3 weeks ago 0 4 min read
We use cookies to provide a personalized experience for our users. By continuing to browse this site, you give consent for cookies to be used.
Got it!
Home > News > Ottawa > Developer intends to preserve landmark Registry Office in high-rise residential extension to Rideau Centre 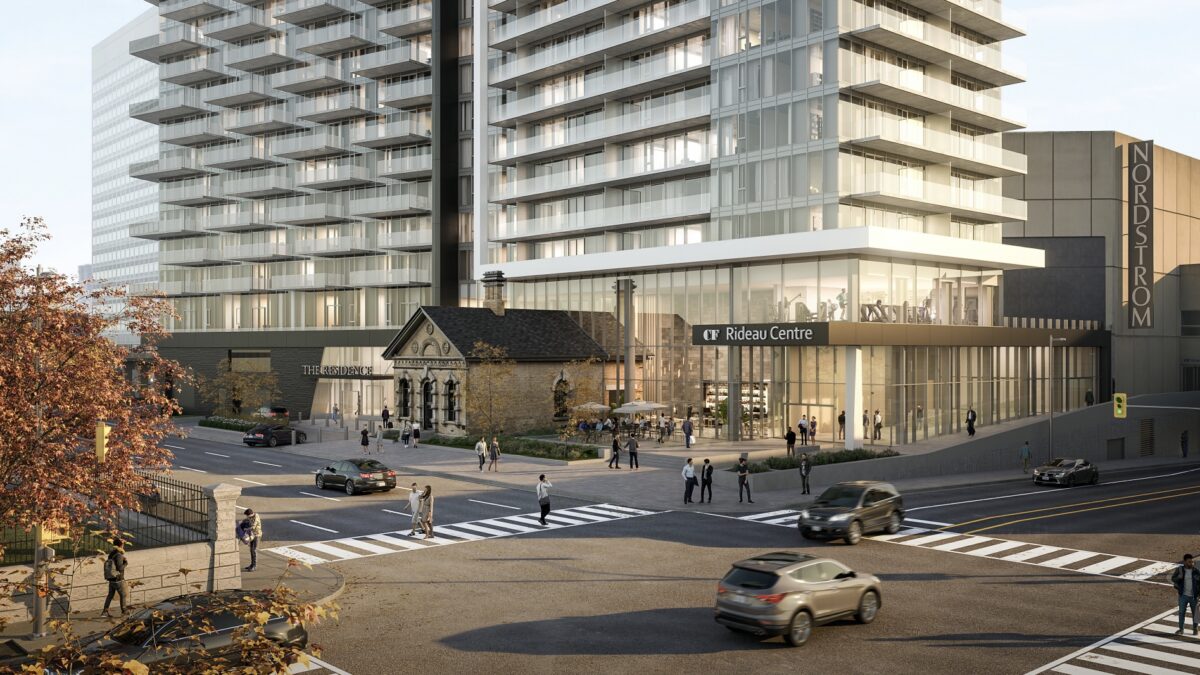 The planned redevelopment of the property around the landmark Registry Office on Nicholas Street would see the heritage building preserved as part of 21-storey high-rise project connected to the Rideau Centre shopping mall. [Illustration courtesy Zeidler Architecture/Cadillac Fairview and City of Ottawa]
Community

By ShriyaBalachandran, 4 weeks ago 0 5 min read

A major redevelopment at the south end of the Rideau Centre would see the city’s landmark Registry Office — a heritage site built in 1874 — preserved within a 21-storey residential high-rise linked to the shopping centre.

Cadillac Fairview, the owner of the Rideau Centre, says it will integrate the historic stone building at 70 Nicholas St. into the residential tower by moving it about 18 metres north. The heritage structure would stand alone but about one-quarter of the building would become part of the ground floor of the new commercial-residential development.

The Registry Office once housed all of the City of Ottawa documents from land deeds to surveys. It was built almost 150 years ago based on a plan designed by Kivas Tully, Ontario’s chief provincial architect in the late 1800s.

Designed with an antique brick and arch facade, rusticated quoins, and classical arched windows, the building’s architecture highlights many features from the time when it was built.

The interior was split into three vault-like storage areas, each for a distinct civic purpose. The structure was built to be protected from the elements with thick walls, a four-metre deep foundation to protect the building from floods, iron doors covering the three vaults, and steel shutters on the windows to protect the contents from fire.

“Inside the building, they originally had a large, steel, fireproof vault,” said David Flemming, chair of the Heritage Ottawa architectural conservation advocacy group, and a member of the city’s built heritage sub-committee.

“And it was on a track,” added Flemming. “When the Registry Office opened in the morning, they would roll this filing cabinet out to the storefront so that if I wanted to come register a new title, they would be able to open the file, bring out the charts. At the end of the day, they would roll it back on the track into the third room, which was a fireproof room.”

The building’s distinct facade connects it to the city’s historic Judicial District which includes the former Nicholas Street jail across the street and the former county courthouse on nearby Daly Avenue. It stands in contrast from modern developments nearby, such as the Rideau Centre.

After its initial use, the Registry Office became the original home of the city’s historical society and later housed the Bytown Museum. It has been vacant for decades.

Cadillac Fairview bought the property from commercial developer Viking-Rideau in 2013.

Flemming said it’s not surprising the building is being repurposed as part of a commercial-residential redevelopment rather than preserved as a parkland space.

“Being realistic, it’s right in the downtown area, so I don’t think we’ve ever been under any apprehension that this building was going to be preserved by Cadillac Fairview as a park,” he said. “We always anticipated that it would be part of a much larger development.”

“Being realistic, it’s right in the downtown area, so I don’t think we’ve ever been under any apprehension that this building was going to be preserved by Cadillac Fairview as a park. We always anticipated that it would be part of a much larger development.”

Mario Santana, an engineering professor at Carleton University, says that whenever a historic building is moved or repurposed, one must always question the ‘why’ behind the plan and what benefits are derived from preservation.

“It’s a question of why are we preserving that building? Why are we just not demolishing the building? What’s the big thought about keeping it?” he said, adding that in this case “there’s an aspect of social coherence. We don’t want to see skyscrapers appear in every inch of the city.”

A cultural impact statement prepared by Cadillac Fairview said the proposed development would be “re-integrating the Registry into its context as a public realm feature with relationship to the courthouse and surrounding streetscape.”

Heritage Ottawa supports integrating the Registry building into the high-rise structure but opposes dismantling 70 Nicholas St. and rebuilding it a short distance to the north.

“Heritage Ottawa is strongly opposed to the dismantling and reconstruction of the Registry Office,” the organization said in a statement. “It would adversely impact the building’s heritage designation and would seriously compromise its historic integrity.”

Santana said that in moving a significantly older building to repurpose it, placing it in context is essential to pay homage to its authenticity.

The initial reception to the application has been positive, said Flemming. However, he added some in the community believe that the redevelopment may not be suitable given the historic value of the Registry Office.

“A lot of people want to leave the property as it is and restore the building and leave the trees around,” he said. “Other people are upset about the large buildings that are going behind it. Some people are saying that it will overwhelm the Judicial Precinct.”

A public meeting was held in March to discuss the project and the proposal will now go through a number of stages of approval at city hall before it proceeds.

Fighting Islamophobia: Ottawa Centre MPP says it's time for non-Muslims to step up