1 week ago 0 3 min read
We use cookies to provide a personalized experience for our users. By continuing to browse this site, you give consent for cookies to be used.
Got it!
Home > Health > Mental Health > Erasing stigma key to helping black Canadians who face mental illness, experts say 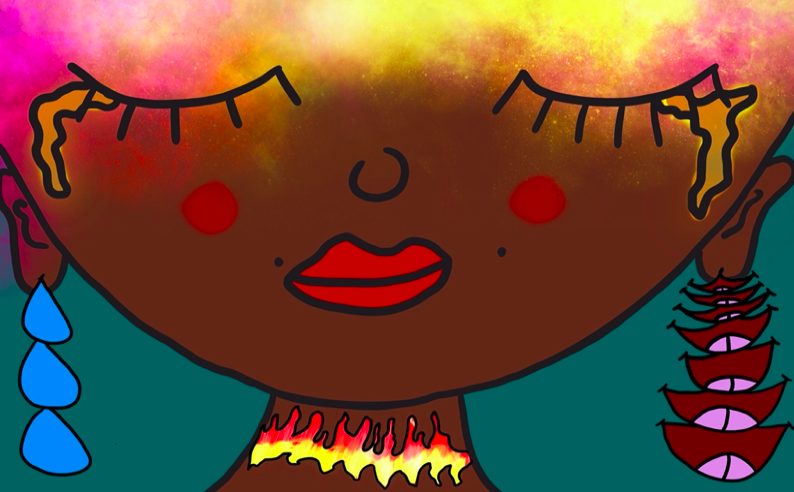 On March 2, in what is planned to become an annual event, Ottawa and other Canadian cities marked Black Mental Health Day. The federal government earmarked funding in the 2018 budget "to develop research in support of more culturally focused mental health programs in the Black Canadian community." [Detail from a graphic © Bella Brooke Grandin, genderqueer multifaceted artist]
Health

On what seemed to be a normal day in her junior year of high school, life would change forever for Esther Acquaah.

Acquaah, now a Carleton University student, remembers she was in her bedroom when she heard a commotion downstairs. Her mother, who had seemed to be in remission from cancer, was unresponsive in the living room. She was rushed to the hospital and put on life support, but she died the next day.

For most teenagers, the last two years of high school are exciting, the beginning of life in the real world.

For Acquaah, now 20, this was not the case. Life during high school was difficult and traumatic. While dealing with these emotions, she was forced to live with unsupportive family members after her mother’s death.

“I would always hear, ‘Go pray about it.’ Nobody offered me real constructive help,” said Acquaah.

Unfortunately, her experience is not uncommon for black Canadians because there are tremendous misconceptions surrounding mental health in the black community. In 2018, the federal government set aside $19 million over five years to support and enhance mental health support for black youth.

“As a first step toward recognizing the significant and unique challenges faced by Black Canadians,” the budget document stated, the government earmarked the funding to “enhance local community supports for youth at risk and to develop research in support of more culturally focused mental health programs in the Black Canadian community.”

On March 2, cities including Toronto and Ottawa marked Black Mental Health Day, meant to be an annual event to confront the impact racism can have on mental health.

However, there is an unspoken stigma within the black community that is a barrier to combating mental health challenges, some experts say. This stigma seems to derive from a combination of African-rooted cultural practices and strict religious beliefs. Modern-day racism also plays a significant role, these experts add. Without dealing with this stigma, help from the government is likely to make barely a dent in the issue, they believe.

Acquaah said strong Christian beliefs brought from “back home” are what creates the stigma in her family.

“I remember having a conversation with my aunt, and she kept saying, ‘No, don’t say depression,’ ” recalled Acquaah.

After her mother died, she was sent to live with her aunt — a devout Seventh-Day Adventist, which a Protestant Christian denomination.

“I was told depression is a demon, so all you have to do is pray to get rid of the demon,” said Acquaah.

In many traditional African communities, there is a belief in the existence of witches, spirits and sorcerers, according to a 2004 article in the journal Medical Humanities. The article, by Dr. Olatunji Francis Aina, a psychiatry professor at the University of Lagos in Nigeria, examines mental illness and cultural issues portrayed in West African films. Many communities in West Africa strongly believe a person’s mental health can be influenced by these “supernatural” agents, the study states.

After examining 163 films, Aina found that 25 of them “contained scenes of psychiatric illness,” that the causes of the illness “were largely attributed to supernatural or preternatural forces,” and that the portrayed treatment for such conditions was typically “through magical means or traditional forms of care.”

“You have people who are very traditional who come with the cultural understanding of the word ‘madness’ to describe people who have mental health issues,” said Nduka Otiono, an assistant professor at the Institute of African Studies at Carleton University.

“I know a black professional who has four degrees in Canada, extremely qualified, who faces mental health challenges,” said Otiono. “But there is a complete inability to come to terms with what they’re dealing with.”

These traditional beliefs can hinder black individuals from seeking help despite their age or level of education.

Michu Jena, a 20-year-old Trent University student and second generation Ethiopian Canadian, describes how she was forced to enroll herself in an outpatient program at the age of 14 because her mother did not understand mental health.

The outpatient program included sessions with a licensed therapist in combination with medication.

After enrolling in the program, Jena was asked to bring a relative or friend to speak about her personal history. She brought her mother.

“My mother said something like, ‘I think she’s doing this for attention,’ ” said Jena.

After watching her daughter take medication and go to therapy for years, Jena’s mother still refused to accept the troubled state of her daughter’s mental health.

“They say your pain is caused by a spirit. It’s because you’re not doing something right, so going to church will help you,” said Jena.

She was told that if she prayed, she would be healed, but Ethiopian cultural practices presented another major barrier to her being understood.

“In Ethiopia you’re always with people. It’s all about community, so there’s no time to be depressed; it’s a collectivist society and they bring that here when they come,” said Jena.

These traditional Ethiopian practices hindered Jena from ever educating her mom about mental health.

“A lot of it is based on religiosity, on the supernatural and some believe it’s a bad spirit that’s being passed around,” said Myrna Lashley, assistant professor in the department of psychiatry at McGill University.

“Sometimes it’s the belief that someone put a spell on you,” she added.

Lashley says the stigma is acted out by “shunning people, hiding the mental illness and making people feel that there is something inherently wrong with them.”

Immigrants of Caribbean, East and West African origin in Ontario have a 60-per-cent increased risk of psychosis, according to a 2015 study published in the Canadian Medical Association Journal. The study, titled “Incidence of psychotic disorders among first-generation immigrants and refugees in Ontario” and led by Western University psychiatry researcher Kelly K. Anderson, also noted “experiences of interpersonal racism, as well as the perception of societal racism, have both been shown to have an independent effect on the likelihood of a psychotic disorder.”

This study has been highlighted by the Black Health Alliance, a Toronto-based charity working to improve the health and well-being of black communities in Canada.

Many black people live with undiagnosed mental illnesses. Acquaah, who refrained from receiving professional help for more than three years, was one.

“In my first year of university, I just partied. I literally did anything and everything to not have to face those feelings,” said Acquaah. “In my second year, I was constantly having breakdowns and my grades were slipping so badly,” she added.

When Acquaah was put on academic probation, she realized she could no longer face her mental health issues alone. Early in the 2019-20 school year, Acquaah finally visited Carleton’s counselling services. “I talked to a therapist,” she said. “It was amazing, and I left my first session with hope.”

The stigma, however, is complex and some argue there is a deeper layer.

“In a more modern context, the stigma is often the need to not show white people that there’s something wrong with the community. It’s the concept of internalized racism,” said Lashley.

Some see the black community as “unhealthy” because of historical stereotypes around drugs and crime. “You may internalize these ideas, even though they’re not true, and it’s possible you may hide your challenges to look ‘normal’,” she added.

Jena, who was consistently offered help from black teachers at her high school, said she would often hear: “You’re a black woman. You need to work harder because we have a social disadvantage.”

The message, which Jena said she appreciated, was to turn her adversities into strengths. “But how is every single depressed black child supposed to do that?” she said.

She said she believes the best way of combating the stigma is to educate teachers on the topic of black mental health specifically.

Warren Clarke, who is completing a doctorate in sociology at Carleton University, and has specific research interest in race, ethnicity, anti-colonialism and gentrification, says the issue is broader.

Clarke argues the stigma lies in the fact that Canada is anti-black. “The anti-blackness disrupts us from appreciating our humanness and clearly impacts our mental health,” said Clarke.

When asked how this could be combated within the black community, Clarke said: “We need to acknowledge that the word ‘blackness’ is problematic, it’s only used in western civilizations … We were told we were black. We didn’t choose this term.”

For Clarke, there is no way of escaping the historical narrative of this term and who it was applied to. He says this is where the stigma is derived from.

But slowly, younger generations within the black community are breaking the stigma.

Acquaah and Jena willingly chose to seek professional help, rather than struggle alone in silence.

“There are still some traditional older people who are willing to be educated,” said Acquaah, adding that she believes there is hope in breaking this barrier.

There is still a long road ahead before the stigma that is deeply buried in traditional roots can be erased.

But the resilience of a community that has overcome centuries of racism — including slavery in early Canadian history — may offer hope that the stigma among black Canadians around mental health will soon become a thing of the past.

In The News: Thursday, May 7