3 days ago 0 2 min read
We use cookies to provide a personalized experience for our users. By continuing to browse this site, you give consent for cookies to be used.
Got it!
Home > News > Canada > Quebec > Experts debate the gamble by Quebec, Alberta and Manitoba on a vaccine lottery 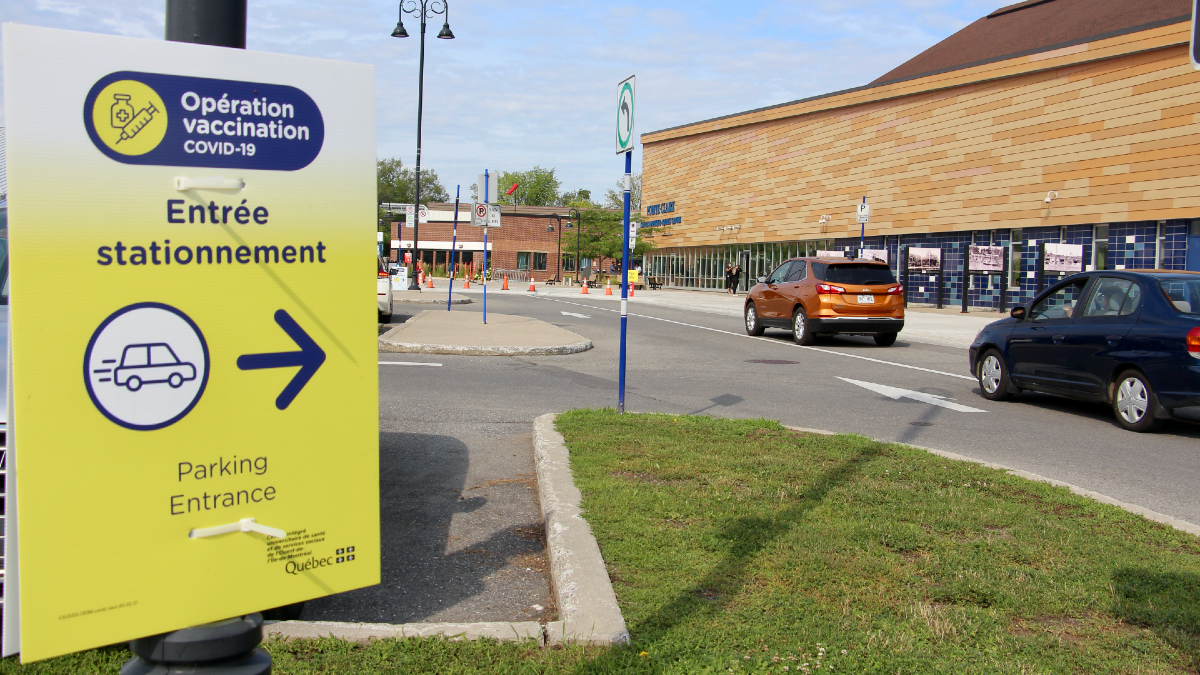 Cars drive up to one of Montreal’s vaccination centres. The provinces hopes to get more lining up to get a jab through a lottery. [Photo @ Rachel Watts]
Alberta

In partnership with Loto-Québec, Dubé says this campaign, called “Gagner à être vacciné!”, will aim to prevent hospitalizations and help bring Quebec closer to getting 75 per cent of the province vaccinated in every age category by Sept. 1.

To be eligible, Finance Minister Eric Girard, said Quebecers need to opt in online after receiving both doses by Aug. 31 – meaning those who want to participate will need to get their first dose by no later than July 31.

More than 10 million COVID-19 vaccine doses have been administered in Quebec. On the July 16 press conference Dubé said 82 per cent of all eligible Quebecers have received their first dose, but in some age groups the percentage of people who received at least one dose is less than 75 per cent. He noted that among those age 18-34, there are still 80,000 who need to be vaccinated to reach the 75 per cent goal.

“Each percentage point is worth 75,000 new people being vaccinated, so is it worth it? I think every penny is worth it at this stage of the game to ensure we are ready for Sept. 1,” said Dubé referring to the lottery.

Although there are hopes for high turnout as a result of this incentive, the move towards implementing lotteries in Canadian provinces is also raising questions about “fairness” and “ethics” — with some suggesting the plan could pressure individuals, breach privacy or disadvantage some unvaccinated groups.

Understanding the controversy comes down to identifying the difference between inducement and coercion, says Scott Halperin, a Canadian immunologist and director of the Canadian Centre for Vaccinology in Halifax. He says that it is important to “draw the line” between these two very different concepts in relation to a vaccine campaign.

Although the vaccine lottery may make it seem as though vaccinated individuals are being directly compensated, even rewarded, for their decision, he says it is not that simple, since lotteries make it clear that no one can be guaranteed to win.

He says this initiative is also classified as an incentive because it aims to reduce risk.

“You’re not asking people to take a risk by getting vaccinated,” says Halperin. “In fact, all the science shows that you’re giving them an inducement to put them themselves at a lower risk. So that’s very important too. If you were giving somebody an inducement to say jump off a bridge… the ethics of that would be highly questionable, but in this case, you’re decreasing a person’s risk of getting COVID and having a severe outcome, because we have more and more data now showing that the vaccine is highly effective.”

It’s mainly an “attention grabber” says Halperin. He says these kinds of initiatives target “vaccine hesitant” individuals, or those who have simply not received their doses out of convenience, rather than those who are generally anti-vaccine.

“The people, who were philosophically or absolutely for whatever reason against immunization, either COVID specific or any immunization, are not going to be affected by a lottery,” says Halperin. “It’s more for the people who just can’t be bothered. … They’re not against it, they just aren’t motivated to do it. And (the lottery) is trying to provide some incentive and some motivation to capture their attention.”

This is particularly relevant due to the fact that the biggest age group lacking immunization is Canada’s younger generation, or those age 20 to 34, says Halperin.

In Quebec those age 18-29 have the lowest rate of immunization with 66 per cent of the age group having received at least one dose of the vaccine.

There is no evidence to show that this group is inherently anti-vaccine, says Halperin. He notes that many of these young adults are “just busy doing other things”. He says that for this age group, incentives can allow for vaccines to become a real “priority”.

While cash prizes might induce some, Michelle Driedger, professor in the University of Manitoba’s Department of Community Health Sciences, says they can have the opposite effect in some communities on the margins.

Following the implementation of Manitoba’s vaccine lottery, announced in June, Driedger has been part of focus groups in communities in Manitoba which have historically low rates of routine immunization.

She says these groups of people, many of whom routinely accept other forms of immunization, have not made their decision regarding the COVID-19 vaccine.

Driedger says one of the participants in these focus groups mentioned that the Manitoba lottery prizes, offering a maximum of $100,000 each, was “way too low” to get somebody to completely put aside their beliefs.

“The prize money would have to be much, much higher and even then, putting aside your belief, just for a chance to win is really not going to be something that’s going to work for many,” says Driedger, also the Tier II Canada research chair in Environment and Health Risk Communication.

Another concern relates to privacy, notes Driedger. She says one major difference between Quebec and Manitoba’s lottery approaches relates to how they use people’s data.

The concern over the latter method is that it could result in personal, confidential information getting released, says Driedger. Even though all lottery prize winners in Manitoba are consulted before their names are released to the public, she says it can still act as a major concern for those worried about confidentiality.

“There are some real tensions in particular communities where some people who have made the choice to get a vaccine, have been reluctant to share with others in their network,” says Driedger. “And so for those individuals, that privacy around having been vaccinated, is very important, because they don’t want to jeopardize relationships with other members of their family who maybe have strong views.”

These ethical considerations are important, says Halperin, but he notes the move to introduce similar initiatives across Canada is mostly likely going to be weighed looking at the gaps in immunization.

Despite the ethical considerations for these lotteries, he says lotteries may become more popular but will directly depend on the results and data from provinces who introduced lotteries, including Alberta, Manitoba and Quebec.

“I think each province will look at their immunization rates, I think they will look at where their gaps are in terms of the population who has been immunized … and who are the demographic that tend to be affected by lotteries … because not everybody will see a lot of reason or inducement (through lotteries),” says Halperin. “They do work but they’re not the whole answer.”