2 weeks ago 0 1 min read
We use cookies to provide a personalized experience for our users. By continuing to browse this site, you give consent for cookies to be used.
Got it!
Home > Health > Women > Experts debate whether porn-fuelled fantasies are driving bedroom violence 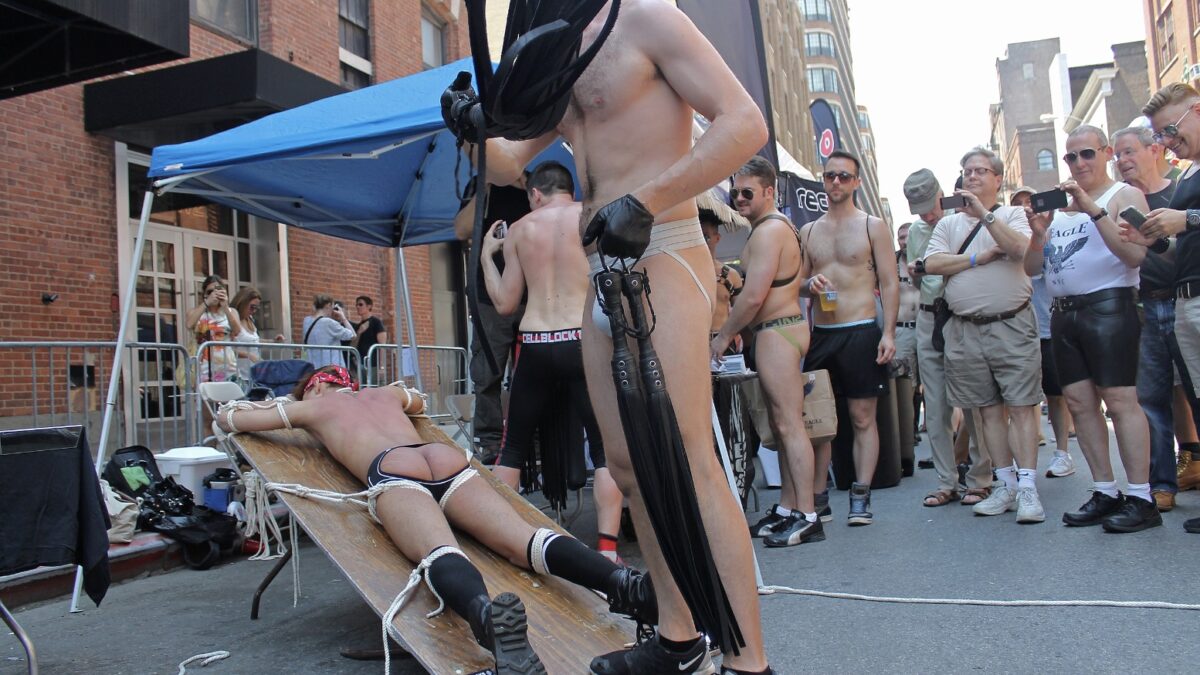 Members of the New York City fetish community showcase bondage and spanking pleasures at a 2016 street festival. The popularity of the blockbuster Fifty Shades of Grey book and film series — which has exposed a much wider population to fictional encounters between leather-bound lovers — has raised questions about whether pornographic depictions of rough sex are fuelling illicit acts of sexual violence. [Photo © istolethetv/Creative Commons]
Life

Those are just some of the kinky-sex practices that have become increasingly popular in recent years, edging their way from the margins and into the mainstream.

Some have welcomed the shift as liberating, one that has inspired people to experiment in the bedroom. They point to the success of the Fifty Shades of Grey book and film franchise, which left millions around the world entranced with its portrayal of rough, leather-clad sex.

A study in the summer of 2012 by researchers at Sheffield Hallam University in the U.K. found that 86 per cent of women who had read the trilogy reported that it had influenced their opinions of sex, and 67 per cent said they found this form of sex a turn-on.

A 2019 study by researchers at the Indiana University School of Public Health found that one-quarter of women surveyed said they had felt scared during a sexual situation; most identified a choking episode as the incident that had frightened them.

“There are a ton of men doing this s**t because they think it’s what women want,” says Cindy Gallop, founder and CEO of the company MakeLoveNotPorn, which promotes healthy, consensual sex.

Sexual violence is the only type of violent crime that is not declining in Canada, according to a 2018 StatsCan report. More than 4.7 million women and 1.2 million men, outside of an intimate relationship, said they have been sexually assaulted at least once after age 15, according to the report.

A spate of court cases in Canada and other countries has thrust the issue of rough sex into the spotlight. In 2014, then-CBC radio host Jian Ghomeshi was charged with several counts of sexual assault and one of overcoming resistance by choking. He argued the acts were consensual, and was acquitted in 2016. More recently, trucker Bradley Barton was found guilty of manslaughter in 2021 after a Winnipeg woman died from a severe vaginal tear after what he claimed was consensual sex.

Meanwhile, in the U.K., public outrage over a series of court cases in which men argued their partners had consented to rough sex that left them dead or severely injured has prompted lawmakers to ban the so-called “rough sex defence.”

Is pornography to blame for the normalization of sexual violence? Experts are divided.

“I think that children’s exposure to violent pornography teaches children that sex and violence belong together and we’re not giving them another script,” Evans continues. “I think it’s difficult to teach consent when we’re showing a barrage of non-consensual activities.”

‘I think that children’s exposure to violent pornography teaches children that sex and violence belong together and we’re not giving them another script.’

Research has shown an association between watching pornography and practicing rough sex: in a 2019 survey of young adults who regularly watched sexually explicit material, researchers found that almost half of the participants said they had engaged in four or more rough sex acts. The U.S. study was published in the Archives of Sexual Behavior.

He warns: “And more importantly, they’re giving particularly men — and very aggressive men — ideas on what sex should look like that translates to the bedroom.”

Leeds said he sees these depictions in his store during every shift. In ads or in previews, women are portrayed as helpless or needy, while the man “has this stark look on his face, and this bravado that’s so overwhelming.”

These stereotypes hurt men as well as women, according to Vice reporter Louis Staples. In his July 2021 article, “How It Feels Being a ‘Vanilla’ Man in Bed,” Staples said that some men feel pressure to engage in rough sex to avoid being mocked for being too conventional. Staples cited the experiences of several male sources, and points to social media trends, such as Tik Tok videos under the hashtag #FreakTok, that promote kinky sex and make fun of those who don’t engage in it. Some of these videos have been viewed more than a million times.

Some say the popularization of rough sex is not solely because of the influence of porn, but it is also an unintended effect of the sexual revolution, with men turning women’s sexual freedom to their advantage. In her February 2018 article, “That’s patriarchy: How female sexual liberation led to male sexual entitlement,” The Guardian columnist Van Badham writes that “the flipside to the de-stigmatisation of sex for women has been a sense of patriarchal entitlement to sex with women,” pushing the idea that women want sex, and the same kind of sex, just as much as men do. In this way, women can find themselves coerced into sexual situations, expected to participate in what their partner initiates, she argues.

‘Sex positivity is just, have the sex that you want to have, and if that’s vanilla sex once a month with the lights off with your husband — cool.’

“Sex positivity is just, have the sex that you want to have, and if that’s vanilla sex once a month with the lights off with your husband — cool,” she says. “It’s then also supporting (you) if you want to have sex with your eight non-monogamous partners while suspended from the ceiling while doing it on camera — also rock on.”

It’s that kind of consensual sex that Cindy Gallop wants to showcase with her company, MakeLoveNotPorn, which has more than 400,000 members from around the world. She started the company in 2009 to become “what Facebook would be, if Facebook allowed you to socially, sexually self-express.” Gallop’s platform, through comprehensive consent checks and a careful curation process conducted by real employees, lets people submit videos of themselves having sex naturally and non-performatively, which Gallop says is unlike pornography.

“Currently, sex is an area of rampant insecurity for every single one of us. … You are terrified that if you say anything at all about what is going on . . . you will potentially hurt the other person’s feelings, you’ll put them off you, you will derail the encounter,” Gallop says. “But at the same time, you want to please your partner; you want to make them happy. Everybody wants to be good in bed. Nobody knows exactly what that means.”

She gives the example of simulated rape, emphasizing how crucial conversations about consent are, before, during and after.

“At any point in time, I can stop it,” she says. “There’s a power that we gain from being put in a position like that again, and being able to say no, and it’s done.”

“I am listening to their physical cues,” explains Steele, whose real name is Susan Davis. “It is your role to ensure that they’re comfortable throughout the whole thing, and that nothing bad happens to them.”

Without step-by-step consent, practices such as choking, slapping, punching or any other form of so-called kinky sex are nothing more than assaults, plain and simple, she says. “A person who doesn’t pay attention to those cues is a criminal committing an assault and that’s not really sex. It’s a crime.”