4 days ago 0 4 min read
We use cookies to provide a personalized experience for our users. By continuing to browse this site, you give consent for cookies to be used.
Got it!
Home > News > Ottawa > Group pushes for overhaul of Parks Canada’s draft management plan for Rideau Canal 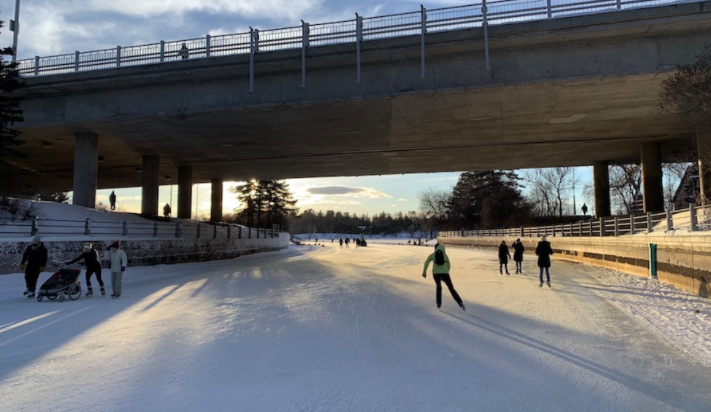 As skaters glided along this past winter, the future of the Rideau Canal has been under discussion as Parks Canada prepares a management plan for the historic waterway. [Photo © Phalen Tynes-MacDonald]
Canada

The first draft of Parks Canada’s long-overdue 10-year management plan for the Rideau Canal has “deep and substantial” problems, says a group dedicated to the preservation and promotion of the historic waterway.

In the midst of public consultations about the Canal’s management plan, the Friends of the Rideau is expressing disappointment in the federal agency’s blueprint for the nearly 200-year-old, 200-kilometre-long route between Kingston and Ottawa.

Six years overdue, the final draft of the Rideau Canal National Historic Site management plan will set Parks Canada’s strategy to protecting and promote the waterway over the next decade. Significantly, that time period will include the bicentennial of the start of the Canal’s construction. It was built between 1826 and 1832.

While consultations were conducted in-person in the past, but the pandemic has put public input online. Feedback is also being handled by a survey and five scheduled consultations ending March 31. Members of the public are being encouraged to review the draft and respond to the survey or register for one of the live sessions. The last two are March 24 and 31.

“These consultations are really poorly done. … It’s a directive survey basically seeking the answers Parks Canada wants to see,” said Ken Watson, a Friends of the Rideau director and heritage expert who took part in consultations for the previous management plan implemented in 2005.

Watson said that in January 2018, three years after the previous plan expired, Parks Canada invited him to a meeting to discuss the drafting a new management plan. “These were full-day sessions talking about our visions for the Rideau Canal,” he said, with the main focus of the meetings he attended being heritage and ecology.

“None of that is in the draft plan and that’s an extreme worry for many of us,” said Watson.

Since those 2018 consultations, the plan was delayed further. After receiving a letter that consultations would resume this year, Watson said there was no information as to how they would be conducted or what the timeline would be until Parks Canada posted its draft and accompanying survey on Jan. 26. The live general public consultations were announced on March 2, two days before the first session.

Watson’s main complaints are less about what’s in the plan and more about what isn’t.

“The plan contains lots of ambiguous wording with soft, unquantifiable targets,” he said.

For example, he pointed to “Key Strategy #2: Demonstrating Excellence in Sustainability, Protection and Presentation,” in which the goal is to have at least “70 per cent of engineering works of national significance” maintained in fair or good condition along the Canal.

“It means they’re willing to leave up to 30 per cent of (engineering works) in poor or very poor condition,” said Watson. “That’s unacceptable. There should be a commitment to all built heritage.”

Hunter McGill, Friends of Rideau chairman, said he hopes for a better version of the management plan mainly because of its “complete failure to meet Parks Canada’s heritage and ecological mandates, and it doesn’t address UNESCO’s concerns” regarding the Canal’s protection.

Designated a UNESCO World Heritage Site in 2007, the Rideau Canal is the oldest continuously operated canal in North America. It’s considered to be of outstanding universal value to world heritage for being the continent’s best preserved “slackwater” canal, because of its continued operation since the 19th century and for being an example of a canal built for military purposes.

According to the UNESCO World Heritage Convention, the commitments the Canadian government made when the site was designated include the “protection, conservation, presentation and transmission to future generations of the cultural and natural heritage” of the Canal.

UNESCO told the federal government in 2019 that it was not following through on its responsibilities to protect the Canal. It asked Parks Canada to update its management plan to address the definition and protection of the Canal’s “outstanding universal values.”

The concerns included the controversial expansion proposal for the Château Laurier hotel — which is located adjacent to the Canal’s entrance locks at the Ottawa River — a lack of resources to educate property developers on their role in protecting the Canal’s heritage, and a lack of public awareness of its scenic and cultural values. The design has been revised to include more stonework to echo the original hotel’s heritage character. It has been approved by city council. The design is being reviewed by National Capital Commission.

“It’s a little disappointing that there was no particular reference to Smiths Falls (in the plan). The Canal is a major draw to our town,” said Smiths Falls Mayor Shawn Pankow. He added that the lack of a management plan over the past six years has left the town uncertain about what Parks Canada’s priorities are and “has held back some of the projects we’d like to see completed.”

Smiths Falls, 80 kilometres south of Ottawa, is home to the only decommissioned lock on the Rideau Canal, and Pankow said he hopes Parks Canada will identify and develop it as a tourism opportunity.

“It needs some attention … it’s a real historical piece,” he said, pointing out the educational value of “being able to take people back in time to the 1830s when the canal was constructed.”

Watson was also critical of Parks Canada’s lack of awareness campaigns despite its mandate to foster public understanding. “There seems to be no consequences” from what Watson characterized as a failure to adequately carry out public education responsibilities. “Parks Canada is simply accountable to itself and, on the Rideau Canal,” added Watson, “it is not holding itself to account.”

To raise awareness about the heritage of the Rideau system, Watson designed his own website, with sections dedicated to the history, ecology and navigation routes along the waterway.

“That’s what Parks Canada should be doing,” he said, chuckling. “If I can do this as a single person with a budget of zero, why can’t Parks Canada?”

Watson said his bid to pressure Parks Canada to do more to protect and promote the canal will probably be a lifelong lobby: “I don’t know if we’ll ever win. But like any other thing you believe in, you’ve got to keep trying.”