5 days ago 0 3 min read
We use cookies to provide a personalized experience for our users. By continuing to browse this site, you give consent for cookies to be used.
Got it!
Home > News > Ottawa > Group says hundreds more trees to be cut on new Civic campus site than expected 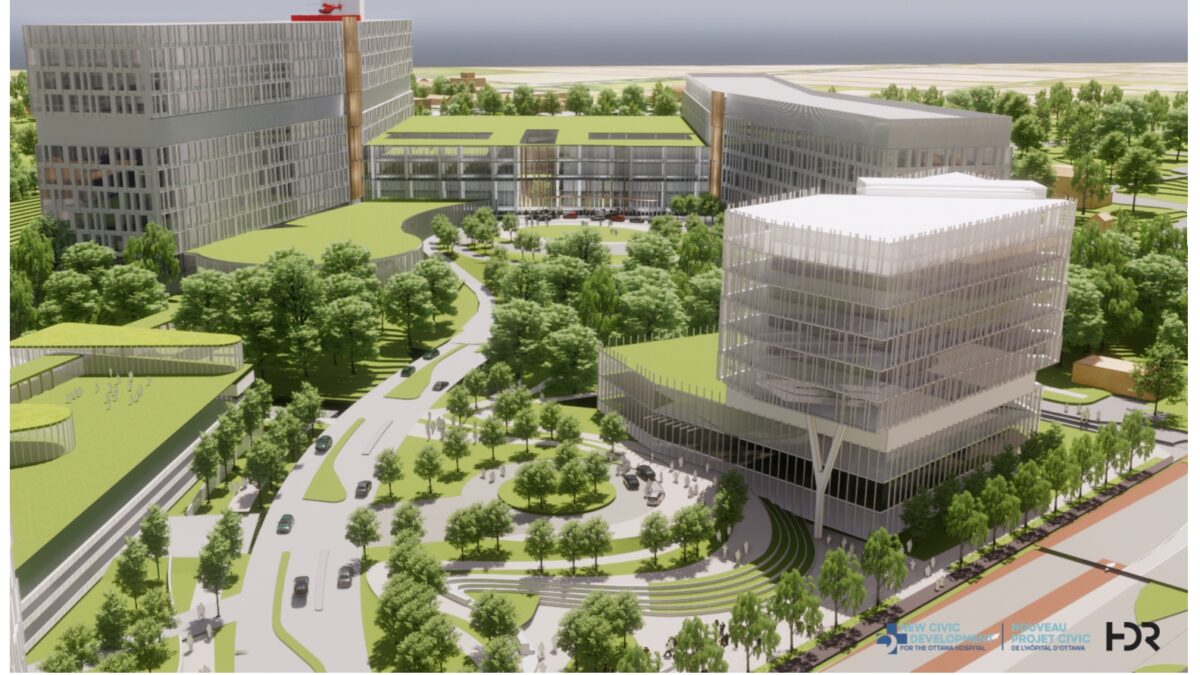 Designs for the new Civic campus of The Ottawa Hospital were released in May. Critics argue that the design of the site's parking garage will force the removal of hundreds more existing trees than originally planned. [Image courtesy The Ottawa Hospital]
News

ReImagine Ottawa, an advocacy group fighting against the Ottawa Hospital Civic Campus relocation to the northeast corner of the Central Experimental Farm, says it has found an inconsistency between the master plan and the site plan for the new hospital’s parking garage — a discrepancy that seems to show up to three times more trees being cut down.

Since it was announced, the planned relocation of the Ottawa Hospital’s Civic campus to a site just west of the corner of Carling Avenue and Preston Street has been scrutinized by advocacy groups upset about the loss of green space and tree cover at the eastern gateway to the historic, federally owned farm.

ReImagine Ottawa says the master plan for the relocation originally envisioned a loss of 119 trees, but the site plan now identifies 358 trees that will be lost solely for the facility’s main parking garage.

“The degree of error in the Phase 2 ‘Tree Conservation Report’ does not bode well for future site plans,” ReImagine Ottawa said in a Nov. 5 media release. “Deviations like this will put tree loss on the completed site into the thousands. This is not only irresponsible and unjustifiable; it also could be perceived as deliberately deceitful.”

While the hospital has not acknowledged these new concerns, the website for the development says “the hospital will plant five new trees for every tree that needs to be removed (during construction), in partnership with the Central Experimental Farm, Agriculture and Agri-Foods Canada, and the City of Ottawa.”

Valerie Swinton, a volunteer with ReImagine Ottawa, said the group is attempting to dig deeper into the environmental impact reports for the new campus to bring concerns to the city’s planning committee promptly. She expressed disbelief at just one part of the soon-developed green space.

“Can you imagine?” Swinton said. “Five acres of above-ground garage?”

An early relocation plan put forward under the Conservative government of Stephen Harper called for the new hospital campus to be built on a section of the farm directly across from the current Civic site near Carling and Parkdale avenues. That was rejected after the Liberal government of Justin Trudeau came to power in 2015.

The National Capital Commission then proposed Tunney’s Pasture north of Scott Street for the relocated hospital site, an area previously developed for federal buildings in comparison to the centrally situated green space eventually chosen for the new Civic. The project involves the transfer of federally owned escarpment lands at the site of the former Sir John Carling Building for the new hospital.

Swinton said hospital officials have stonewalled the group’s opposition to the location.

“We don’t feel that any National Historic Site (such as the Central Experimental Farm), particularly one with 100 year old trees and a huge inner-city green space, should be taken when Tunney’s Pasture is flat, does not have a fault line, and does have good transportation,” Swinton said.

Construction of the new Civic parking garage is to begin in March 2022 and take up to 24 months to complete. As development looms, Swinton didn’t provide any option they would settle for outside of completely removing the hospital relocation from the Dow’s Lake area.

“We’re ready to tie ourselves to trees,” Swinton said. “We just feel we have to fight it to the very last tree if we have to, and not give up.”