2 weeks ago 0 1 min read
We use cookies to provide a personalized experience for our users. By continuing to browse this site, you give consent for cookies to be used.
Got it!
Home > News > Ottawa > UPDATE: City to consider renaming street to honour Mahsa Amini and send message to Iran 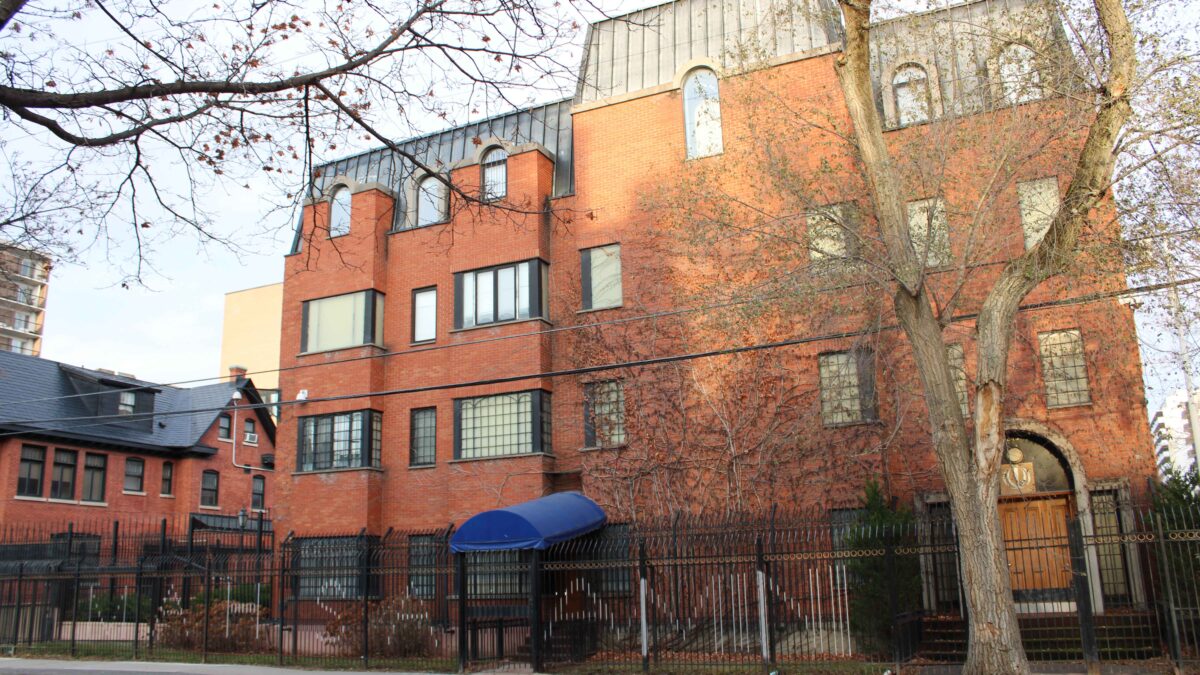 The shuttered former Iranian Embassy at 245 Metcalfe St. Anti-regime protestors wrote "Mahsa Amini" on the fence in front of the building, a tribute to the young woman whose death in Tehran in September sparked the ongoing uprising against Iran's religious dictatorship. [Photo © Dennis Kovtun]
Canada

The Jewish human rights organization, B’nai Brith, wants the City of Ottawa to rename part of Metcalfe Street, where the shuttered Iranian embassy is located, after Mahsa Amini — the young woman whose death in Tehran in September sparked an uprising against the country’s religious dictatorship.

B’nai Brith is now applauding a notice of motion tabled at city council to consider the name change in the new year.

“We are pleased that, in the not-to-distant future, Ottawa City Council and Mayor (Mark) Sutcliffe will be discussing and considering this important motion,” said David Granovsky, B’nai Brith Canada’s director of government relations in a media release. “We are delighted that Councillors Theresa Kavanagh and Ariel Troster (who seconded Kavanagh’s motion) saw fit to ensure this was tabled for January.”

Amini was the 22-year old Kurdish-Iranian woman who died as a result of her time in custody of the Iranian “morality police,” which enforces strict religious laws. On Sept. 13, while visiting Tehran, the country’s capital, she was arrested for improperly wearing her hijab — which is compulsory in Iran for women.

While in custody, she was allegedly tortured, according to her cousin. Two hours after her arrest, she was transferred to a local hospital, where she died two days later.

Amini’s death has sparked massive anti-regime protests in Iran, which have now continued for three months. One of the best-known slogans of the protestors is “Woman, life, freedom.”

Iran has one of the worst human rights records in the world, including its oppression of women. At least 300 protestors have been killed since the protests began, the regime acknowledges.

The former Iranian embassy, at 254 Metcalfe St., has been closed since 2012. That’s when the Canadian government suspended diplomatic relations with Iran, citing its nuclear program, intense hostility to Israel and its assistance to the repressive regime of Bashar al-Assad in Syria.

However, the building is still owned by the Iranian government.

“Recently, the City of Ottawa decided to make a gesture to stand in solidarity with the people of Ukraine,” Marvin Rotrand, B’nai Brith’s national league of human rights director, recently wrote in a letter to Ottawa Mayor Mark Sutcliffe. “Ottawa installed new ‘Free Ukraine’ street signs in front of the Russian Embassy in Sandy Hill to protest Russia’s military invasion of Ukraine. We are making a similar request for the Embassy of Iran.”

Rotrand asked that the city post the signs designating the portion of Metcalfe Street where the Iranian embassy is located as Mahsa Amini Street.

“It would be a powerful statement of solidarity with the long-suffering people of Iran,” Rotrand wrote.

In an interview, Rotrand elaborated on the group’s street-name campaign.

“First and foremost, we’re a human rights organization,” he said. “We fight anti-Semitism, but we also partner with other minority groups, racial and religious minorities, to come up with common positions to fight hate. We’ve been preoccupied with Iran for a long time. We see Iran as one of the prime exporters of anti-Semitism in the world.”

“It’s been a big issue for the Jewish community, and in particular B’nai Brith, for many years now,” B’nai Brith CEO Michael Mostyn told Capital Current. “We have constantly been showing our solidarity with the Iranian people in the face of very severe human rights violations.”

Rotrand said renaming a portion of the street would be a good demonstration of solidarity with the Iranian people and the Iranian diaspora in Canada.

“It’s another statement of rebuke by the Canadian people.”

B’nai Brith urged Sutcliffe to either pass a motion at Ottawa City Council or take administrative action to rename the portion of the street, then put up plaques and signs to explain Mahsa Amini’s story and recent events in Iran.

While Rotrand said Canada must respect Iran’s ownership of the building — which falls under international law and cannot simply be confiscated — “that doesn’t stop us from clearly indicating to the public that this evil place is connected with the regime in Iran that killed Mahsa Amini and so many others, and we put up plaques to show our disdain of them and our support for the victims.”

The initiative to rename a portion of the street came out of a sense of solidarity that B’nai Brith felt with the Iranian protestors, Mostyn said.

“The thought was — with what we’re seeing with the protesters in Iran, how can we continue to show our solidarity on behalf of our human rights organization with the Iranian people. The idea sort of generated from there in terms of what is something more that we can do as an organization.”

Mostyn added: “We think that there could be very powerful symbolism to renaming this portion of the street in Ottawa.”

The current regime in Tehran is violent and vicious and doesn’t represent the Iranian people, he said.

“So imagine the symbolism, that one day, that embassy will reopen. One day Iran will be welcomed back to Canada. But, hopefully, that day is the day that is no longer this regime that is in charge,” Mostyn said, envisioning a time when Iran has a democratically elected representative government.

“And by looking at that name on that street, hopefully, they will recall that this was a turning point.”

Kaveh Shahrooz, a lawyer and a senior fellow at the Macdonald-Laurier Institute’s Centre for Advancing Canada’s Interests Abroad, said B’nai Brith’s initiative is likely to be received positively in the Iranian-Canadian community.

“Iranians have been asking for solidarity from other communities for a long time, and I’m glad that we’re seeing solidarity coming from all sorts of communities. We’re happy to accept support and solidarity from anybody that stands up for human rights and thinks that Iranians should be able to live free,” he said.

“They want this regime to be shamed. And I think this is an important way of doing so here in Canada,” he added.

“I know that they keep very close tabs on what happens in this country,” said Shahrooz. “And so it’s very likely that this will be reported back to regime officials, their foreign ministry and so on. And I think they will get the message that they are not welcome here — that particular regime is not welcome here.”

He also pointed out that the Iranian regime has resorted to such a tactic in the past, when in 1981 it renamed the former Winston Churchill Boulevard in Tehran — where the entrance to the British embassy was located — after Bobby Sands, an IRA member who died as a result of his hunger strike in HM Prison Maze. Sands was arrested as he and his confederates were fleeing the scene of the  Balmoral Furniture Company showroom bombing in Dunmurry in 1976 — a bombing that Sands helped plan. He was sentenced to 14 years for possession of a revolver.

Renaming the street after an IRA member was the Iranian regime’s “way of kind of annoying the British,” Shahrooz said.

“I think it’s only fair that we take similar steps here in Canada with respect to [the current Iranian regime],” he added.

Shahrooz said that while renaming a street is largely symbolic, it can nevertheless contribute to the promotion of human rights in Iran in a practical way. While municipal governments don’t have a say in foreign policy, a symbolic act like this can send a message to Canada’s government and signal that local communities, such as Ottawa, expect Canada to demonstrate greater solidarity with oppressed citizens in other countries.

Rotrand also expects the initiative to generate more awareness among Canadians of human rights violations in Iran. The spot that is proposed to be renamed is located in a high pedestrian traffic area, and is fairly close to Parliament Hill. It may also reinforce the efforts of B’nai Brith to “call out Iran and expose it, so that the world community finally does something.”

Rotrand said he is optimistic about the petition’s success. He said that Sutcliffe’s staff wrote back to B’nai Brith 29 minutes after receiving their letter, saying they were seriously looking at the proposal.

Capital Current has approached Ariel Troster, the newly elected councillor for Somerset Ward, where the former embassy is located, for comment several times. Troster has so far declined to comment on the renaming proposal.