4 days ago 0 2 min read
We use cookies to provide a personalized experience for our users. By continuing to browse this site, you give consent for cookies to be used.
Got it!
Home > News > Social Issues > Group wants public washrooms part of Ottawa’s Official Plan 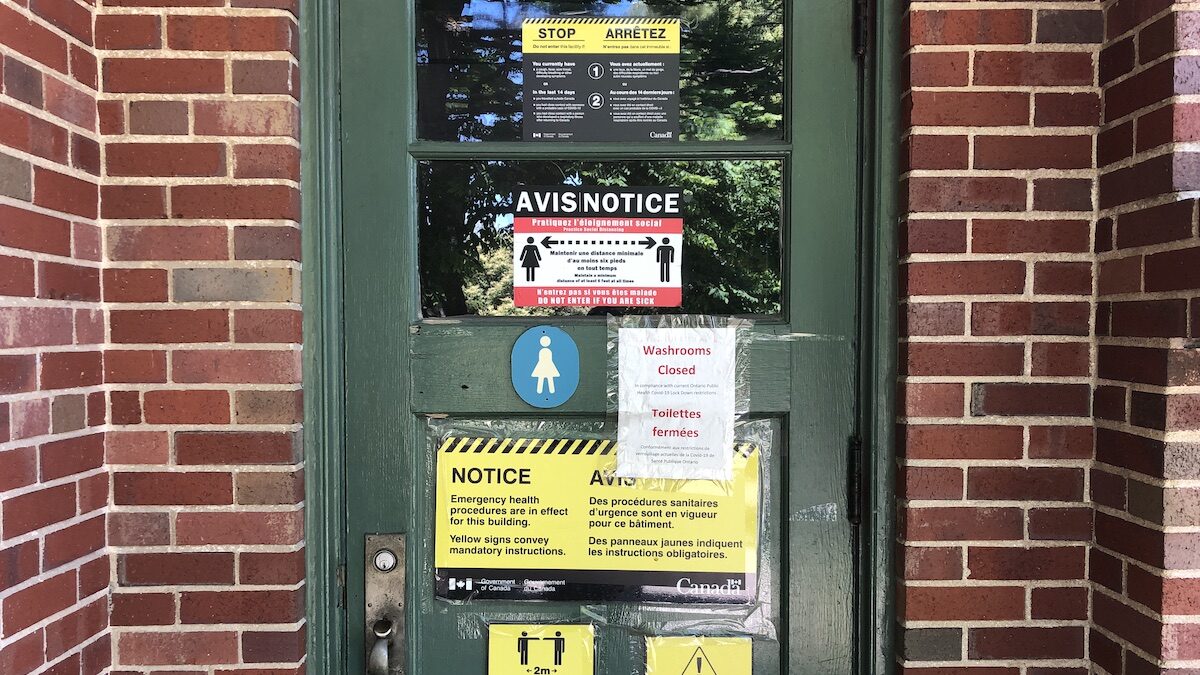 As of June 17, the public washroom at the Central Experimental Farm was closed. It is one of only two public washrooms that serve the Dominion Arboretum area. [Photo © Rebecca dePencier]
Community

As staff considers a final draft of the city’s Official Plan, the advocacy group GottaGo! Ottawa is injecting new urgency into their pressure to include a network of accessible public washrooms as part of the city’s future.

The plan is headed for implementation this fall and will guide development until 2046. The current draft only mentions public washrooms once.

The group has sent an open letter calling for safe, clean and accessible public toilets. It was sent to Mayor Jim Watson and city council on May 17.

Forgie highlighted areas of the plan that could include improvements such as public washrooms but said that the Official Plan’s role “is not to identify a strategy for the provision of public washrooms.”

An interim report to address community concerns about the Official Plan was released June 10 and made no mention of the continued push for public washrooms.

“We are always engaging with the city and our engagement is based on partnership,” says Lui Kashungnao, of the GottaGo! campaign. “How can we support you to make Ottawa an inclusive and livable city?”

As it stands, city planners are priorizing self-contained neighbourhoods where services, amenities and businesses are within easy walking distance, the so-called 15-minute neighbourhood.

“The key message of the New Official Plan is that Ottawa has to be a walkable, livable city,” says Kashungnao. “So how can you make a walkable city, when there is no public toilet?”

A representative from the Mayor’s office stated that “Mayor Watson looks forward to seeing the Official Plan before Committee and Council this fall, and for a healthy debate at that time.”

None of the city’s councillors responded to repeated requests for comment.

GottaGo! Ottawa has has success in the past. In 2014, the group submitted a petition with more than 1,000 signatures to city officials calling for public washrooms in O-train stations. In the original plans there were no additional washrooms beyond the provincially required ones in the terminus stations at Tunney’s Pasture and Blair.

On July 8, 2015, Ottawa City Council unanimously voted to include public washrooms at the Bayview and Hurdman stations on Line 1.

“It seems to me that the city is still listening, even though they are reluctant, and that because of our ongoing campaign, whether they admit it or not, they put in two more public toilets in Bayview station and Hurdman station,” says Kashungnao.

Kelly Ann Jobson, who has Crohn’s disease, says looking for a washroom is the first thing she does when she goes out, which has kept her largely at home during the pandemic.

“I did not actually leave my house, other than to do a grocery pick-up, until February,” says Jobson. The reason she stayed at home for 11 months was because she genuinely “wasn’t sure if there would be access to a washroom.”

The city has a map of washrooms in public buildings and parks with accompanying hours of service but the information does not appear to have been updated to reflect COVID-19 closures.

Kashungnao says the COVID-19 pandemic has shown how inadequate and dysfunctional the current system of public washrooms is.

“When everything shuts down, then people have nowhere to go,” she says. “The mapping, the plotting that we are doing, that the city is doing, becomes meaningless.

An interactive map of publicly available washrooms in the Ottawa area, created with open data from the city’s website. Hours may not be accurate. Visualization © Rebecca dePencier.

“COVID-19 protocols require additional monitoring and cleaning of high touchpoints in washrooms,” Dan Chenier, general manager of recreation, cultural and facility services, said in an email to Capital Current. “For this reason, washroom operating hours are aligned to programming at the site when staff are available to perform these functions.”

Public washrooms in some parks reopened for the May long weekend and “washrooms located in other City parks will reopen as summer programs officially start and staff are on site to occupy the buildings,” Chenier says.

But even before the pandemic, Jobson remembers being refused the washroom at a Shoppers Drug Mart when she was shopping with her daughter.

Having to rely on store washrooms and then being denied is an issue for many.

“When we rely on the private sector to deliver these services they get to decide who’s worthy of using their bathrooms,” says Laura Shantz.

Shantz, who worked in homelessness services for several years, points out that people who are street involved are often not permitted to use washrooms in private businesses, nor are young children.

Jobson recently relocated to Nova Scotia but continues to support the campaign for more accessible public washrooms from afar.

“It needs to go nationwide and it needs to be brought to the forefront because it impacts so many people and everybody uses the washroom,” she says. “Some of us just need it a little more frequently than others.”

Citizens concerned about the issue may register online to attend one of the various public sessions the city is holding to discuss feedback from June 22 – 28.

“We’re going to be participating in those and if people would like to join us, the more the merrier,” says Stephanie Taylor, another core member of GottaGo! Ottawa’s campaign team.

Ottawa residents can also add their name to the group’s letter, contact their city councillor or their local community organization, share information on social media or just talk to their friends about the issue, says the GottaGo! Ottawa core team.

“Everyone agrees on our team that it is not just a GottaGo! campaign. It is an Ottawa campaign, it’s the citizen’s of Ottawa’s campaign. And we are here together,” says Kashungnao.

There is really no end to the work the group is doing, whether public toilets end up being prioritized or not, says Taylor.

“We’re advocating hard for this year, for this New Official Plan, but the work will continue and we’ll find new and innovative advocacy strategies to try and partner with the city to improve public toilet access.”