2 days ago 0 2 min read
We use cookies to provide a personalized experience for our users. By continuing to browse this site, you give consent for cookies to be used.
Got it!
Home > News > Canada > Ontario > UPDATE: Hamilton school board votes to rename Ryerson Elementary School because of connection with residential school system founder 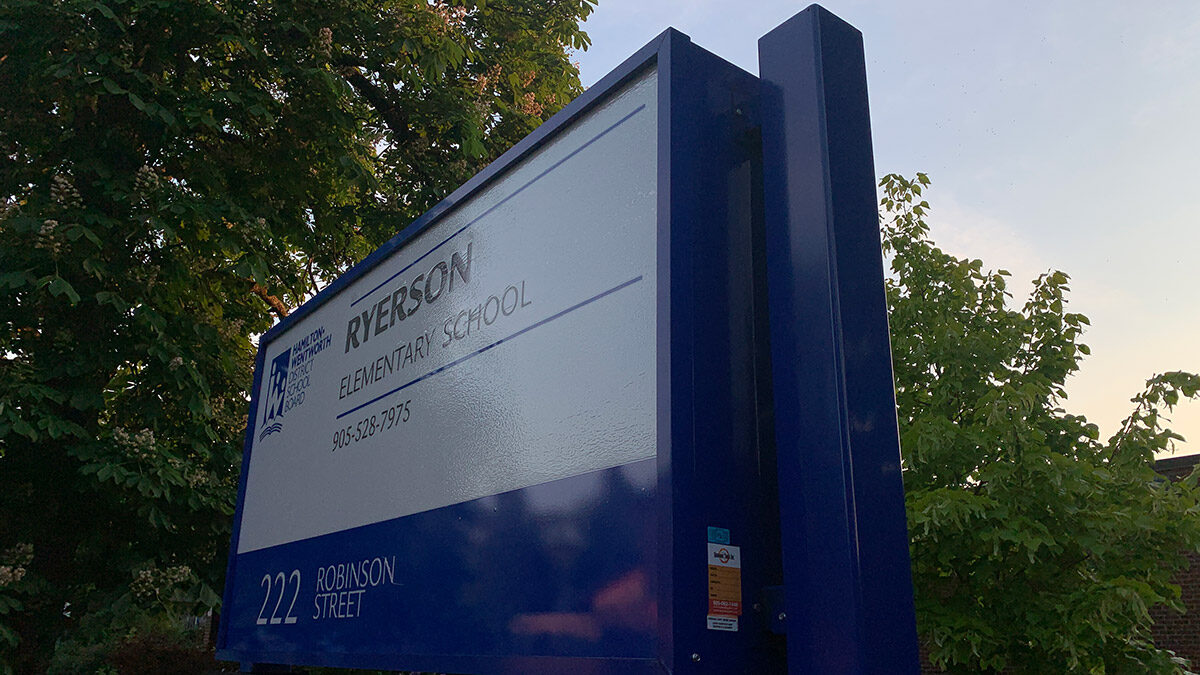 The name of Ryerson Elementary School, located in Hamilton, is the focus of Hamilton-Wentworth District School Board trustee Cam Galindo's motion, which will be discussed on Monday. [Photo © Talar Stockton].
Education

Editor’s Note: A national residential school 24-hour crisis line is available from the Indian Residential School Survivors’ Society to provide support for survivors and those affected, and can be accessed at 1-866-925-4419.

The motion to rename the school was introduced by Cam Galindo, board vice-chair and a school board trustee. The vote also included a recommendation to conduct a review of all of the city’s public schools named after individuals.

Ryerson Elementary School is one of many schools across Canada whose name is being reconsidered following the discovery of the bodies of 215 children at the former Kamloops Indian Residential School in British Columbia.

Galindo filed a motion to rename Ryerson Elementary. His motion also called for a board-wide review of schools named after individuals to ensure they reflect the board’s values and application of “human rights, decolonization, anti-racism and anti-oppression principles.”

Galindo said he felt devastated when he heard the news of the remains identified by the Tk’emlúps te Secwépemc First Nation. Shortly afterwards, he said, he became aware that Ryerson Elementary School is named for Egerton Ryerson, “who in many ways is the architect of the residential school system in Canada.” Galindo said he then proceeded to type up the motion to meet the filing deadline for the next board meeting.

“This isn’t new information,” said Galindo, who arrived in Canada as a refugee when he was seven years old. “This is stuff that Indigenous people have been discussing and advocating for, for many, many years.”

In 1847, 20 years before Confederation, the Assistant Superintendent General of Indian Affairs for Upper Canada asked Ryerson to prepare a report on the “best method of establishing and conducting Industrial Schools for the benefit of the aboriginal Indian Tribes.” Ryerson, who was at the time the superintendent of schools for Upper Canada, recommended the establishment of residential schools for Indigenous students, based on the model he had seen in Switzerland at the Hofwyl School for the Poor.

Ryerson envisioned the schools as being year-round, with students working for eight to 12 hours a day and studying for two to four hours in the summer. “During the fall and spring, classes might be cancelled altogether for two or three weeks to allow the students to work at either harvesting or planting,” said the first volume of the final report of the Truth and Reconciliation Commission of Canada. In the winter, Ryerson wrote, class time would increase and working time would concurrently decrease, and students were expected to be enrolled for four to eight years.

In 2015, the Truth and Reconciliation Commission found that the residential school system amounted to cultural genocide, as the “forcible removal of children from their racial community in order to be indoctrinated into another racial community and thereby “destroy” their original group would likewise be an act of genocide.”

Although the commission has identified more than 4,100 children who died while attending residential schools, the chair of the commission, retired senator Murray Sinclair, told CBC’s The Current on Wednesday the number is likely between 15,000 to 25,000.

Galindo says he thinks renaming the school and conducting a review of schools named after individuals is a small step. He believes there is still a long way to go in terms of truth and reconciliation.

Celeste Martinez-Alvarenga, 21 said she attended Ryerson Elementary School. She said that she doesn’t support the naming of schools after those who contributed to the residential school system. “I think it’s the very least that Canada can do, out of respect for the Indigenous communities.”

Martinez-Alvarenga said the school's name doesn’t have any significance for her, and she would fully support renaming the school. She said she thinks it would be more meaningful if the school was named after an Indigenous leader.

Galindo said the evidence of cruelty and genocide perpetuated by the residential school system has left a lasting impression on subsequent generations of Indigenous peoples. “And now, we’re seeing the tip of the iceberg,” he said.

Ryerson was a name that used to be seen as a positive influence on students, said Galindo. "Now we're realizing [it] does more harm particularly to marginalize and alienate Indigenous staff and students, and other minority groups,” said Galindo. If the board is serious about truth and reconciliation, Galindo said, they need to do more work to ensure that Indigenous staff and students feel welcome and included in their schools.

Ryerson Elementary isn't the only school facing facing controversy because of the connection with the 19th century educator.

Indigenous faculty at Ryerson University have written an open letter to the university administration calling for a name change and the removal of a statue of Ryerson on campus in downtown Toronto. On Sunday evening protesters pulled down the statue and removed its head. It will not be replaced, the university says. The school is considering its options as to remaking the university. Indigenous students have started a movement to call the school the X University in protest over Ryerson's name.

And in nearby London, ON, there is a push to rename Ryerson Public School. The school council will discuss the issue Monday.

Finally the Ontario legislature has removed a portrait and a bust of Ryerson following an Opposition request.

Petition to rename the Sir John A. Macdonald Parkway collects more than 1,000 signatures in 24 hours