5 days ago 0 3 min read
We use cookies to provide a personalized experience for our users. By continuing to browse this site, you give consent for cookies to be used.
Got it!
Home > News > Ottawa > Health Canada’s proposed ban on flavoured vapes has opponents decrying impact on former smokers 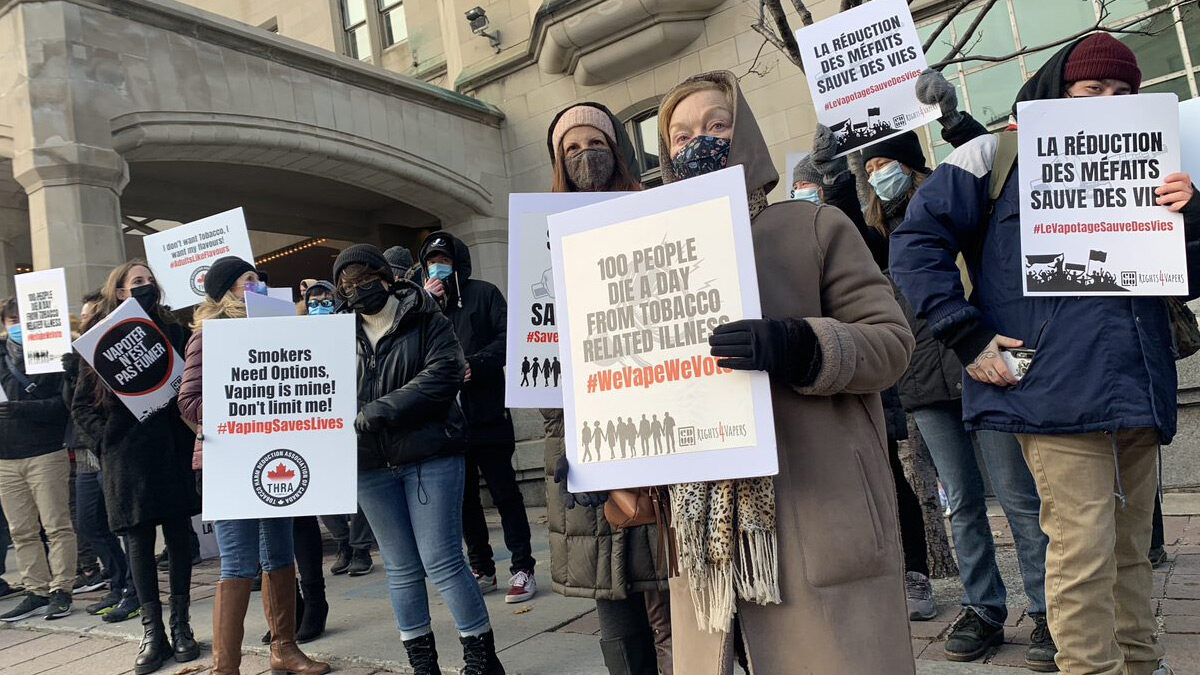 Dozens of protestors attended a rally outside the Château Laurier on Nov. 23 expressing opposition to a proposed ban on flavoured vaping. The rally took place across the street from the temporary Senate chamber at 2 Rideau St., where the speech from the throne was delivered that day. Buses were commissioned to bring vapers from Toronto and Montreal to Ottawa for the demonstration. (Photo © Alex Riehl)
Health

The smell of cotton candy and blue raspberry wafted outside the Château Laurier in late November as Canada’s 44th parliament opened its first session nearby — and no, there wasn’t a fair in town to celebrate.

Instead, dozens of vapers — enough to displace sidewalk traffic in front of the grand hotel, directly across from the temporary Senate chambers at 2 Rideau St. — were gathered to express their discontent about Health Canada’s push to ban aromatically sweet varieties of vape pods for consumer purchase.

In June 2021, Health Canada made known its intentions to regulate the sale of flavoured vape products, looking to narrow the variety of fruity and sweet vape options down to plain tobacco and mint/menthol.

The planned regulation was driven by concerns about youth uptake of flavoured products.

The public consultation period lasted 75 days, during which a parliamentary petition against the proposed regulations gained 16,370 signatures, and more than 25,000 feedback submissions were received by Health Canada.

As the public consultation period ended on Sept. 2, the ongoing federal election campaign at the time halted any progress on the potential new rules around vaping. But as the new parliament launched last month and regulations were once again on the table, Rights4Vapers — a consumer group opposed to the planned vape-flavour restrictions — held a rally to protest the Nov. 23 speech from the throne.

“The whole entire goal of Rights4Vapers is to have balanced regulations, where the needs of people who are quitting smoking through vaping products and keeping it out of the hands of minors is looked at equally when it comes to building regulations,” said Maria Papaioannoy, a Rights4Vapers spokesperson. “Currently, smokers are not even part of the discussion when it comes to the current set of regulations and the trajectory that they have taken.”

Sidebar: The Journey From Smoking to Vaping

Responses have been edited for length and clarity

“I started smoking when I was 14. That was 1986. I can tell you the feeling that that cigarette had and I was hooked from day one. Oh, it was just a sense of calm. It was more of a meditation thing for me. It was calm, I was able to focus. And then 15 years later, I started my journey of trying to quit smoking. You know, before I turned 30, I was like ‘I’m going to quit smoking.’ I didn’t get there. I used pharmaceutical approved products and I was having a lot of mental health issues. Some of the side effects are very severe, but we don’t talk about those. We don’t talk about any of that. So, I said, ‘F*** it, I’m always gonna be a smoker.’ Then, in 2010, my mother-in-law talked about this thing called E-cigarettes, and I had found a way to quit smoking. I’ve never felt better. I’ve never felt more alive. I never felt like I’ve had a bigger purpose in life than being someone that will be able to fight so every single smoker — when they make that decision, and they make that choice to stop — that this will be a viable option to them and that they can find their success the same way I did.”

“I’m 29 now. Jesus Christ, I’m old. I started smoking when I was 13. Got to the point where I was smoking about a pack and a half to two packs a day regularly. And then I noticed some, like, I guess you’d say negative health effects, like I had harder times breathing, doing cardio, things of that nature, little things here and there. Like whenever I got sick, like I got sick, easier, had worse overall symptoms. I tried a couple of different options to try quitting. I tried the gum, I tried the patch, I even tried the little inhalers when they first came out. But for me, I didn’t find any of them satisfying because at the end of the day it didn’t fully replace smoking, because it was more than just the nicotine addiction, it was partially a sort of ritual or a habit. I didn’t find anything that fixed that for me. I had a friend of mine who had started vaping, I didn’t really know much about it at the time, so they introduced me to it, pointed me in the direction of a local store here in Ottawa, went down, and I decided that I’d give it a shot. I’ve been smoke free for five years now. When I came off of smoking, I was like, ‘Oh, my God, things taste different.’ I can taste them more compared to before. When I do get a cold, I don’t have anywhere near the same severity of symptoms that I used to have before. Now the most I get is maybe like a stuffy or runny nose and like a light cough versus getting like massive throat pains, rough cough, your pains all the way going down. I don’t find myself getting winded anymore; one of the big issues I had was just going up a flight of stairs, I’d be done after two flights. Now I’m able to climb the seven floors in my apartment, and I’m all good. Those are the most notable effects I’ve noticed, aside from the obvious benefits of not having nicotine-stained hands or smell anymore.

Despite a new iteration of the Tobacco and Vaping Products Act becoming law in 2018, which prohibits the promotion of nicotine products among other regulations, Health Canada has reported that vaping among youth doubled between 2017 and 2019. Additionally, according to a 2020 survey, 14 per cent of youth aged 15-19 said they had used a vape in the past 30 days, unchanged from 2019.

But Rights4Vapers, including several demonstrators at the Nov. 23 protest, said the focus on preventing youth from using vape products is causing collateral damage among those trying to find a less harmful alternative to smoking.

“When I quit smoking, it was important to get away from smoking; I didn’t want something to remind me of cigarettes,” said Barrington Anglin, a vape user at the rally who found flavoured vapes to be an effective tool in quitting smoking. “My ultimate fear would be that people are either going to be dissuaded from vaping, or a lot of vapers are going to end up going back to smoking, which kind of defeats the purpose.”

Papaioannoy passionately agreed. She advocated for flavoured vapes to be seen as a form of harm reduction that draws smokers away from combustible cigarettes, saying every addict in the country should be respected and not minimized.

“Why are smokers treated differently than any other person that has an addiction? Why do we need to let smokers settle?” Papaioannoy said. “(It’s like saying), ‘Oh, you know what, you’ve already liked the smell of burnt tar, then you need to be able to get the burnt tar smell in a safer way.’”

Health Canada acknowledges some of these concerns but did not offer any clarification on how potential regulations will be augmented to satisfy the concerns of those observing the increase in youth vaping and recovering smokers.

“Health Canada has identified the availability of a variety of flavours as one of the factors that has contributed to the rapid rise in youth vaping, despite existing restrictions on promoting flavours,” Health Canada said in an e-mail statement. “Health Canada is also aware of the role flavours can play in helping people who smoke transition from smoking to vaping products as one alternative source of nicotine that is less harmful than cigarettes if they switch completely to vaping.”

Anglin said he doesn’t believe regulations would even matter to youth who vape, and that as long as youth have a parent, older sibling, or friend who is willing to get nicotine products for them, they will get them — and that a ban on flavours could just send kids back to cigarettes.

“I started smoking at 13. I knew full well that cigarettes taste like garbage. I still did it,” Anglin said. “It just seems like (the government) is punishing the people that have successfully quit smoking and found another viable option, rather than trying to find other measures to limit the access to people in the younger generation.”

Papaioannoy pleaded with youth that may consider vaping, as well as the parents who encourage it, to think about the consequences of their actions beyond just their own bodies, and explained how their choice could take a viable option away from lifelong smokers trying to butt out.

“Youth vapers are a reason for tobacco control to try and take down vaping,” Papaioannoy said. “I started smoking when I was a teen, too. I totally get it. But just know that when I started smoking, they didn’t take away cigarettes from anybody.”