10 hours ago 0 1 min read
We use cookies to provide a personalized experience for our users. By continuing to browse this site, you give consent for cookies to be used.
Got it!
Home > News > Development > Heron Gate tenants want more say in development of new units 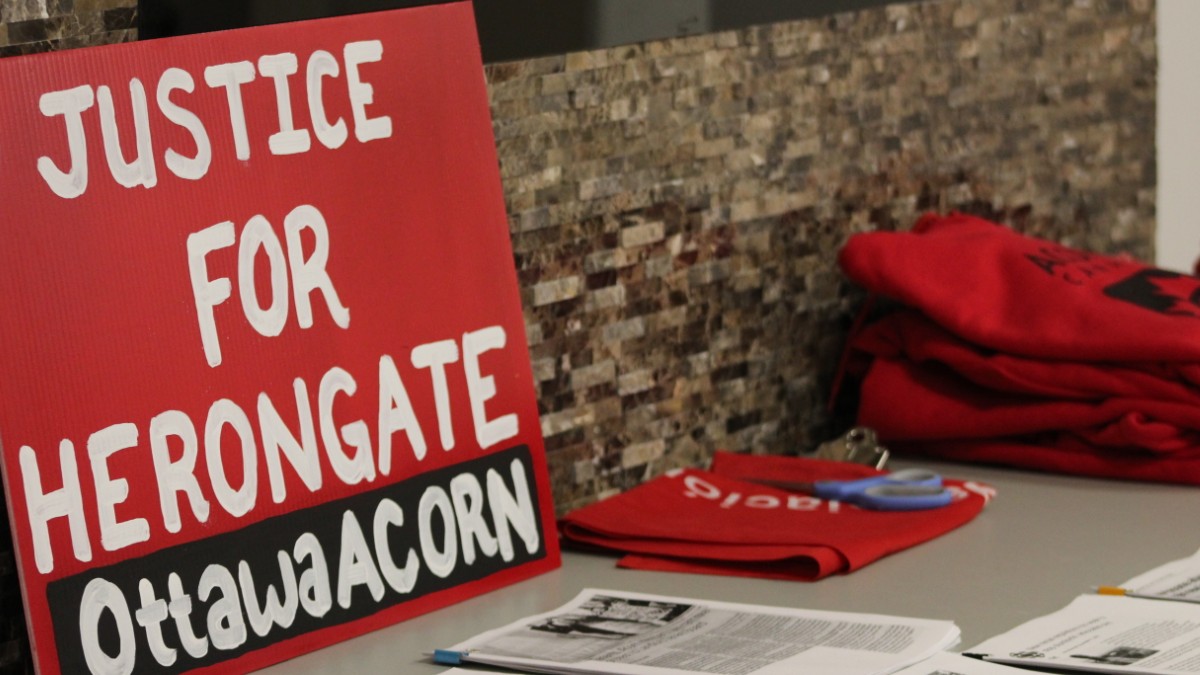 Signs from ACORN Ottawa were placed around the room with "Justice for Herongate" written on them because of the past and future evictions in the area. [Photo @ Sarah Sibley].
Community

Members of the Heron Gate community came together last night to discuss how they want their voices represented in the redevelopment of their neighbourhood.

The Association of Community Organizations for Reform Now (ACORN) Ottawa held a meeting where members and previous tenants of the Heron Gate area discussed what they want to see Timbercreek Asset Management commit to in its projects in the area.

In 2018, Timbercreek, the developer who bought the land, demolished 150 townhouses after they said the units were in such bad shape they could not be repaired.  About 400 people were evicted from their homes, according to ACORN.

Looking to create a ‘community benefits agreement,’ ACORN and residents are advocating for affordable housing, childcare options, local job hiring and rental replacements at the same affordable rate they had for units before they were demolished.

Community benefits agreements have been used across Canada, but this would be a first for Ottawa.  It would ensure more consultation between the developers and the tenants.

It would also ensure the community agrees with what Timbercreek decides to create before the development stage.

In February 2019, Timbercreek agreed to a ‘social contract,’ not a community benefit agreement, with Ottawa City Council.

This contract touches upon several concerns residents have, such as the number of affordable housing units in the new development. It also ensures current tenants in Heron Gate have new units to live in with affordable rates, before any more demolition and evictions will happen.

There is also a commitment to a combination of three- and four-bedroom units, hiring members of the local community and improving public spaces in the area.

Although the plan seems to tackle a lot, it does not have the level of community involvement and commitment ACORN wants to see.

“[The] proposal excludes community signatories, tenant participation has been limited, commitments are weak and there’s no accountability to tenants,” an ACORN spokesperson told the crowd at the meeting.

Alta Vista Coun. Jean Cloutier, said the main hurdle is navigating the social contract, as a legally binding agreement like this has never been made before in Ottawa.  Having a strong legal foundation is important to ensure the neighbourhood is protected from possible changes in the future, he added.

“Having a legal, enforceable agreement that will survive any changes in Timbercreek for the next 10, 15, 20, 25 years.  That is the biggest challenge,” said Cloutier.

Cloutier says the issues of housing affordability and housing security are two of the most difficult, but most important, elements to consider.

“It’s important to all residents of the city so that everyone who lives in our city, no matter where it is, has access to safe, clean, affordable housing,” he said.

Another point ACORN and residents want to see is a commitment made to the evicted tenants to be guaranteed a spot in the new buildings, something the social contract offers, but only if there is enough space after current tenants get a unit.

“They still haven’t learned their lesson; which is don’t kick poor people out of their homes.  That’s what they haven’t learned.  And that’s one of the reasons why we wanted to work on the CBA,” Mavis Finnamore, a leader from ACORN, said at the meeting.

On March 14, ACORN is hosting a ‘rally to defend Heron Gate,’ in front of the redevelopment site, where the previous demolitions occurred, to advocate for the switch to a CBA from the Social Contract solution.

IN THE NEWS: Thursday, March 12