3 days ago 0 4 min read
We use cookies to provide a personalized experience for our users. By continuing to browse this site, you give consent for cookies to be used.
Got it!
Home > Arts & Culture > Television > High-profile changes to voicing of non-white characters draws animated response from Black Canadians 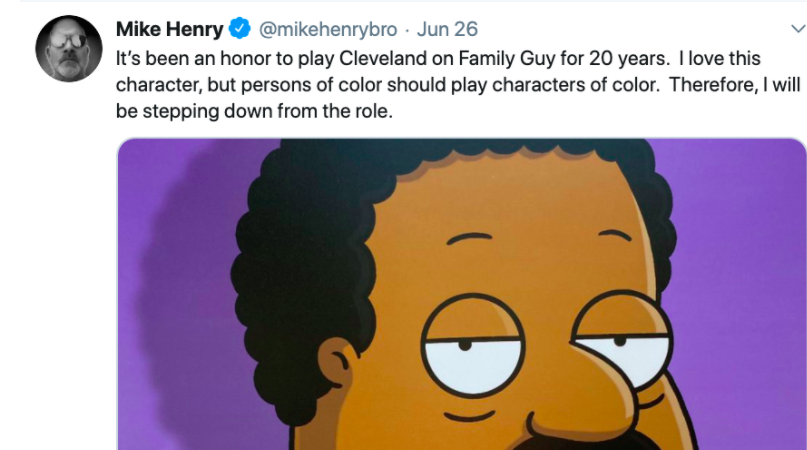 The day after The Simpsons' announced that long-running animated series would no longer voice non-white characters with white voice actors, Mike Henry — the voice of Family Guy character Cleveland Brown for 20 years — announced he was relinquishing the role. [Photo from Twitter]
Arts & Culture

The conversation around systemic racism facing the Black community has intensified in the U.S. and beyond over the past two months, and it has led to some changes — including in the animation industry.

On June 26, the creators of The Simpsons announced they will no longer use white voice actors to portray non-white characters, such as Homer’s friend Carl Carlson, Officer Lou (both voiced by Hank Azaria) and Doctor Hibbert (voiced by Harry Shearer).

“Moving forward, The Simpsons will no longer have white actors voice non-white characters,” read the statement.

Since that announcement, some white actors of other animated shows, including Kristen Bell of Central Park and Mike Henry of Family Guy, have said that they no longer feel comfortable playing their respective non-white characters.

But how do people who belong to the same ethnic group as the characters that have been portrayed by white actors feel about this ongoing issue?

Meron Behre says she is frustrated when white actors portray non-white characters because, to her, it reinforces stereotypes.

“I think that’s why when Issa Rae came onto the scene with Awkward Black Girl, it was just so refreshing because it was something different,” said Behre.

Awkward Black Girl is a web series created by and starring Rae, a Black actor, producer and writer.

Behre said that she wonders if a lot of Black people haven’t been paying much attention to The Simpsons controversy because there are so many other issues that they have to fight for. Behre is the co-founder of Ottawa-based Build Out Loud, which is an organization designed specifically to help Black women reach their entrepreneurial, business and creative dreams.

“People are out here changing the word ‘master bedroom’ to ‘primary bedroom’ and removing ‘whitelist’ and ‘blacklist’ terminology in the tech space,” said Behre. “All this problematic stuff can go, but it’s just not exactly the thing that’s killing us literally every day.”

As a Black man, Ottawa public servant LV Adderley said it’s insulting to have a voice actor play a character that represents a different race than their own. He said one of the biggest issues is how the actors change the way they talk to make their portrayal seem more “authentic.”

“In order to embody a certain ethnic character, you kind of have to adopt an accent or lingo in order to sell the role,” said Adderley. “That means you are exaggerating your speaking style to mimic someone else’s cadence and natural speaking style.”

Adderley said he and others agree that this kind of portrayal in the world of animation is comparable to appearing in blackface.

“I think they (voice actors) get away with it more because we rarely ever know the people behind the voices of these iconic cartoon characters,” said Adderley.

On the other hand, Natasha Duckworth, an Ottawa travel agent, said that, while representation is important to her, she doesn’t have a problem with voice actors portraying characters of differing races and ethnicities.

“We need to remember that actors are just that — actors,” said Duckworth. “If they are good at their craft, then yes: they can mimic or impersonate another.”

She added: “As far a voice acting goes, very good voice actors may be hired because they can play more than one character.”

“We need to remember that actors are just that — actors,” said Duckworth. “If they are good at their craft, then yes: they can mimic or impersonate another. … I would much prefer to see representation across the development process, from graphic design to producer.

Duckworth said she doesn’t take any offence if a voice actor can play any race. But there needs to be better representation across the industry, she argued.

“I would much prefer to see representation across the development process, from graphic design to producer,” said Duckworth.

Even though a lot of the attention surrounding this issue stems from the United States, some Canadian animation studios are working on a plan to give non-white roles to non-white voice actors.

Samantha, a Black woman whose last name is being withheld for reasons related to her job, works for an animation studio. Her latest assignment is helping the studio figure out how they can help the Black community gain greater representation in the industry.

While she said she’s unsure about what this initiative will look like because it’s still in its early stages of development, Samantha said that she will listen to representatives of the Black community for ideas about what they’d like to see done.

“If there are enough people who think it (seeing more Black voice actors portray Black characters) is a great change and a step forward to helping the Black community,” said Samantha, “I will gladly find a way to help implement it more in the animation industry.”

In the News: Monday, July 6