3 days ago 0 1 min read
We use cookies to provide a personalized experience for our users. By continuing to browse this site, you give consent for cookies to be used.
Got it!
Home > News > Ottawa > Honouring the fallen at the National Military Cemetery 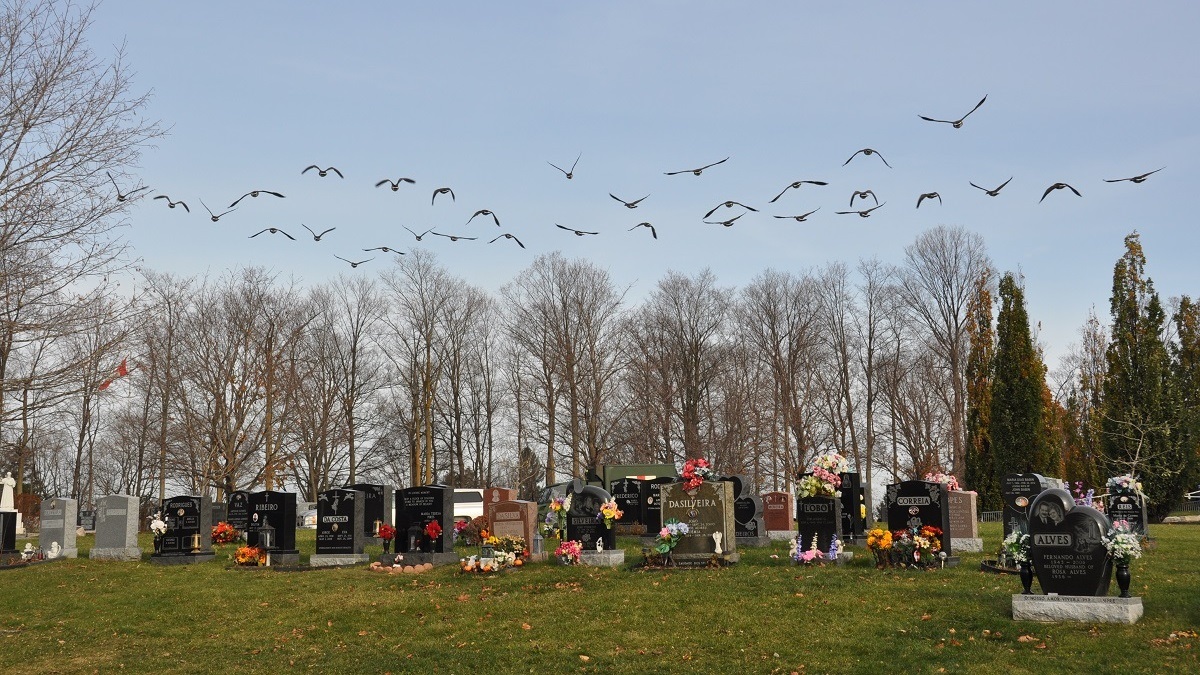 A flock of geese flies in formation over the National Military Cemetery shortly before the ceremony. [Photo © Matthew Guida]
Canada

Honouring the fallen at the National Military Cemetery

When it comes to marking Remembrance Day, the National Military Cemetery of Canada — located within Beechwood Cemetery – is one of the most sacred locations for Canada’s military community. Since 2001, an annual ceremony has been held at the cemetery to honour fallen veterans.

“A lot of the families come to the National Military Cemetery to be at that Remembrance Day Ceremony”, said André Levesque, a Lieutenant Colonel and veteran of 35 years. Levesque is also the cemetery’s first and only Chief Historian. “Immediately after the ceremony, they go and visit their loved ones.”

When the ceremony first started nearly two decades ago, Levesque said only a dozen or so people attended. Today, nearly 2,000 people attended the cemetery’s annual ceremony.

The National Military Cemetery holds the graves of veterans who fought in D-Day and the subsequent Battle of Normandy. This is the 75th anniversary year of those critical events. The cemetery also serves as the final resting place for 28 veterans of the Afghanistan mission — “the highest concentration of fallen warriors from that conflict in a Canadian cemetery,” says Levesque.

Col.Dan Clarke, 73, is a veteran of more than 37 years. He served in the Canadian Airborne Regiment and has been attending the ceremony since 2005. “This is the opportunity to think of all the soldiers, men and women that served before and that are still serving today and the price that they all paid so that we could continue to be a democratic society in Canada.”

On Monday the ceremony featured several high profile veterans and soldiers including Lt.-Gen. Wayne Eyre – the commander of the Canadian Army – as well as Jack Commerford, a 95-year-old veteran who served as a gunner for the second Heavy Anti-Aircraft Regiment and fought at the Battle of Normandy.

As time moves forward the number of veterans declines. There are no survivors from the First World War and only about 33,000 left who served in the Second World War.

“More people should remember. A lot of people don’t”, said one veteran with more than 31 years of service. “They should start remembering cause it’s their freedom that they died for including my dad” who died fighting in the Second World War in Italy.

“The world right now is polarized,” said Col. Clarke. “There are more wars going on now than there ever have been before. We just have to understand that we just can’t sit back and ignore what’s going in the world.”

For the current generation of Canadians, this ceremony — as well as the one at the National War Memorial near Parliament Hill which attracted thousands of people on Monday – is a reminder of the opportunity to recognize our veterans, as well as those brave service members that continue to fight for Canada today.

“The current generation of soldiers are working very hard to maintain the peace in the world. It’s more important that we as Canadian citizens recognize the need and not just look down our nose at what soldiers do,” says Clarke.