5 days ago 0 6 min read
We use cookies to provide a personalized experience for our users. By continuing to browse this site, you give consent for cookies to be used.
Got it!
Home > News > Ottawa > Hydropower producers failing to protect Ottawa River’s endangered eel, say environmentalists 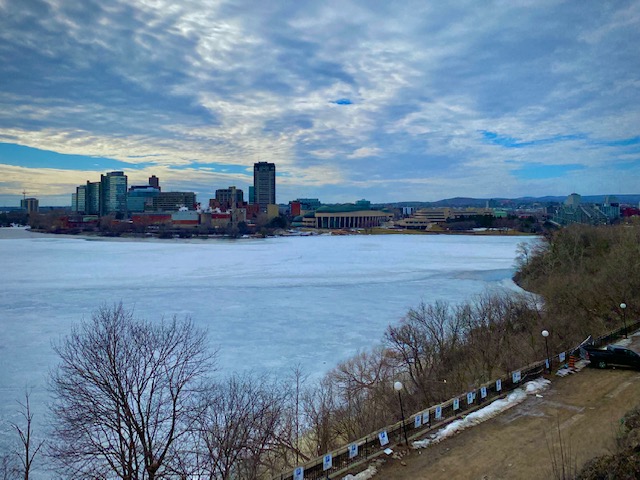 The Ottawa River, seen here in downtown Ottawa-Gatineau, is a key habitat for the American Eel. The Canadian Wildlife Federation says the population of the species has nearly been wiped out in Ontario in the past 20 years. [Photo @ Hibah Salaria]
Community

Environmentalists say Ontario hydropower producers are not living up to their legal obligations to protect the severely threatened American eel along its epic migration routes which includes the Ottawa River.

The Canadian Wildlife Federation says the American Eel population has decreased in Ontario by 99 per cent over the last few decades.

The CWF recently released the findings of an access-to-information probe carried out with Carleton University researchers that details a widespread failure to meet regulatory requirements to protect the threatened eel under Ontario’s Endangered Species Act.

The investigation, based on documents produced by a freedom-of-information request, “reveals that Ontario and hydropower producers in the province have failed to meet legal responsibilities for conserving the American Eel,” the federation said in a Feb. 23 statement.

“Despite decades-long declines at provincial, national and international scales, little progress is being made in Canada to protect the species and reduce threats to it,” Nicolas Lapointe, the CWF’s senior conservation biologist for freshwater ecosystems, said in the statement.

The snake-like American Eel lives in rivers and lakes in northeastern North America but undertakes a spawning migration covering thousands of kilometres to the Sargasso Sea, part of the Atlantic Ocean off the U.S. coast.

Laura Reinsborough, CEO of the Ottawa Riverkeeper environmental organization, said the sharp decline of the American Eel population has been observed in the Ottawa River.

“In the last forty years, that 99 per cent decline of the species has been tracked here,” she said.

Reinsborough said that the major contributing factor to the decline of the eel population are the hydroelectric dams and power stations on the Ottawa River.

“This (the Ottawa River) is amongst the farthest reaches of their migratory range, and that actually means that it is the strongest females that are making it to the Ottawa through their migration,” she said.

“It’s really important to the health of the species that those females are able to, first of all, make it to where they want to go for the full migratory range, and then return back to the sea to be able to spawn,” said Reinsborough. “That includes getting to the headwaters of the Ottawa River, but there are about 50 major dams in the Ottawa and that is a physical barrier.

“Not a very high success rate of eels are able to make it past dams. Even though many of them (dams) do have mechanisms in place to help them pass through, like an eel ladder or eel passage, the first one they would encounter in the Ottawa, the Carillon dam, does not,” she said.

Reinsborough said American Eels are an important part of the Ottawa River’s ecology. For millennia, they were a major source of food and spiritual sustenance for Indigenous people living in the Ottawa Valley. The Algonquin name of the Pimisi LRT station in downtown Ottawa honours the eel.

“Eels are really ecologically significant to Ottawa. In fact, they used to make up the largest biomass in the river for any species,” said Reinsborough.

“It’s really important to the health of the species that those females are able to, first of all, make it to where they want to go for the full migratory range, and then return back to the sea to be able to spawn. That includes getting to the headwaters of the Ottawa River, but there are about 50 major dams in the Ottawa and that is a physical barrier.”

“When eels are living in the Ottawa, they play a really important role. They’re an important predator. And though predators get a bad rep, they certainly play an important role in ensuring that everything is balanced.”

Reinsborough noted that the eels are “nocturnal, as well. So they’re usually hunting at night. When they do that, they slither along through the mud and they actually kick up the other creatures that are living in the mud, and that helps circulate nutrients.”

Reinsborough said eels also help scientists understand the health of the water system they are found in.

“They’re listed as an indicator species, meaning that the health of their population will tell us about the overall health of that habitat,” she said.

Lapointe told Capital Current that far too little progress is being made to protect the vulnerable species. He added that concerned individuals can’t do a lot to help the eel population.

“Given that the primary threat to (the) American Eel is hydropower, there is not much that individual citizens can do to directly reduce this threat,” he said.

But Lapointe said people can still raise their voices to inspire stronger action from governments and hydroelectric utilities.

“They can write to their MPPs, and the Ontario Minister of Environment, Conservation and Parks, who is responsible for protecting species at risk,” said Lapointe, “and ask that more be done to mitigate the effects of hydropower on (the) American Eel.”

“The primary conservation needs are to increase access for upstream migrating juvenile eels by installing eel ladders at hydropower facilities. This must be accompanied by actions to reduce turbine mortality for out-migrating adult eels.”

He added that hydropower facilities need to implement more strategies to protect the vulnerable species.

“The primary conservation needs are to increase access for upstream migrating juvenile eels by installing eel ladders at hydropower facilities,” said Lapointe. “This must be accompanied by actions to reduce turbine mortality for out-migrating adult eels. This could include spilling water at night, when 75 per cent of eels outmigrate, installing . . . bypass channels to prevent turbine mortality, and trapping adult eels and manually transporting them downstream around turbines.”

Reinsborough said that pushing for more eel ladders should be a priority.

There is an eel ladder at the City of Ottawa-owned hydro dam at Chaudière Falls just upstream of Parliament Hill.