3 days ago 0 5 min read
We use cookies to provide a personalized experience for our users. By continuing to browse this site, you give consent for cookies to be used.
Got it!
Home > News > Police > In wake of Sloly resignation, convoy crackdown looming; Ottawa gets new interim police chief 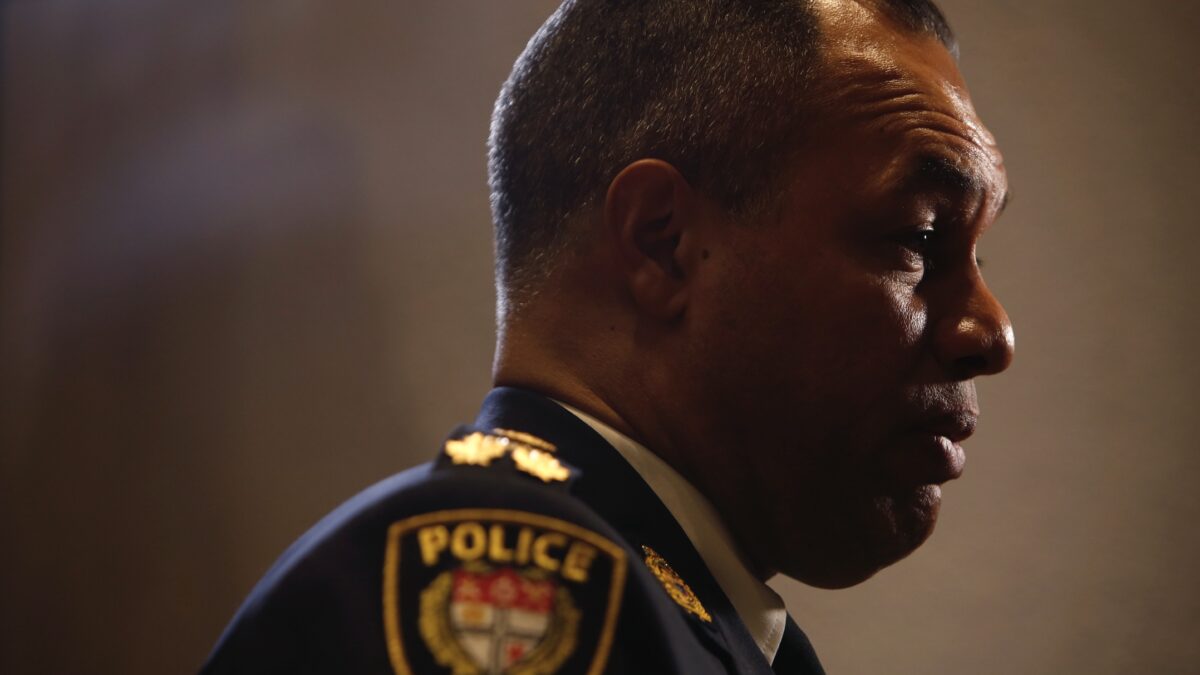 After two years as chief of the Ottawa Police Service, Peter Sloly resigned his post on Tuesday amid widespread criticism over his handling of the trucker convoy that descended on Ottawa in late January in a protest against vaccine mandates but which has occupied the heart of the city ever since. [Photo © David Kawai]
Canada

Ottawa Police issued a blunt warning to the city’s truck-blockade occupiers on Wednesday morning, a day after the federal government invoked emergency measures to tackle the crisis and the police force’s beleaguered leader, Peter Sloly, resigned as chief.

Ottawa City Council, in an emergency meeting, has announced that the former police chief of Waterloo Region has accepted the job as interim chief. Matt Torigian would be chief until the end of 2022. Torigian is a fellow at the University of Toronto’s Munk School of Global Affairs and Public Policy. He is also a former deputy minister of community safety in Ontario.

On Wednesday, the Ottawa Police Service — for now under the command of Steve Bell, a 25-year veteran and one of Sloly’s deputy chiefs — distributed a detailed alert to demonstrators that the city’s law enforcement agency was ramping up its response to the occupation of Wellington Street and other sites in the city.

“You must leave the area now. Anyone blocking streets, or assisting others in the blocking streets, are committing a criminal offence and you may be arrested. You must immediately cease further unlawful activity or you will face charges,” the police statement said.

“The people of Ottawa are being denied the lawful use, enjoyment and operation of their property and you are causing businesses to close. That is mischief under the Criminal Code,” the warning added. “Charges and/or convictions related to unlawful activity associated with the demonstration may lead to denial in crossing the USA border.”

Ottawa Mayor Jim Watson said that about 75 trucks have moved out of neighbourhood streets, many relocating to Wellington Street. The rest are staying put.

In a statement on Tuesday, Sloly said he took pride in what he had accomplished during his two years as chief, and expressed his faith that the Ottawa Police Service was now more properly equipped to tackle the convoy and put an end to the occupation in his absence.

Sloly announced his resignation after more than two weeks of harsh criticism of the police failure to thwart the so-called “Freedom Convoy” against vaccine mandates as it took over much of Ottawa’s downtown and disrupted daily life in Centretown and adjacent inner-city neighbourhoods.

“Since the onset of this demonstration, I have done everything possible to keep this city safe and put an end to this unprecedented and unforeseeable crisis . . . I am confident the Ottawa Police Service is now better positioned to end this occupation.”

— Peter Sloly, from Feb. 15 statement announcing his resignation as chief of the Ottawa Police Service

“Since the onset of this demonstration, I have done everything possible to keep this city safe and put an end to this unprecedented and unforeseeable crisis,” Sloly said.  “We have acquired new resources and enforcement tools, and stood up the new Integrated Command Centre.  I am confident the Ottawa Police Service is now better positioned to end this occupation.”

Sloly’s resignation came about a week after he made a public request for a significant increase in police and civilian resources to more effectively end the demonstration.

“We are turning up the heat in every way we possibly can within our operations and enforcement, as well as in our engagement of all three levels of government,” Sloly had said in a statement on Feb. 7.  “We are stretched to the limit, but we are 100-per-cent committed to using everything we have to end this demonstration.  We cannot do it alone.”

Over the course of the convoy crisis, Sloly has been under fire over his perceived lack of preparation and enforcement as hundreds of truckers and their supporters entrenched themselves in downtown Ottawa.

While it had been expected that the protest would play out over the course of three days, after which it was assumed the truckers would leave the nation’s capital, it is now coming up on three weeks since it began.

“Given that there were reports from all over Canada showing hundreds of trucks heading (to Ottawa) from the east, west and north, I think the whole world saw something bigger than normal unfolding . . . But somehow or another, Ottawa police decided that it wasn’t a big threat.”

Chris Lewis, a former commissioner of the Ontario Provincial Police, reacted to Sloly’s resignation by saying that there had not been enough preparation beforehand considering the vast media attention the convoy had been receiving before its arrival in Ottawa.

“Given that there were reports from all over Canada showing hundreds of trucks heading (to Ottawa) from the east, west and north, I think the whole world saw something bigger than normal unfolding,” Lewis told Capital Current.  “But somehow or another, Ottawa police decided that it wasn’t a big threat.”

According to Lewis, had police blocked off certain streets and controlled access to the city in the days ahead of the convoy reaching Ottawa, they probably would have been able to prevent the entrenchment that occurred along Wellington Street in front of the Parliament Buildings and the Prime Minister’s Office.

“Once that failed, and that didn’t happen … it became harder for (Ottawa Police) with their existing resources to get rid of (the trucks that were) there,” said Lewis. “And, in fact, (it) eventually got to the point that they needed exactly what (Sloly) was requesting from the province and feds — 1,000 or more officers to come in and help clear.”

Sloly’s “dedication to public service is well-known by the many colleagues, community groups and residents he has worked with throughout his career,” Watson said in a statement issued Tuesday.  “Unfortunately, it had become clear that many members of the Police Board, City Council and the general public were not satisfied with the response of the police in bringing the occupation to an end.”

Sloly, the first Black police chief in Ottawa’s history, said in his statement that he “took on this role with a challenge to deliver change. Together, we brought forward a renewed focus on neighbourhood policing, overhauled the Ottawa Police Service culture, and built a service that better reflects the diversity of the community we serve.”

Protecting the peat: Conservationists have bought a bit of the threatened Alfred Bog