4 days ago 0 8 min read
We use cookies to provide a personalized experience for our users. By continuing to browse this site, you give consent for cookies to be used.
Got it!
Home > News > Ottawa > Inaugural Ottawa Mystic Market offers glimpse into worlds of witchcraft and the occult 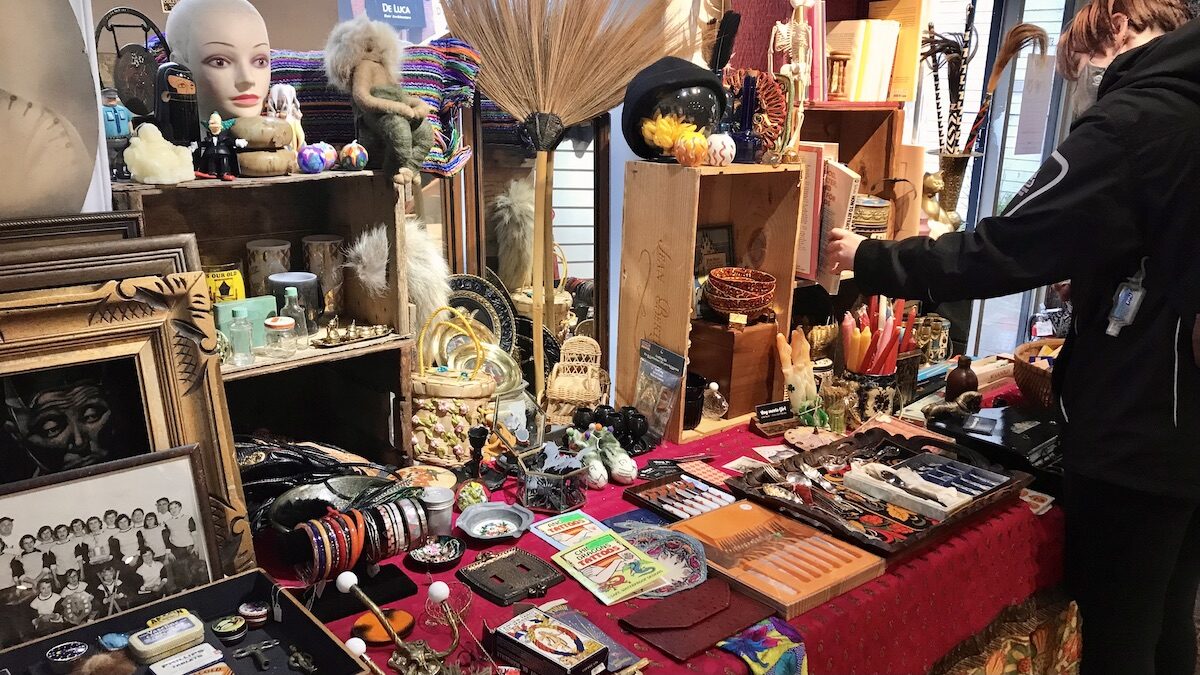 The Ottawa Mystic Market, a celebration of the occult, was held on Halloween in Westboro. The event featured vendors selling a wide variety of items, including clothing, books, crystals, tarot cards and more. Customer Sophie Portiss (pictured) said they found many items to their liking. [Photo @ Jaclyn McNeil]
Business

The first Ottawa Mystic Market took place this past Halloween in Westboro, where a lineup to enter wrapped around the corner of Richmond Road and Athlone Avenue for about six hours.

The market sold oddities, artwork and clothing from a selection of Ottawa-based businesses, many of which relate to spirituality, the occult or witchcraft. The event was organized by Vintage Pop-up 613.

Despite rain, the turnout exceeded the expectations of those selling their wares, said vendor Victoria King.

“I couldn’t believe it,” she said. “Some people said they were waiting for over an hour. It’s really humbling.”

The small business community is dependent on markets like this to stay afloat, said King: “A lot of small businesses have been sticking together and making note of markets to apply to.”

Many vendors at the Mystic Market were with businesses born during the pandemic, said King.

“I think a lot of people had extra time and people were realizing that you can’t really rely on corporations to keep you employed,” said King.

The Mystic Market was not the only witchy market to take place in Ottawa, said vendor Monica Pereira. “We did one the other day at The Koven,” said Pereira, referring to a restaurant on Murray Street in the ByWard Market.

“I do a lot of markets with Vintage Pop-up 613, so when they said they were doing a witchy one I was like, ‘Sign me up!’” said Pereira.

Mystical markets are popping up more frequently because of the recent uptick in the popularity of witchcraft, said Pereira, a self-described witch.

“I think the draw is that it’s like religion without religion,” she said. “It has really improved my mental health, it teaches you to have control over your life.”

For some vendors, this type of market was groundbreaking. Business owner Megan Mckague said this was her first time selling her products at a market, and she was thrilled to be a part of one so unique.

“I love attending the markets. I met Aida at one of the markets when she was selling spell candles. I expressed interest and that’s actually how I got involved,” said Mckague, referring to Aida Hodkinson, a chief organizer of the event and co-creator of Vintage Pop-up 613. “She was just so open, so I knew it’d be a really good community.”

“Tarot readers and psychics and that sort of business skyrocketed during the lockdown,” she said. “I think it’s partially entertainment, like there’s going to be a number of people who are spending more time on their own and really getting to know themselves.”

She added: “I think people are drawn towards it because it is an access to their subconscious.”

The event, originally planned for a different location, was moved to an indoor space the day before it was held. Still, with umbrellas clutched in their hands and soggy Halloween costumes dripping on the pavement, those attending were excited about the market, said customer Leah Cosman.

“It’s a small space, so we have to follow COVID-19 guidelines,” said Cosman, while waiting in line.

Customers were told to wear masks inside the market and a capacity limit of 60 was enforced.