6 days ago 0 5 min read
We use cookies to provide a personalized experience for our users. By continuing to browse this site, you give consent for cookies to be used.
Got it!
Home > Politics > Large gathering at Alberta legislature continues anti-racism conversation 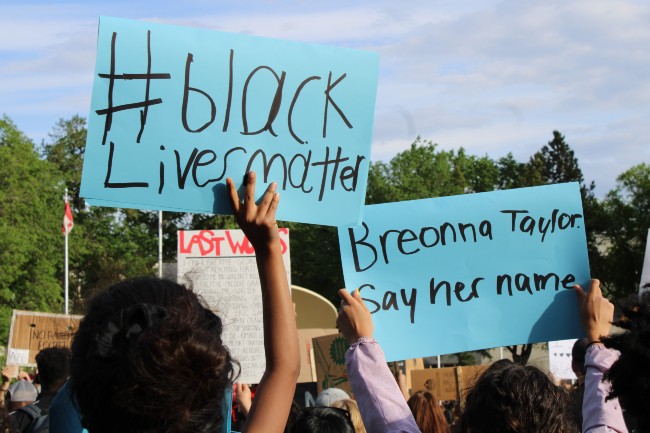 Children hold up handmade signs at the Fight for Equity rally in Edmonton, outside the Alberta legislature, on Friday. Breonna Taylor, a 26-year-old black woman from Louisville, Kentucky, was shot and killed in her apartment during a police raid on March 13. [Photo © Raylene Lung]
Alberta

EDMONTON — Up to 15,000 protestors gathered in the Alberta capital on Friday night for an anti-racism protest sparked by the death of a Black American man who died after his violent arrest by Minneapolis police.

Demonstrations condemning police brutality have been occurring across the U.S., Canada and around the world in the wake of George Floyd’s death. The Fight for Equity rally in Edmonton saw thousands — despite the ongoing COVID-19 pandemic — gather on grounds of the Alberta legislature.

Event organizers made efforts to enforce social distancing. Masks were declared mandatory, and white X’s were spray painted on the grass to encourage attendees to stand two metres apart.

The event began at 6:30 p.m. local time and was organized by Black Lives Matter YEG, a reference to Edmonton’s airport code. The protest was described by organizers as an act of solidarity against racism and inequality in the justice system, as well as a commemoration of Black lives lost from police violence.

Hundreds of colourful posters could be seen waving across the lawn in front of the legislature. The signs displayed phrases such as “I can’t breathe!” — the words Floyd could be heard repeating in a disturbing video that showed a Minneapolis police officer pressing his knee on Floyd’s neck for nearly nine minutes before the man’s death.

Other messages included “Racism is the deadliest pandemic” and “Happy 27th Birthday Breonna Taylor,” a reference to a 26-year-old Black woman from Louisville, Kentucky whose death in March during a mistaken police raid has fuelled more concern about police brutality.

A bandstand on the legislature grounds played host to several speakers during the rally, including activists, professors and ordinary citizens. A large, white banner fluttered in the breeze behind them: “All lives can’t matter until Black lives matter”.

The speeches were punctuated by chants of “No justice, no peace!” Protestors also knelt in unison and were silent for eight minutes and 46 seconds in Floyd’s memory, the length of time former Minneapolis police officer Derek Chauvin — now charged with second-degree murder — pressed his knee against Floyd’s neck.

When a stir briefly occurred in the crowd, an organizer’s voice quickly called out “No violence, only love!” and “This is a peaceful protest!”

Edmonton police monitored the streets nearby but remained clear of the legislature grounds. A helicopter circled above, the sound of its propellers often overpowering the voices below.

“Black lives matter!” wasn’t the only chant ringing through downtown Edmonton. As a transgender drag queen addressed the crowd at one point during the rally, many of those assembled began to loudly repeat: “Black trans lives matter!”

The speeches decried racism in education, as well as discrimination in the LGBTQ community and in everyday life. Several speakers encouraged victims of racism to continue to speak up, and urged all citizens to keep educating themselves and continue conversations about the issue across the country.

The rally continued onto Jasper Avenue.

Signs and sounds from Edmonton's Fight for Equity anti-racism rally