4 days ago 0 6 min read
We use cookies to provide a personalized experience for our users. By continuing to browse this site, you give consent for cookies to be used.
Got it!
Home > Business > Small Business > Little Italy’s food desert may soon end with grocery store in new development 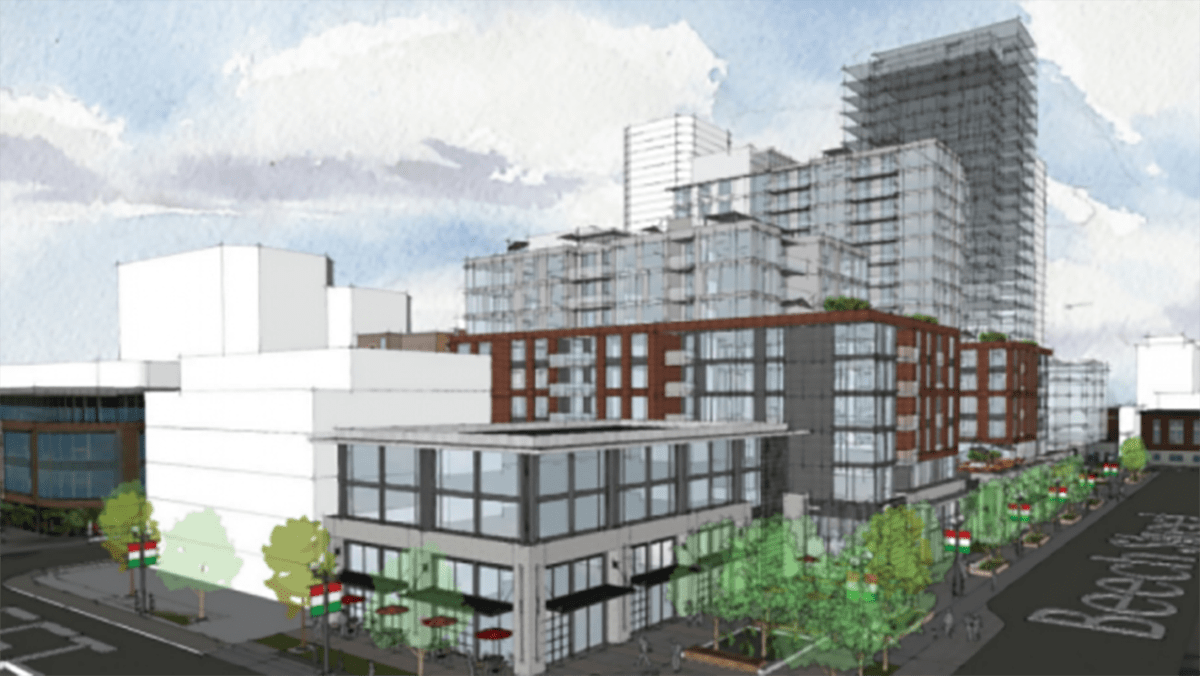 The proposed development project for Little Italy, including a grocery store. [Photo provided by Arnon]
Community

A long-awaited supermarket is expected to anchor a major new housing and retail development in Ottawa’s Little Italy neighbourhood.

The new development will see the end of what Somerset Ward Coun. Catherine McKenney calls a food desert. The supermarket is to be part of a development of a parking lot at 450 Rochester St.

The lack of a major grocery “is not due to any city regulations, but apparently the market conditions have not indicated that a grocery store would be financially viable in this area,” McKenney said in an email exchange.

McKenney has been an advocate for a full-sized grocery store in Little Italy for years.

“Functional and efficient urban neighbourhoods should provide the majority of residents’ daily needs within a convenient walking distance,” McKenney said.

The development by local corporation, Arnon, is expected to include more than 500 housing units along with the store. Phase one will include a building from 6-15 storeys which will contain 295 rental apartments as well as 346 underground parking spots. The 25,000-square-foot grocery store is in this phase.

The development would be located only a couple of hundred metres from the Carling LRT station.

The development manager for the Arnon Corp. project is Peter Hume. He said he agreed with McKenney, there has been a long term need for a supermarket and that the location close to the LRT is ideal.

“It has been a long term community desire to have a food store in proximity to the neighbourhood,” Hume said.

The long term appetite for an accessible grocery store has been felt by both residents and small business owners alike. Local restaurant owner Joe Cotroneo said he believes this construction will benefit the community, as long as it doesn’t mess with the streetscape on Preston Street.

“What they do on the perimeter doesn’t bother us, as long as it looks nice,” Cotroneo said.

He believes maintaining Preston is a key value for business owners.

“If you just start building 10-storey buildings down this street, six o’clock will become a dead zone after everyone goes home from work,” Cotroneo said.

With many residents not owning cars, it is impossible to buy groceries after 6 p.m. in Little Italy.

Cotroneo sees a large grocery outlet as an opportunity to bring more customers through their doors as well as making Little Italy a more desirable place to live.

Cotroneo sees the upcoming retail outlets as a beginning for Little Italy, as more competitors will become interested.

The Preston Street Business Improvement Association has felt the demand for more retail outlets for years. Executive Director Lori Mellor said she receives a call once a week from residents, asking when they’ll be getting a grocery store.

“It creates a community hub with these three necessary retailers because if you live in this neighbourhood you’re likely going to make that your grocery store, liquor store, drug store. They’re going to bring people here,” Mellor said.

Mellor sees the project as a necessity to gain a good balance of services and retail in the neighbourhood.

“It’s very desirable to have that mix of services,” she said.

The Arnon development will eliminate 335 parking spots used by customers and workers every day. To compensate, the local BIA negotiated a replacement of 180 public parking spots with the city.

While no retailer has been confirmed to fill the grocery outlet hole in Little Italy’s heart, Hume suggested there may be a local favourite.

“Nothing is confirmed, we’re discussing with a local retailer who came out of Cornwall and has been a staple in the Ottawa area,” Hume said.

Locals can expect the construction to begin in the Spring of 2021, with an estimated finish date of 2023, Hume said.

IN THE NEWS: Wednesday, March 25

IN THE NEWS: Tuesday, March 24