4 days ago 0 3 min read
We use cookies to provide a personalized experience for our users. By continuing to browse this site, you give consent for cookies to be used.
Got it!
Home > Community > Indigenous > Local climate group takes part in 500 km solidarity bike tour with Indigenous organization 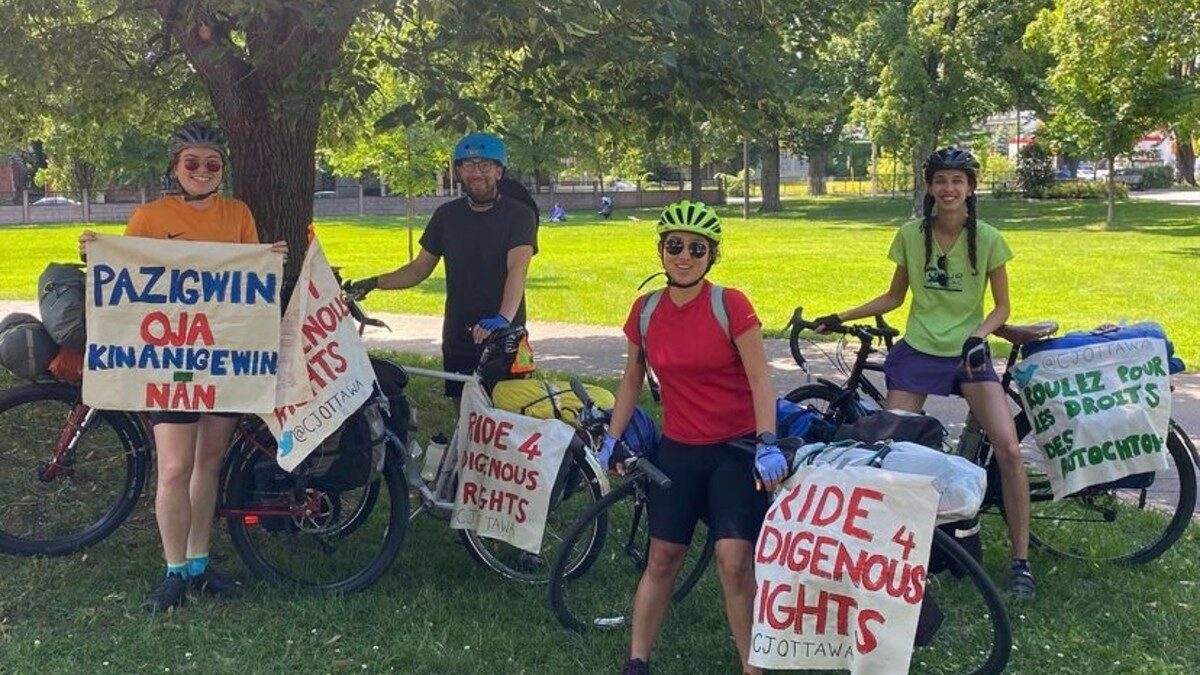 Members of Climate Justice Ottawa (CJO), a climate and environmental rights group, are taking part in a 500 kilometre bike tour in solidarity with Indigenous peoples.

The solidarity tour started on July 10 in Ottawa and will see the bikers travel to La Verendrye Wildlife Reserve in Quebec and back by July 17.

The tour aims to raise funds and awareness for the Assembly of Seven Generations, an Indigenous-owned and operated non-profit focused on serving Indigenous youth in the Ottawa region.

“Mutual aid efforts — not simply fundraising — are a small step in returning what has been stolen from these nations in so-called ‘Canada’,” reads a statement from CJO’s GoFundMe page.

Since surpassing its original fundraising goal of $5,000 by the third day of the bike tour, CJO has increased their goal to $7,500. They’ve raised more than $6,800 so far.

“I love the idea of bringing a group together and having a bit of a purpose behind it, but also getting to bike tour and be outside,” Emma Buchanan, a founding member of CJO, and one of the five participants taking part in the bike tour, said.

During the tour, Buchanan said they will ride 50 to 70 kilometres a day. At night, the participants have been staying mostly at campgrounds and spending a few nights at a motel to rest.

Having worked with the Assembly of Seven Generations in the past, Buchanan says they couldn’t think of a better organization to support.

“We’re kind of just taking a little bit of funds from this pocket of slightly more privileged people over here, and giving it to a group that really needs some support,” Buchanan said, adding that they were blown away by the response to the fundraiser.

They hope to see climate and environmental movements supporting Indigenous peoples in protecting their culture and land on a continuing basis, she said.

”We’re living on this land that was taken forcefully and violently. I want people to be thinking about that more in their day-to-day lives, that it’s not just in a crisis or a moment of emergency that we should be supporting Indigenous communities,” Buchanan said.

Mary Stuart, a member of CJO, is part of the communications team behind the bike tour. She said adding a way for people to participate in the bike tour at home and in their own way has been extremely fulfilling.

Participating from home could look like going for a bike ride, taking a picture and tagging CJO on social media, or by sharing the fundraising link.

Stuart has been participating from home by setting a goal to bike 200 kilometres. So far, she has biked 80 kilometres.

“I have a little bit more to go. I have a couple of long bike rides ahead of me in the next couple of days,” she said.

Those participating from home could also take the chance to reflect on what Indigenous rights and sovereignty mean to them, Stuart said.

“I think it’s great to pair connecting with nature and spending time outside also with reflecting on one’s responsibility to care for people, for the planet and to recognize the stolen land that we’re on and what’s needed to support Indigenous peoples,” she said.

Stuart said the community support and the amount of funds raised so far has been incredible.

“It’s been really overwhelming. We weren’t sure exactly what to expect, but it’s been quite positive,” she said.

Stuart said standalone events like the bike tour, though great, are only a starting point.

“I think it’s also great that through this, we can provide resources for people that continue to do their own learning from home,” she said.

In the coming weeks, CJO will share resources and information about the importance of settler solidarity on their website. After bike tour ends on July 17, CJO will continue to accept donations.