2 days ago 0 3 min read
We use cookies to provide a personalized experience for our users. By continuing to browse this site, you give consent for cookies to be used.
Got it!
Home > News > Science > Meet Dr. Barbara Vanderhyden Ottawa’s ovarian cancer crusader 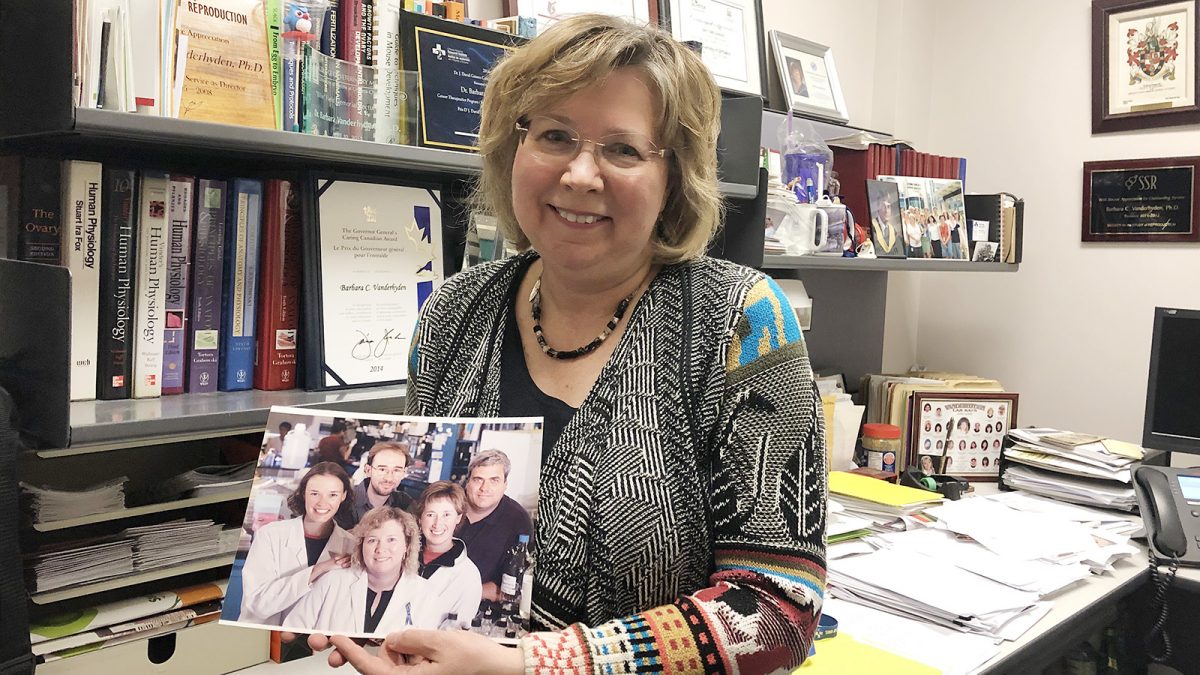 Dr. Barbara Vanderhyden is an internationally-recognized researcher in ovarian cancer. According to her, not much has been made to improve survival prospects for patients from the time she began her career in 1991, to the year 2000 when the photo she's holding was taken, to today. [Photo © Jennifer Liu]
Health

An Ottawa researcher’s work is expected to turn ovarian cancer management on its head when her ground-breaking study is published later this month.

Instead of struggling with finding effective treatment options after the disease’s onset, Dr. Barbara Vanderhyden proposes stopping ovarian cancer from appearing in the first place.

The solution lies in a relatively common prescription drug, but Vanderhyden would not reveal the name until the study is published.

“As far as I know, there is no other drug used for prevention of cancer onset,” she says. “All the pieces are there scientifically to say that it should work.”

To get to the discovery, Vanderhyden followed up on a Taiwanese study from 2015, which noted an 82 per cent reduction of ovarian cancer rates among medicated participants.

She is optimistic funding will follow once her study reaches the international cancer research community in an unnamed important journal she says publishes on innovative research on the illness. The anticipated funds would be used to consolidate trials and to determine the mechanism of the drug’s effect.

When Vanderhyden embarked on her research career nearly 30 years ago, little was known about ovarian cancer.

That’s why she chose to specialize in that field in the 1990s. In 1991 she joined an inaugural group of four researchers at the University of Ottawa before narrowing her focus on ovarian cancer in 1995. In 2000 she was appointed the Corinne Boyer Chair in ovarian cancer research at the Ottawa Hospital Research Institute. The chair is named for a woman who survived breast cancer and melanoma only to succumb to ovarian cancer.

“She was shocked at the limited number of options available to her for treatments, unlike the other cancers that she’d had,” says Vanderhyden. “We sit here 30 years later – we are not that much further ahead.”

Part of what makes ovarian cancer difficult to treat is that it tends to go undetected until it reaches the point at which cancer cells have spread. The long-term prognosis remains grim: about 45 per cent of women with ovarian cancer will live five years after their diagnosis, depending on how effective their surgery and chemotherapy regimen is.

In her study, Vanderhyden looked at human ovaries which belonged to carriers of the mutant BRCA1 and BRCA2 proteins – known as breast cancer susceptibility genes. These women are at high risk of developing breast and ovarian cancers. She noted that these ovaries were surrounded by significant inflammation, made up of dense fibres. Women on the drug, however, had non-fibrous ovaries. On top of that, Vanderhyden found that the fibres tended to develop after menopause, except in high-risk women who developed fibrous ovaries while they were still in their reproductive years.

She deduced that the fibres encourage ovarian cancer growth.

“Bing bing bing! the floodlights go on,” Vanderhyden says. “Maybe this is why women who have genetic mutations are more likely to develop ovarian cancer earlier.”

This is a significant milestone, but Vanderhyden has kept to this rhythm of work throughout her career. It hasn’t always been easy. Many times, she has had to defy the expectations of her colleagues to prove her idea.

At the start of her career, Vanderhyden worked with three men. She remembers it as a restrictive environment. She says her colleagues never took her research seriously. She said that when she joined the team she was assigned to the Institute’s social committee, presumably on the assumption that she couldn’t contribute to science as much as her male counterparts.

“I grew up in the ’60s and ’70s,” she says. “Women had all kinds of new freedoms and it didn’t occur to me that that wasn’t the case in the old boys club.

“It took me about four years to figure out that this was three musketeers, plus me,” she says. “That’s when my career took off.”

She threw herself into her research – and in bringing up the social cohesion among successive colleagues. At the same time, she developed the self-confidence to look past people who played down her potential.

“You don’t have to have ovarian cancer to get some sense of the kind of fear and hope and confusion that (patients) are feeling,” she says. “I think the thing that strikes me most about these women is they’re incredibly brave. They have a strength that I am in awe of.”

Vanderhyden’s skill and work ethic are in demand in the international research community. Her Researchgate profile lists 206 ovarian cancer research items to her credit. She has collaborated with scientists from around the world including China, Saudi Arabia and the United States.

Today, Vanderhyden is a full professor in the department of cellular and molecular medicine at the University of Ottawa. She is also a senior scientist at the Ottawa Hospital Research Institute (OHRI) in the cancer therapeutics program.

Curiosity and discovery drive her work. But what is most important to her is that everybody in her circles be a team player. Her lab has been mostly comprised of females. Whether that’s because she’s a woman or that the research subject is on a female cancer, “those two things might be intimidating enough to scare off most men but it hasn’t scared off all of them, and the ones that have come here have been absolutely brilliant.”

At the turn of the ’90s, Vanderhyden jumped at the chance to return to Canada to begin her career. She was doing post-doctoral work at The Jackson Laboratory in Maine. She recalls her life in New England at the time: during the day she would do her work in reproductive biology, on her down time she socialized with the local lobster fishing families and climbed mountains.

And yet, she felt isolated from Canada. “They spoke of nothing except what went on in the United States. And I was immediately in withdrawal within the first month of being in the States because I had no idea what was going on (in Canada).

“I’m a Canadian through and through,” Vanderhyden says. “I like the fact that we are not extreme one way or the other – that we’re middle-of-the-road, and we’re fair and we’re open.”

In Vanderhyden’s view, the biggest highlight of her career just happened. It is a $10 million commitment to ovarian cancer research included in this year’s federal budget. It will be awarded to Ovarian Cancer Canada, where Vanderhyden chairs the research committee.

“Having funds to move the ideas forward has always been the limiting factor,” Vanderhyden says. “That is the biggest thing to happen for ovarian cancer – ever.” April is Cancer Awareness Month, and the celebrations are in full bloom for ovarian cancer teams.