2 weeks ago 0 1 min read
We use cookies to provide a personalized experience for our users. By continuing to browse this site, you give consent for cookies to be used.
Got it!
Home > Sports > Museums seizing digital moment: Funding for virtual skate exhibit highlights pandemic trend 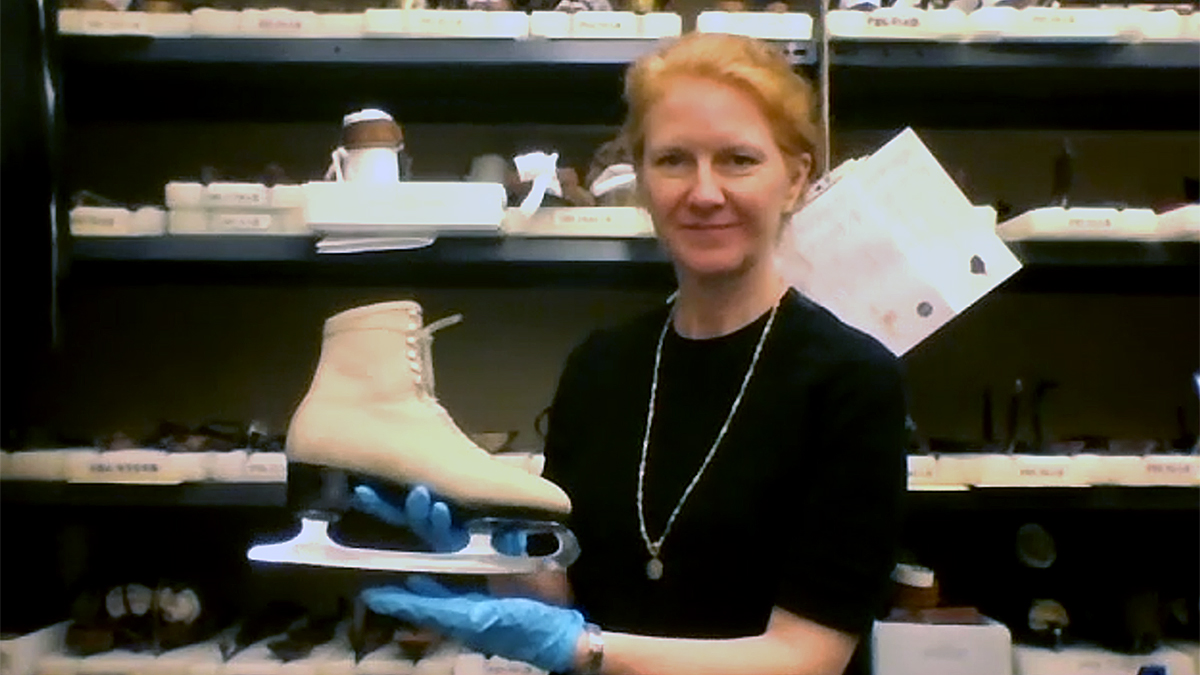 During a video interview, Bata Shoe Museum curator Suzanne Petersen holds a skate worn in the 1960s by Astra Burka, the project's creative producer. The Bata Shoe Museum will feature a wide range of skates from the 17th century to the present as they document the history of figure skating. [Photo © Hamza Ali]
Arts & Culture

A digital exhibit featuring centuries-old figure skates is among dozens of new projects being funded by the Virtual Museum of Canada at a time when the COVID-19 pandemic has heightened the importance of showcasing the country’s heritage online.

The VMC, which is part of the Canadian Museum of History, recently announced its support for 27 digital exhibits being created across the country.

The different exhibits cover a variety of topics, such as accounts of the Holocaust from the Vancouver Holocaust Education Centre and the mistreatment of Indigenous peoples in British Columbia and Alberta from the University of British Columbia’s Indian Residential School History and Dialogue Centre.

“During the COVID-19 pandemic,” the VMC said in a Sept. 9 announcement, “the digital presence of museums has grown in importance among Canadians looking for compelling online experiences, as well as for parents and educators seeking authentic and trustworthy Canadian content.”

The Bata Shoe Museum in Toronto is being supported for a virtual exhibition titled Boots & Blades: The Story of Canadian Figure Skating. The “historical footwear museum” has a collection of thousands of shoes from various cultures and time periods, but also possesses a number of vintage skates that show the evolution of recreational and competitive figure skating in Canada.

The Bata Shoe Museum is the recipient of $142,000 grant the VMC. The money will be used to develop a website and the technologies that will be used to showcase the skates and the stories behind them.

COVID-19 hit physical museums, like the Bata Shoe Museum, very hard. Bata shut down until mid-July and has since been open five days a week instead of the pre-pandemic seven.

“Now more than ever, Canadians are relying upon museums to bring stories, collections and cultural heritage into their homes and lives,” VMC director Megan Richardson said in the Sept. 9 announcement. “We are very proud that the Virtual Museum of Canada plays such an important role in placing Canadian culture front and centre in these difficult times.”

She told Capital Current that reaching Canadians through virtual exhibits is especially important right now “as people are feeling more disconnected and feeling a strong sense of isolation.”

Among the exhibits approved was the Revelstoke Museum & Archives‘ Stories Beneath the Surface. The exhibit tells the story of the flooding of a British Columbia valley in the 1960s after the construction of a dam that displaced more than 2,000 people.

“It’s a multi-layered story … that a lot of people weren’t aware about,” said Cathy English, curator of the Revelstoke Museum & Archives.

The Boots & Blades exhibit will explore the history of figure skating in Canada through the lens of the skates worn throughout time.

“It’s an opportunity for us to take things that are in our storage room and create beautiful documentation photographs of these objects,” said Suzanne Petersen, Bata’s collections manager.

Then the museum can “put them online so people can really look at them closely, zoom in on them, and read about them or listen about them and see how these artifacts fit into the context of Canadian history,” she added.

Petersen is the team leader for the Boots & Blades exhibit, working closely with Astra Burka, the creative producer. She said the decision to make the exhibit virtual arose in part from the fact that they will have no space in the museum over the next four years to mount a physical display.

Another factor in deciding to create the exhibit now instead of waiting four years was that some members on the project’s advisory board are advancing in age.

“We all as individuals become older, and there comes a point where you need to record the history, so it doesn’t disappear,” Petersen said.

To create the exhibition, the museum has partnered with Skate Canada and the Canadian Sports Hall of Fame, along with an advisory board that is stacked with legends of the sport, including 1952 Canadian silver dance medalist Joyce Hisey, four-time World champion medalist Maria Jelinek, and legendary Skate Canada announcer Wilf Langevin.

The challenge for Petersen and the Bata Shoe Museum will be providing an experience on par with a physical exhibit.

“I think it’s fair to say that the experience of the real object will never be supplanted by a digital facsimile,” said VMC’s Richardson. “There is something very powerful about being in the presence of these objects.”

But there are benefits to the exhibit being virtual, said Petersen.

One is that it becomes nationally and globally accessible, which would not be possible if the collection of skates were only displayed in the physical museum.

For English, this was a big motivation for making the Revelstoke museum’s exhibit virtual. “We wanted to reach a larger audience,” she said.

A virtual exhibit is also more accessible to people with mobility impairments or other disabilities.

The web design will be key to making the experience immersive. Award-winning Akufen Studio, a Montreal-based web design firm, will create the online project with the Bata Shoe Museum.

Richardson said she’s excited about an exhibit that will focus solely on the history of figure skating, describing it as a a unique project.

She said that the key to a good virtual exhibit is knowing what impact you want to have on your target audience and what the key takeaway should be.

Although the Bata exhibit is in the early stages of development, Petersen already has a sense of how the project will effectively communicate the story of figure skating in Canada.

“This will be about the flow, the movement, the style, and the development of the artistic and athletic sport that figure skating is,” she said.