3 days ago 0 4 min read
We use cookies to provide a personalized experience for our users. By continuing to browse this site, you give consent for cookies to be used.
Got it!
Home > Politics > Ontario votes: Ford wins strong second majority government; NDP’s Horwath and Liberal Del Duca stepping down as leaders 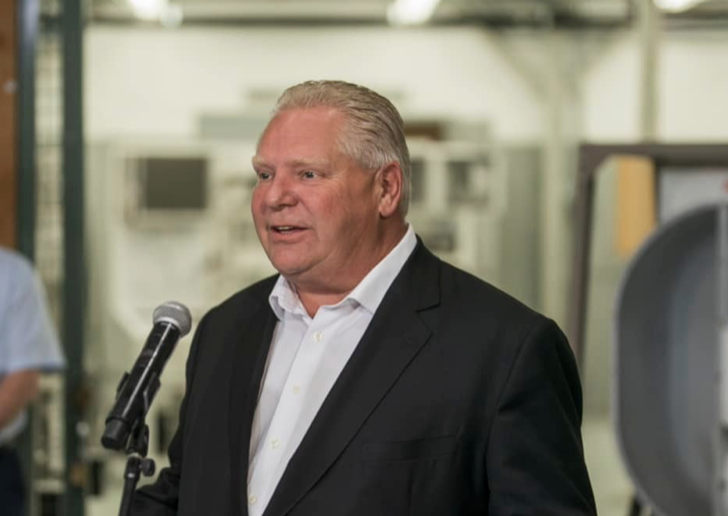 Ontarians voted in record low numbers to decide the province’s next government and after a month of disciplined campaigning, the Progressive Conservatives have won a strong second majority mandate taking 83 seats, with all ridings reported.

“Together we have done the impossible. We have made history,” a triumphant Doug Ford told an enthusiastic audience at a campaign party in his Etobicoke riding, Thursday evening.

The premier-elect made a point of thanking those working class and union voters who appear to have joined the PC coalition for “sharing in a dream of a prosperous future.” Ford then made a plea for unity to help the province in the way forward though difficult economic times.

The premier-elect will be joined in the PC caucus by his nephew Michael Ford who won in York South-Weston after serving as a Toronto city councillor.

It was a difficult night for the NDP. While they held onto Official Opposition status they did lose seats finishing with 31.

Andrea Horwath’s tenure as Ontario NDP leader is coming to an end with this defeat, her fourth in a provincial campaign.

A teary Horwath announced she would stepping aside as leader of the Ontario NDP before a crowd in her hometown in Hamilton.

She told the premier-elect “Doug Ford needs to understand that Ontarians did not vote for more cuts in things they care about.”

The night, though, was even worse for the Liberals and their leader Steven Del Duca, who lost his own race in Vaughan-Woodbridge. His future is very much in doubt. With eight seats won, his party was unable to win the 12 ridings needed for official party status in the legislature.

A somber Del Duca told a crowd in Vaughan that he was “disappointed” not to be elected in his home riding. And then he announced he too would be stepping down as leader of the Ontario Liberal party.

In the Ottawa area, the PCs held onto their suburban and rural seats with the Liberals holding the three urban ridings they won in 2018. The NDP’s Joel Harden was a convincing winner by more that 16,000 votes in Ottawa Centre.

The race in Ottawa West-Nepean, which was decided by just 175 votes in 2018, was a tight race between incumbent Jeremy Roberts for the PCs and Chandra Pasma for the NDP until late in the night. This time around, Pasma took the seat with less than 1,000 votes, becoming the first member from her party to win the riding once held by Bob Chiarelli and Jim Watson, both Liberals. Glengarry-Prescott Russell was won by PC Stephane Sarrazin after a tough fight with Liberal incumbent Amanda Simard. Simard was elected as a PC in the 2018 election but crossed the floor to join the Liberals.

There are 14 ridings in the Ottawa/ Eastern Ontario area:

The race in Ottawa West-Nepean, which was decided by just 175 votes in 2018, was a tight race between incumbent Jeremy Roberts for the PCs and Chandra Pasma for the NDP until late in the night. This time around, Pasma took the seat with less than 1,000 votes. Glengarry-Prescott Russell was won by PC Stephane Sarrazin after a tough fight with Liberal incumbent Amanda Simard. Simard was elected as a PC in the 2018 election but crossed the floor to join the Liberals.

In Ottawa South, John Fraser was re-elected. He said it was “humbling once again to be selected and supported by the people of Ottawa South.”

Fraser thanked his campaign team and volunteers to raucous applause as he pledged to work with all members of the community he represents.

“I will work hard with each and every one of you to build up our community to make sure we have the things we need here for our families,” he said.

In 2018, the PCs led by Doug Ford surged to power taking 74 seats and defeating Kathleen Wynne’s Liberals, the party that had led Canada’s largest province for 15 years. The Liberals lost official party status while the NDP, led by Andrea Horvath were the Official Opposition.

Survey data during the campaign suggested Ontario voters are concerned about issues of housing affordability and rising prices as the province emerges, slowly, from the grip of the COVID-19 pandemic.

A recent Angus Reid poll suggested none of the leadership candidates are particularly appealing to voters.

The survey, conducted in the final days of the campaign, suggests that nearly two-thirds of Ontarians found Ford unappealing. They didn’t care for NDP leader Andrea Horwath nor Liberal leader Steven Del Duca, either. Both opposition leaders held either the same or less appeal than Ford.

Ford remained top choice for best premier among Ontarians, the survey found that only 35 per cent choose him, with Horwath and “Not Sure” statistically tied for second place (21 per cent and 20 per cent respectively) on this measure.

In 2018, Elections Ontario reported an overall turnout of 56 per cent across the province. In Ottawa, turnout ranged from 51 per cent to almost 63 per cent.

Elections Ontario says that only 43 per cent of eligible voters cast ballots Thursday, the lowest ever in an Ontario election.

Earlier in the day, Elections Ontario said there were 19 ridings — or almost one sixth of the province’s 124 total — where undisclosed voting issues will force polling sites to stay open for an extra 30 minutes and up to two hours past the 9 p.m. deadline.

Reports of technical issues at some polling stations have slowed over the course of the day, but Elections Ontario remains tight-lipped about what exactly went wrong and how many people might have been impacted.

For example, Ottawa-Vanier’s returning officer, Rachelle Crete, told CBC News that several polling stations had to convert to paper ballots as a result of technical issues.

As well glitches prevented the parties from receiving the information from Elections Ontario that they rely on to get out the vote. The problem was apparently fixed this afternoon.

In Ottawa, some polling stations were moved because of the storm damage:

Elections Ontario said some polling stations in Ottawa ridings would be moving to new locations.

With files from Nicole Beswitherick