6 days ago 0 6 min read
We use cookies to provide a personalized experience for our users. By continuing to browse this site, you give consent for cookies to be used.
Got it!
Home > News > Ottawa > Ottawa Muslim family combats negativity by trying to educate neighbours 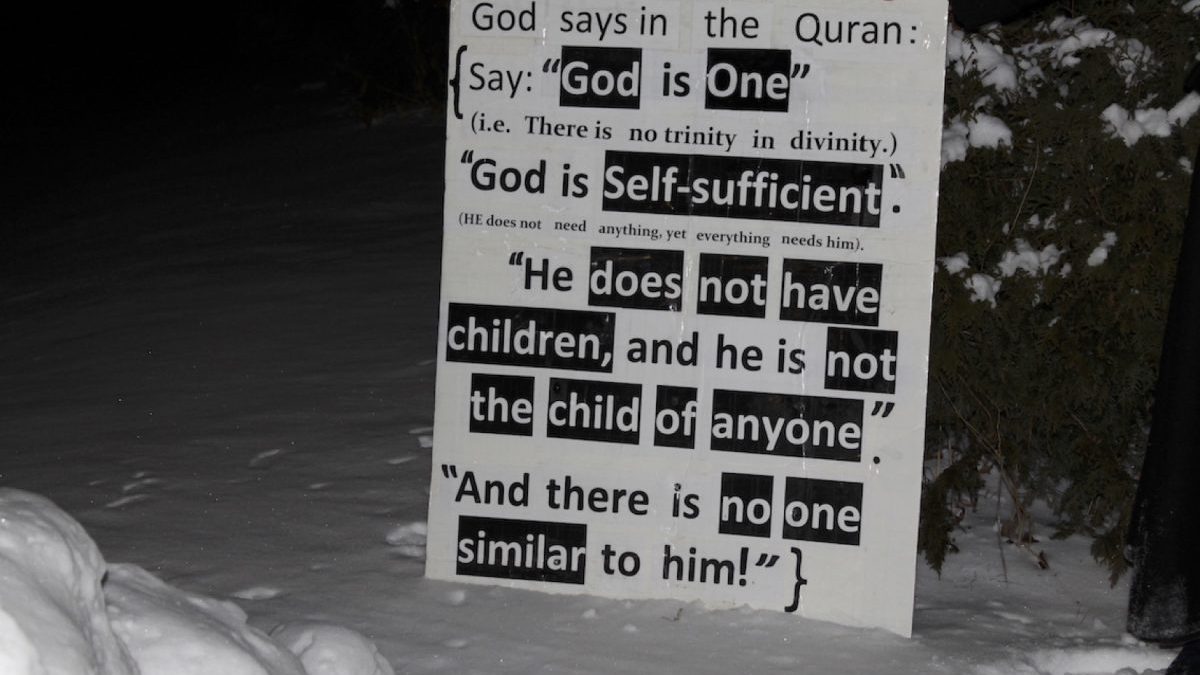 This is the sign that was put out in December during the holiday season.
Community

A devout Muslim woman in Ottawa’s south end says her family was targeted by some neighbours who threw eggs at their home, cast dirty glances and complained to the city about a religious sign with verses from the Quran that the family posted on their lawn before Christmas.

The woman responded by putting a letter in the mailboxes of dozens of her neighbours, in what she calls an attempt to explain Islam.

The woman asked not to be identified to protect her family’s privacy. The family lives in Ottawa’s River Ward. She wears a niqab, a full black veil that covers most of her face, with space for her eyes. She is a teacher and lives with her three children, her mother and her sister.

“One time, as I was walking past a neighbour and said hello, she frowned at me and seemed so upset. I thought, okay … maybe we should be fixing relationships with the neighbours,” she said. “When you don’t know something, you have fears and anxieties. I felt obligated to help my neighbours know and understand Islam.”

But the worst experience was being forced by the city to take down a sign the family had put up on their lawn after the complaints were filed.

The woman says she put the sign up around Christmas to remind her neighbours of the “monotheistic message” of Jesus and to challenge the Christian “polytheistic” message of Jesus as the son of God. The sign posted in bold, block letters, could be read as challenging some of the tenets of Christianity.

One of the verses on the family’s sign says “God is one” and in brackets beneath it says “There is no trinity in divinity.” This is in reference to the Christian trinity of God as the father, the son and the holy ghost. Another verse says God “does not have children and he is not the child of anyone.”

The woman said that most of her neighbours were respectful and friendly and she thought they would appreciate the guidance. “I did however think that some people might not like it but I had to tell them the truth, for their own good.”

Allison Sandor, the Public Information Officer for the City of Ottawa’s By-law and Regulatory Services, confirmed that the city received multiple complaints about the sign and ordered the family to take it down on Dec. 24.

“In this instance, the placement of the sign was the concern, not its content,” Sandor said in an email exchange.

Asked to provide Capital Current with details about some of the complaints, Sandor said that information could only be released through a Freedom of Information request.

River Ward councilor Riley Brockington said in an email exchange that he didn’t know anything about the incident and offered no comment. “I am not aware of the matter,” Brockington said.

The letter the woman put in neighbouring mailboxes is addressed to a “Respected neighbour” and says that hurtful acts had prompted her to try to educate the neighbourhood about Islam. The letter, accompanied by some religious pamphlets, says that the family forgives the wrongdoing, but that they hope people will continue to learn and that the community will change for the better. It is signed “Salaam (peace) upon those who follow the guidance, Your Muslim neighbours.”

The woman said she believes her niqab veil might have been the reason behind some of the negativity.

The Muslim Family Services of Ottawa and the Islam Care Centre with Somerset West Community Health Centre and the Ottawa Main Mosque have sponsored a community conversation on Islamophobia as part of a wider community anti-racism project. William Felepchuk, the executive director at Muslim Family Services of Ottawa, said in an email that several dozen Muslims attended and discussed a variety of instances of Islamophobia, ranging from assault and harassment to more common cases of comments.

“As a mental health-focused organization, we certainly see that Islamophobia, especially in the form of microaggressions, comments, and questions from coworkers, customer service representatives, neighbours, and others, can affect the self-esteem and mental health of Muslims and make them feel a sense of isolation and hopelessness,” Felepchuk said.

The woman said she was driven to hand out the letters and pamphlets by the Islamic teachings of forgiveness and being good toward one’s neighbours.

“I wish I was closer to my neighbours. It’s so important that we know who our neighbours are, so that when they need something, we are there for them,” she said.

Felepchuk underlined that “neighbourliness is one of the most sacred and central tenets of Islam.” But he also said Muslims living in Canada shouldn’t have to prove that they belong, “or to show they are not some kind of threat. Muslims are not a threat. Muslims belong in Canada as equally as any other faith community.”

One of the family’s neighbours said she appreciated getting the information in her mailbox about Islam.

“They’re just trying to bring awareness to everyone. It won’t work for everyone, but it’ll definitely work for some people,” said Liane Moskal, who received a letter.

For her part, the Muslim woman who was the target of the complaints said she understands the fear of the unknown.