3 days ago 0 4 min read
We use cookies to provide a personalized experience for our users. By continuing to browse this site, you give consent for cookies to be used.
Got it!
Home > Politics > Ottawa Police chief asks for an additional 1,800 police and civilian staff to manage convoy 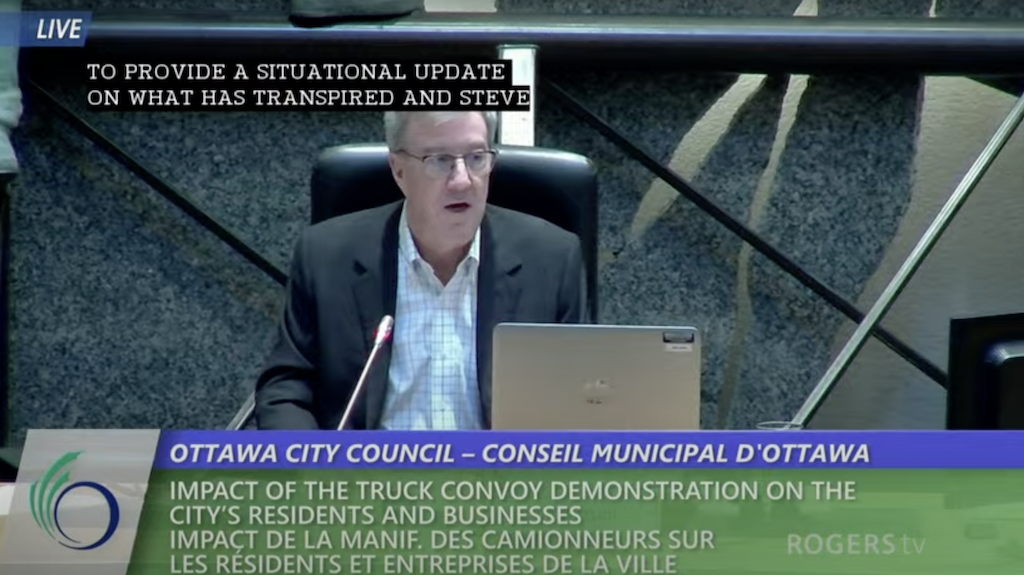 After 11 difficult days of the “Freedom Convoy” protest, Ottawa Police Chief Peter Sloly told an emergency meeting of Ottawa City Council that he needs another 1,800 police and civilians to support efforts to contain and end the demonstration.

The chief’s admission that the force cannot manage the protest with its current complement and needs additional resources supplied by other levels of government was one of the many issues discussed by council. When asked, Sloly could not say when the added resources would arrive.

He also said that officers were surrounded by protesters when they tried to arrest a person bringing fuel to the trucks parked on Wellington Street.

“The size and number of trucks and demonstrators has been significantly reduced,” he said.

Residents were also enjoying an evening without the blaring of truck horns following the issuing of an injunction again the noise by Superior Court Justice Hugh McLean Monday morning. The injunction is effective immediately will last for the next 10 days. It covers the area north of the Queensway, where most of the 400 or so trucks are parked.

Over the past weekend police services have intercepted fuel and resource supply to demonstrators, including a large seizure of fuel from the convoy’s supply depot located in the parking lot of the city’s baseball stadium.

“We are doing everything we can possibly do to end this demonstration safely, lawfully and quickly,” Chief Sloly stated.

The city has also asked the province to allow for an increase in the fines for protestors violating noise bylaws, idling vehicles and blocking roads to $1,000.

Wendy Stephenson, the city’s treasurer told council that the demonstrations were costing the city about $2.2 million a day.

Rideau-Rockcliffe Coun. Rawlson King urged councillors to condemn the racism and discrimination being experienced by marginalized communities during the “Freedom Convoy”.

“The display of Confederate flags, Nazi yellow Stars of David and swastikas during the illegal occupation of the city of Ottawa is traumatizing to members of vulnerable communities,” he said.

Somerset Coun. Catherine McKenney told council that they spent Saturday in the Kent Street area. McKenney said they felt more unsafe walking home through their neighbourhood than in the heart of the convoy on Wellington Street.

“I can tell you it’s not safer out there, only a man would say that today”, McKenney stated. “I am more worried for my residents today than I was last Monday. We are begging you, this country, this province, this city, to come together to defend one residential neighborhood. Just one.”

Deputy Police Chief Steve Bell confirmed active investigations are underway, adding that such displays have no place in Ottawa’s community.

“We cannot have a productive conversation at the business end of a gun, or at the grill of a semi,” Luloff stated.

Ottawa Mayor Jim Watson said that the past 11 days in Ottawa have been extremely disturbing.

He urged the demonstrators to leave.

“Please allow the residents who have been so deeply and negatively affected to get their lives back.”

On Parliament Hill, Monday night MPs held an emergency debate on the convoy with the prime minister back in the House after recovering from a bout of COVID-19.

Justin Trudeau showed he was not interested in negotiating with the convey.

“It has to stop,” Trudeau said. “Everyone’s tired of COVID, but these protests are not the way to get through it.” He also said his government will “be there” to meet the requests for assistance.