2 days ago 0 4 min read
We use cookies to provide a personalized experience for our users. By continuing to browse this site, you give consent for cookies to be used.
Got it!
Home > News > Ottawa > Ottawa Riverkeeper in talks with NCC for new home in historic boathouse 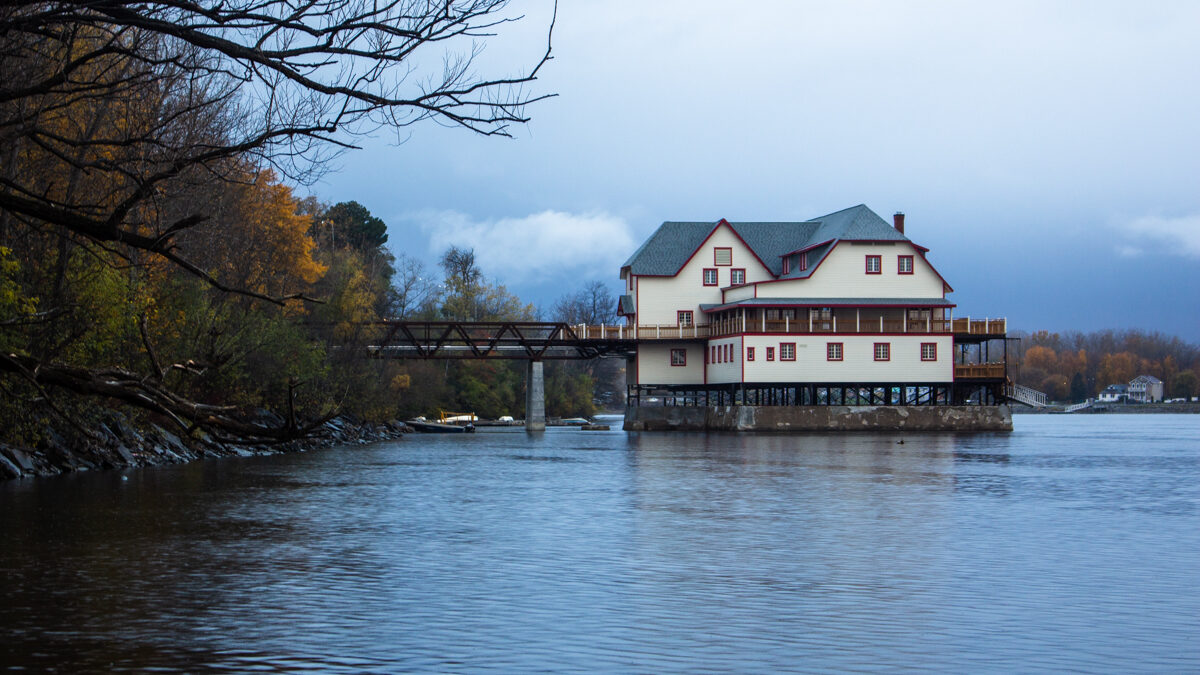 Revitalization of the NCC River House, seen here from a shoreline spot just east of the historic boathouse on the Ottawa River, is expected to finish next year. [Photo © Phalen Tynes-Macdonald]
Community

The Ottawa River’s main environmental advocacy group is in talks with the National Capital Commission to move its headquarters to a historic boathouse just off the river’s south shore in Rockcliffe Park.

As a major revitalization of the historic NCC River House nears its scheduled completion in 2022, discussions between the federal agency and the Ottawa Riverkeeper as a potential new tenant of the boathouse continue.

A new home on the Ottawa River would support the environmental organization’s growth and the expansion of its research and programming, said Laura Reinsborough, the group’s new Riverkeeper and CEO.

“The Ottawa Riverkeeper should really have its home on the Ottawa River,” she told Capital Current. “It just makes so much sense as that voice for the river.”

The Riverkeeper’s board announced on Oct. 5 that Reinsborough — founder of the Toronto urban orchard group Not Far From The Tree, and more recently director of Food For All New Brunswick — had been chosen to lead the organization.

“We are living in a particular moment in human history where environmental issues need to be heard loud and clear,” Reinsborough said in the Oct. 5 announcement. “We are collectively waking up to listen to these issues, to hear what the river and the watershed can tell us. I am thrilled to become Riverkeeper at this crucial time.”

The Riverkeeper’s offices are in Centretown with no space set aside for its educational programs. Having a larger facility with a dedicated lab space would allow the group to “connect the dots between monitoring (river health), public education, and advocacy work,” said Reinsborough.

According to the NCC, the boathouse was the site of many historic Canadian regattas and other water-sport competitions over its 110-year history.

Since then, ONEC has operated out of shipping containers on the shoreline of the river about 300 metres east of the boathouse.

“We’ve been able to continue all of our sports operations, but it’s definitely been an adjustment going from the space and security of the boathouse to really downsizing quite significantly,” said Hanlon. “We’re really excited to get back in there as soon as its done.”

She said club members especially miss spending time together in the boathouse, adding that regular social events in the ballroom, veranda and outdoor spaces are a big part of ONEC’s history.

“The bulk of the rehabilitation has now been complete,” said Sonier, who expects the project to be completed by fall 2022 after experiencing some delays resulting from the COVID-19 pandemic.

Since the boathouse was built, ONEC has been its only tenant. But when the boathouse reopens, there’s expected to be three occupants of the building.

“(The Ottawa Riverkeeper) has expressed interest in being a tenant of the building and I think it’s a great fit for the NCC,” said Sonier. “We have a lot of similar mandates and interests.”

Sonier said discussions between the NCC, the Ottawa Riverkeeper, ONEC and a food and beverage company have yet to be finalized. But he said he’s optimistic they’ll be wrapped up within the next six months.

“There would be so much more that we could do if we had our own facility,” said Reinsborough, describing the growing excitement within the Riverkeeper organization as the idea continues to be explored.

Sharing the boathouse would be a first for ONEC, something Hanlon says will be a challenge to get used to but will also open the door to many positive opportunities.

“We couldn’t have asked for a better co-tenant,” she said of the Riverkeeper organization. “There’s a lot of really good opportunities for partnerships between our two organizations, given that they are the primary caretakers of the river, and we use the river as part of our programming.”

Hanlon said ONEC has been working closely with the Ottawa Riverkeeper in recent years on their visions for the space if a lease agreement is made.