5 days ago 0 2 min read
We use cookies to provide a personalized experience for our users. By continuing to browse this site, you give consent for cookies to be used.
Got it!
Home > News > Science > Ottawa woman claims relief from Lyme with bee venom 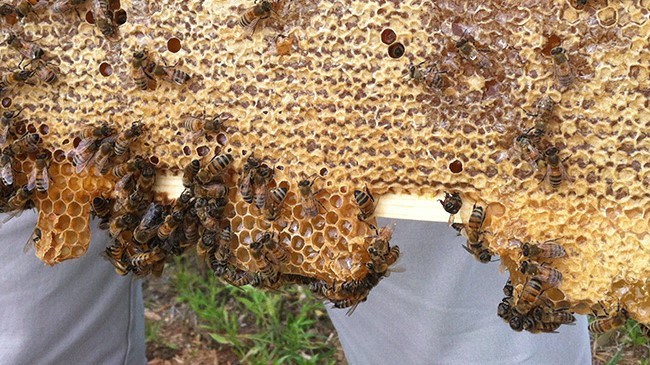 Catherine Young, who administers bee venom as a treatment for Lyme disease, says bees used for medical reasons are raised the same way they would be for honey or any other purpose. [Photo © Catherine Young]
Environment

The Ottawa woman started getting symptoms in middle school. She got sicker and sicker until she was finally diagnosed with Lyme disease at age 20. By then, conventional treatment was too late.

The woman, now 25, has tried various treatment options. She took multiple doses of antibiotics and tried different naturopathic remedies for about three years while her symptoms developed to the point where she was bedridden.

“It really is almost like a death sentence,” she said. But now, almost two years later, the woman says she feels more like herself.

The woman, who has asked not to be identified, credits this change in health to bee venom therapy. BVT is a process that uses controlled bee stings from live bees to treat autoimmune disorders and various other illnesses, including Lyme disease.

Catherine Young is a registered nurse who works out of her home in Waterloo, Ont. to administer BVT. She started administering the therapy to her husband, who used it as a method to manage his arthritis.

But dealing with Lyme disease is different, she said. “We can’t reliably test for it, and then even if you can, we’re not very confident in being able to reliably treat for it.”

Doctors typically treat Lyme disease with antibiotics. However, this only works if the treatment is administered within six to eight weeks of being infected.

“Certainly, a lot of people who get to bee venom therapy, it’s because they’ve been on a journey and modern medicine — traditional medicine if you’ll say — they’re not finding satisfactory,” said Young.

According to Young, BVT treats Lyme disease by attacking and killing the bacteria. Lyme bacteria is bordered by a thick film that cannot be broken with any known modern medicine. The bee venom, delivered by stinging bees placed in a line down the middle of a patient’s back, is able to break this film and kill the bacteria, she says.

BVT as a treatment for Lyme disease was discovered by Ellie Lobel. According to Lobel, she was sick with terminal Lyme and decided to move to California to die in 2011.

While out for a walk, Lobel was attacked by a swarm of bees. Certain she was going to die, Lobel lay in bed for days feeling the worst she ever has. But after she recovered, she said she felt a relief from the symptoms of Lyme, as well.

“I had nothing to lose so I went with it,” said Lobel. “(I) spent hundreds of hours researching and using myself as a guinea pig for this, so it’s tough to just say, how did you feel, well like death.

Lobel went on to write the protocol for the treatment of Lyme disease with BVT, which suggests two to three years of treatment. According to Young, this is to rule out other extraneous factors.

The Ottawa woman said she will take treatment for at least three years before trying to stop.

“Ultimately, I think there are so many health benefits to it that I might continue,” she said.

Her concern is that there are not many places that supply bees for this therapy. Currently, she has the bees shipped to her in batches of 300 insects per month. According to her, each batch of bees lives about one to two months.

Since there are so many bees needed for the process, the woman was desperate to find a bee supplier in Ottawa.

That was until she found Anne Ladouceur, a beekeeper at Maple Hill Urban Farm in Kanata.

Ladouceur does not specialize in BVT or its administration. However, she does supply the bees to the woman for her treatment at home.

“I’m finally having some kind of life,” said the Ottawa woman.

She is now back at school part-time and aspires to return full-time.

While BVT has helped patients like her, there is very little solid science to back the therapy.

“I’m very cautious that I’m never promising that this is going to cure everything,” said Young.

Dr. Gard Otis, a professor at the University of Guelph, has taught about the process of BVT.

“So many of the people involved with it, I would call them pseudoscientists. It’s hard to just sort out the real science from the non-science,” he said.

BVT has been used to treat various other illnesses, as well, such as rheumatoid arthritis and Multiple Sclerosis, but its benefits aren’t very well known in Canada.

The treatment is commonplace in some countries.

“When you walk down the street in China, you can walk into a medical place that does bee venom therapy,” said Young.

Very few BVT services are offered in Canada, particularly for Lyme disease. But people like Young and the Ottawa woman are working to try to change that.

“Modern medicine isn’t offering them any other hope,” said Young.

While cautious about research based on anecdotes, Young said: “To me, what I’ve seen is sufficient enough for me to keep offering it.”