3 days ago 0 177 min read
We use cookies to provide a personalized experience for our users. By continuing to browse this site, you give consent for cookies to be used.
Got it!
Home > News > Development > Ottawa’s ‘intensification’ plan gets mixed reviews in Hintonburg and Mechanicsville 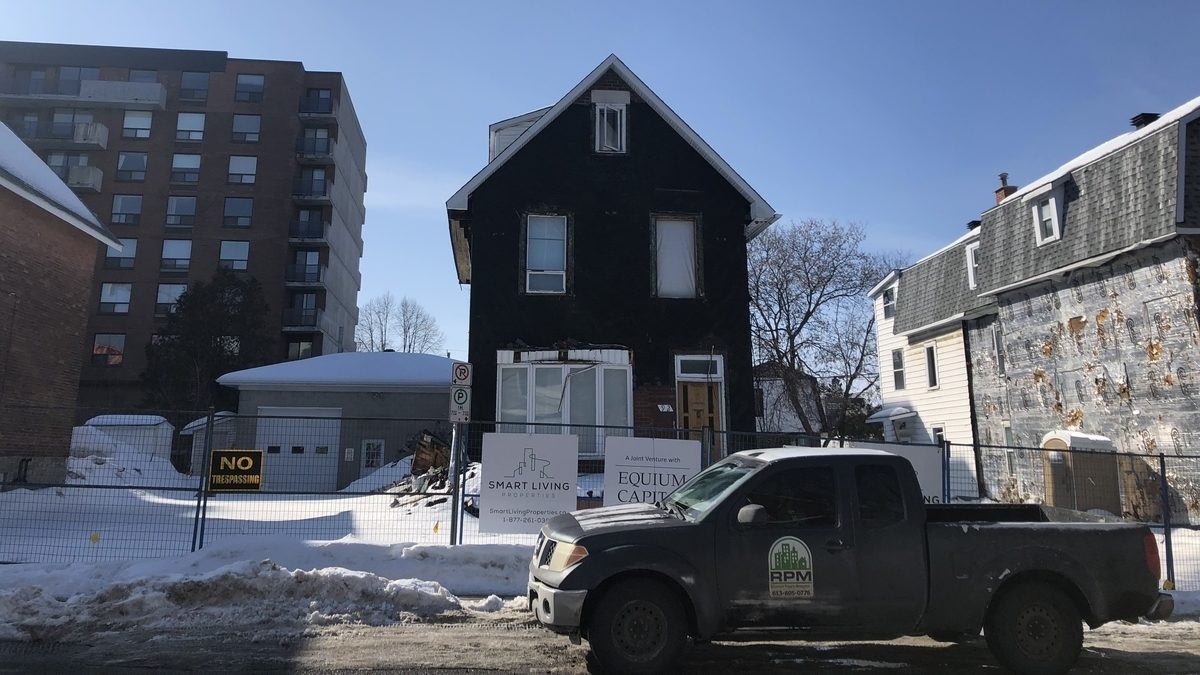 These properties on Hinton Avenue are slated to be developed into six-storey apartment buildings. [Photo © Emma Rektor]
Development

Ottawa’s ‘intensification’ plan gets mixed reviews in Hintonburg and Mechanicsville

Residents of Hintonburg and Mechanicsville appear divided after the city proposed amending zoning by-laws to increase the population density in the area and help address Ottawa’s affordable housing crisis.

People packed into the Hintonburg Community Centre last month to learn more about the proposed changes. Following a presentation from Tim Moerman, senior planner for the City of Ottawa’s zoning unit, residents aired their concerns and frustrations.

Much of the discussion centered around how the proposed changes would alter the character of the neighbourhood, as well as how affordable any new housing units would actually be.

Some became emotional, describing what they feared the changes would mean when put into practice. Others expressed alarm that the revisions would allow cramped, “chicken crate” units, or that they would cause residents to live in a permanent construction zone.

The city is looking to change R4 zoning, what the city calls ‘Residential Fourth Density Zone.’ The neighbourhoods affected include most of New Edinburgh, Sandy Hill, Lowertown, Vanier, Centretown, Chinatown, Hintonburg and Mechanicsville, as well as parts of Old Ottawa East, Overbrook and Westboro. The proposed changes include allowing the construction of buildings with eight to 12 units on lots that are restricted to three to four units now.

Moerman says the amendment will smooth the way for more affordable housing.

“A lot of the zoning is very old … and we found that it actually prevents people from building what the city actually intended to do, which is to get more multi-unit housing in those parts of town,” he said.

On Jan. 29, city council unanimously declared a housing and homelessness emergency because of the lack of affordable and accessible housing in Ottawa.

The declaration and reaching a population milestone of one million residents has sharpened the focus on bylaws created when there were far fewer residents in the city.

The city says Ottawa’s inner-urban neighbourhoods face low rental vacancy rates, with the rent on vacant units rising by 12 to 17 per cent. This means finding a rental is difficult, and when one becomes available, the rent has increased dramatically.

By 2046 the city is expected to grow by 40 per cent, says Kitchissippi Ward Coun. Jeff Leiper. To prevent urban sprawl, the city must become denser, which means the city needs more housing options, with areas near transit identified as the logical choice.

According to the city, the R4 Zoning Review will explore changes that will target a gap in Ottawa housing — the “missing middle,” which refers to walk-up apartment buildings and stacked townhouses.  (The ‘middle’ refers to housing in between lower-density options and high rises.) With the proposed plan, eight units would be allowed on a 10-metre-wide lot, and up to 12 units on a 15-metre-wide lot.

The plan has already passed phase one, and is now in the second phase. Moerman said that although some units will be “compact” (about 525 square feet, according to some draft designs presented at the meeting), they will help remedy the dearth of affordable options.

The city has no say in whether the units will be made to rent or own, but Moerman says the economics of the way the units are constructed, means it is likely landlords will choose to rent them.

Specifically, Moerman says the high cost of land, plus the more affordable wood frame (versus steel) used for smaller apartment buildings, would make the buildings too expensive for single families but attractive as multi-unit rentals. Furthermore, surface parking would not be permitted on lots that are less than 15 metres wide.

In Mechanicsville, the proposed units would be built on Forward Avenue, Hinchey Avenue, Carruthers Street and Stonehurst Avenue if the amendment is passed, according to a post made by the Mechanicsville Community Association.

Emotions were high last month when the Hintonburg Community Association hosted members of the community to get feedback on the proposed changes.

The room was packed with people, some of whom stood for the entire meeting to be heard. Participants were almost evenly divided about the proposals.

Leiper says that he is unsure about where he stands on the proposals. He said more consultation is needed before moving forward.

“I’m open to the kind of density increase that they’re talking about, as long as we know that that’s going to be sustainable from an infrastructure point of view,” he said.

Local resident Amy Volume says the neighbourhood needs to start considering the future, and additional units are necessary to ensure people aren’t further displaced and are able find a place to live.

“I am excited to see intensification,” Volume said.

However, she shares a concern that many residents had about what, if any, facilities would accompany these changes to address the increase in people coming into the area. The main concerns voiced by residents were about parks, road infrastructure and recreation facilities such as skating rinks and swimming pools.

“If we’re going to bring more people in, we’ve got to up the game when it comes to these services and not have them suffer or get crushed under the weight of all these new residents,” she said.

The city has proposed closing Hintonburg’s local recreation centre, Tom Brown Arena. This worries Volume, who says she would not have a place to go skating with her children.

Locals are also worried about the aesthetics of the area and the lack of green space and parking that this plan has the potential to bring with it.

Karen Large, a resident of Hintonburg, believes that the plan left out a lot of details of how privacy and sustainability will be ensured, and that the city should work more with the community to find alternative solutions instead of using a one-size-fits-all solution.

Large also says that developers and landlords should have concrete plans before they are allowed to kick people out of their homes. In her neighbourhood, she says she sees a lot of units that seem to be under construction for a long period of time.

“The real affordable housing problem is the developers buying up properties and kicking everybody out and then taking years to build something,” she said.

She also says these changes aren’t about affordability, as Hintonburg has a lot of semi-affordable housing offered in the area, and she believes it is odd for the city to be starting these changes in an already full area.

“There’s no respect for the scale of the existing community,” said Large.

The earliest Moerman expects developers to be able to break ground and start building would be the end of 2020, providing the plan is passed by council without any appeals.

IN THE NEWS: Thursday, March 19