10 hours ago 0 1 min read
We use cookies to provide a personalized experience for our users. By continuing to browse this site, you give consent for cookies to be used.
Got it!
Home > News > Ottawa > Outside the box: New community fridge aims to feed those in need 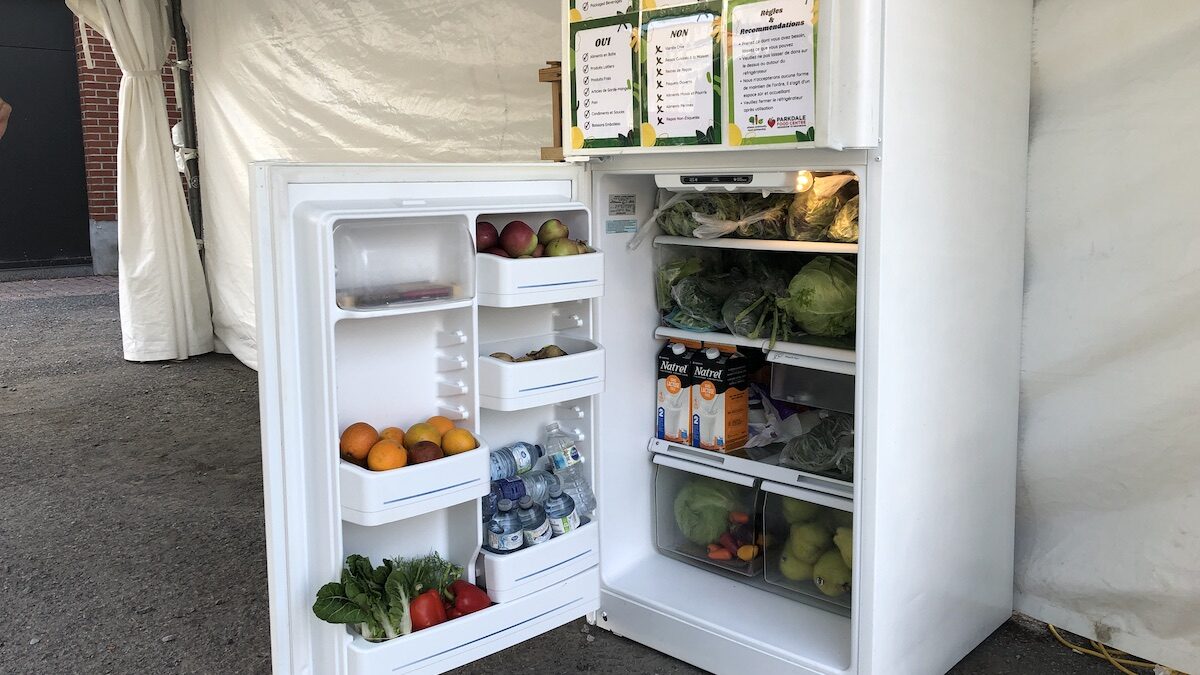 Ottawa’s first outdoor community fridge is open for business — the business of feeding those in need.

The fridge and a pantry shelf are installed outside the Parkdale Food Centre on Rosemount Avenue. The presence of the appliance is the result of a collaboration with the Ottawa Community Food Partnership and the Hintonburg Community Association.

Rebecca Dorris, neighbour experience and opportunity co-ordinator for the Parkdale Food Centre, says it’s already seeing a lot of traffic after opening this past Friday.

“It’s pretty brand new, but it’s this kind of an instant hit,” says Dorris. “I’m not at the centre every day, but the days that I am … when I go outside I see someone either stocking or taking from the fridge.”

The Parkdale Food Centre, and their partners across the city, have a wide variety of programs to combat food insecurity in Ottawa. In addition to supplying needed food stuff, the outdoor community fridge is serving to make the food bank itself more accessible.

“The biggest thing is accessibility, and just having something that’s barrier free,” says Dorris.

There are seven other community fridges across the city, but they’re all indoors. Dorris says COVID-19 has made them harder to access because of building closures and reduced hours. The indoor fridges are located at Morrison Gardens Community House, Bethany Hope Centre, Parkdale Food Centre, Somerset West Community Health Centre on Eccles Street, The Well, St Joe’s Supper Table and Rideau Rockcliffe Community Resource Centre.

“Our centre, like many, is closed over the weekend,” she says. “That tends to be a time … when it’s very difficult to get your needs met if you need food.”

The new fridge is open 24 hours, seven days a week, and is restocked by staff through the week and volunteers on the weekend. Community members are also welcome to contribute food at any time.

Gabriella Carrier posted about the new fridge in a community Facebook group after she first stopped by last week.

“I think when we know about each other’s struggles and shortcomings, we’re more willing to lend a helping hand,” she says.

Carrier believes the fridge will also allow people to better understand the hunger that exists in the neighbourhood. She says it will help more privileged people, such as herself, who don’t need to think about their grocery bills, help address food insecurity.

“I think it’s really impactful when you open that fridge and it’s empty,” says Carrier. “That means that people are hungry, and that there’s work to be done.”

For Karen Secord, executive director of the Parkdale Food Centre, the community fridge has been a long time coming.

Secord hoped to install one outside the Giant Tiger on Wellington in 2015. She had approval from the store’s manager, the city councillor, and had secured $1,000 to purchase the fridge but her board of directors was hesitant.

Concern over who would clean it, whether the city would object to it being on a public sidewalk, and who might interfere with the contents of the fridge caused them to install it inside the Parkdale Food Centre instead.

“We put six more fridges across the city, indoors, at social services agencies,” says Secord. “So we’ve had these indoor fridges all along, but then we wanted to put one outside.”

Secord spoke to the Somerset West Community Health Centre, who own and operate their second clinic at the building on Rosemount that houses the Parkdale Food Centre. Once the health centre gave the nod, she said, ‘OK, finally, I’m going to do it.’”

There are some limitations to what can be left in the fridge, such as no raw meat, no home-cooked meals, no leftovers, no open packages and no expired food.

But the rules for the fridge are few. Most importantly, everyone is welcome to take what they need and leave what they can. The fridge is supposed to be a “safe and welcoming space.”

Secord and Dorris hope to open more outdoor community fridges at other partner locations once this one is well underway.

“The more people know about this, the better,” says Dorris. “I think we’re going to try to expand it across Ottawa.”

She says if people have ideas or suggestions, they can email the Parkdale Food Centre. They work within the catchment area of Hintonburg and Mechanicsville but some of their other programming is in partnership with agencies across the city, and they’re always open to collaboration.

“We kind of experiment and have the first and then we’re always open to sharing some of our learnings as we go forward,” says Dorris.

Secord says a great way for community members to help out would be to donate old fridges they no longer need, that could be installed in other locations outside.

Carrier says the response to her Facebook post about the fridge has shown how excited and involved the community can be, but she is still looking ahead.

“I imagine I’ll be making posts about the fridge closer to the end of fall or early winter as people, maybe— they don’t forget about it but the excitement of it is worn off and they’re not going as frequently,” she says.

“That’s a huge part of making the community fridge successful— is engaging as many groups as possible.”