5 days ago 0 3 min read
We use cookies to provide a personalized experience for our users. By continuing to browse this site, you give consent for cookies to be used.
Got it!
Home > News > Social Issues > Pandemic highlights need for more Canadian-based breeding for guide dogs 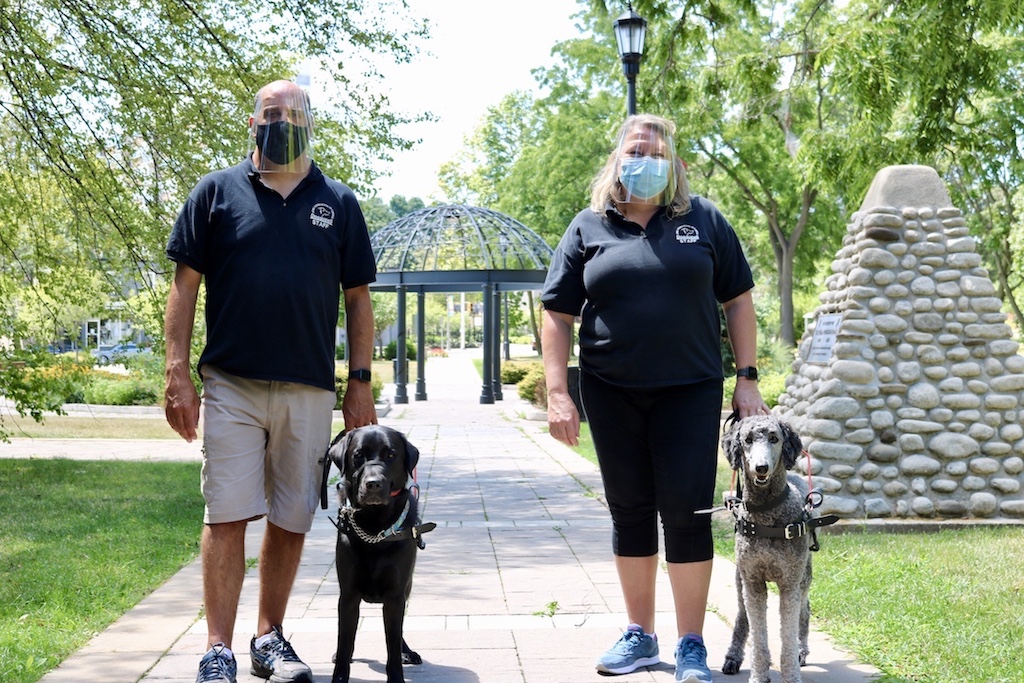 COVID-19 is highlighting the importance of developing Canadian-based breeding programs for guide dogs.

Canadian applications for guide dogs have surged 300 per cent since the pandemic began, according to the CNIB Foundation, the country’s main advocacy organization for people living with blindness or other visual impairments.

Diane Bergeron, president of the CNIB’s guide dog services, said the organization is “down in supply and up in demand.”

Bergeron explained that part of the increase in applicants seeking a guide dog through CNIB is because of pandemic-related border closures. Canadian guide dog users who have traditionally obtained their guides from U.S. organizations can no longer easily cross the border to train with the dogs.

“They suddenly had no dog to take them even to just walk around the block or to get out at all,” she said.

The main breeder CNIB relies on is based in Brisbane, Australia. But because of COVID-19 travel complications, puppies can’t be flown to Canada as usual.

“We usually get (the dogs) at eight weeks old, and we couldn’t do that because they would have to go through (COVID-19-related) security,” Bergeron said.

Bergeron said a CNIB supervisor will train the dogs in Melbourne with Vision Australia until the puppies are old enough to travel to Canada. This will allow the dogs to be trained at the proper age, so that they can work in Canada once travel restrictions allow.

CNIB also asked U.S.-based programs, such as Leader Dogs for the Blind in Rochester, Michigan, to drive puppies to Canada to avoid travel restrictions by air.

“The puppy that comes in eight weeks old right now is not going to be partnered with somebody for another 18 months to two years,” Bergeron said. “Getting these adult dogs from Leader Dogs and other schools is really helping us to put dogs into our program right now, and to get as many dogs out as possible.”

In return, while borders are closed, CNIB is instructing Canadian dog training students who were originally approved to learn in the U.S.

The organization also found a few Canadian breeders to help with dog supply, but Bergeron explained the new partnerships won’t be able to help the current demand immediately because the young Canadian puppies will need to undergo the training process.

“We’re trying to increase everything that we can to try and meet the demand,” said Bergeron.

Bergeron added that CNIB has long had a plan to expand over the next decade, including the launch of a guide dog-breeding program, in addition to hiring more staff and expanding the existing training facility in Carleton Place.

COVID-19 is accelerating all of these efforts.

“We’ve basically taken what we were planning to do in the next seven years and rolled it into one year,” said Bergeron.

She said the program trained 14 guide dogs in 2020 despite the pandemic. While this year CNIB is dependent on breeding partners, she said she hopes to double the number of guide dogs graduating this year up to 30.

“Puppies today are going to help somebody in two years,” she said.

With expansion comes increased costs. As a charitable organization, CNIB has stepped up its campaign for donations with star power.

CTV Your Morning co-host Ben Mulroney teamed up with CNIB as a celebrity spokesperson to encourage Canadians to donate to the cause.

“We went on a campaign to try and raise more money, so that we could increase the number of dogs we’re bringing into the program,” Bergeron said.

Campaigning efforts worked on Janice Labossiere, a media production team member at the University of Manitoba, who has been a CNIB guide dog sponsor for about a year.

Growing up on a farm with border collies, Labossiere said witnessing the mutual fulfilment of working dogs and their partners reinforced her support of the program.

”You can tangibly see how it improves the life of the folks who need these guide dogs to be able to manoeuvre in this world of ours — and then at the same time, the happiness of the dogs themselves,” she said.

Because of COVID-19, sponsors are not able to meet guide dogs. Labossiere said the letters CNIB sends to sponsors, detailing the equipment required and the skills dogs learn in their training, do a good job of bridging the familiarity gap.

“That’ll change somebody’s life to have that lifelong companion who’s looking out for them,” she said. “It’s a connection that you wouldn’t get normally.”

Maria Galindo, communications manager for Oakville, Ont.-based Lions Foundation of Canada Dog Guides, said the pandemic hasn’t affected its supply of guide dogs because the organization has its own, in-Canada breeding program. But its funding has been squeezed because of the public health crisis.

The organization does not receive government funding and relies on donations. During the pandemic, fundraisers have been difficult to host.

Galindo said the organization’s annual walk for guide dogs, which is its biggest national fundraiser, typically would bring in about $1.4 million. Last year, the Pet Value Virtual Walk for Guide Dogs only brought in about $548,000—less than half of the usual funds.

Each dog costs about $25,000 to raise and train, according to the organization’s annual report for 2019-20, though the dogs are provided to clients at no cost.

Technology could be here to stay

While donations are lower, Galindo said virtual events such as its 50/50 raffle are beneficial in that participants do not have to travel to the organization’s Oakville base to take part.

Virtual technology has also helped the organization carry out guide dog training during the pandemic. While instructors used to fly across Canada to assess clients’ homes, meetings are mostly online now.

In-person training is offered on a smaller scale, with class sizes shrinking from eight to three. Training is also being carried out through home placements, where guide dog instructors teach clients and train their dogs outdoors.

Galindo said the organization is looking into continuing with a combination of in-person and virtual training in the post-pandemic era.

“The instructor actually gets to see you train in your environment, versus training at a facility for three weeks,” she said. “You get to do a lot more personalized training that way.”

While Galindo said all seven of the organization’s guide dog programs have waitlists, some are longer than others. She said one of the most in-demand programs is the autism assistance program.

“Every time we open it up, we get 100 applicants right away,” she said.

The value of guide dogs

Nathan Styles, 13, is from Oshawa, Ont. He is one of many Canadians on the autism spectrum who benefit from a Lions Foundation assistance dog.

Nathan was matched with his dog guide, Titus, in October 2020. One of Nathan’s fathers, Daniel MacPherson, said Titus has taught Nathan empathy, responsibility and independence.

“He has learned to put someone (a dog) before his needs,” MacPherson said in an email.

MacPherson said COVID-19 stay-at-home orders prevent the family from training Titus in a variety of locations, but the silver lining lies in bonding.

“It has allowed Nate significant time to bond with Titus and become a stronger team in a very short amount of time,” MacPherson said.

Had their application process been delayed, MacPherson said the family would be experiencing a very different pandemic situation.

“He would be needing a lot more support from us than he is currently needing,” he said.

As COVID-19 presents challenges for guide dog organizations, MacPherson said it has never been more important for Canadians to appreciate the value of guide dogs.

“To anyone who has supported, you have changed lives in ways you will never realize,” he said.

Those looking to support CNIB or the Lions Foundation of Canada Dog Guides can register as donors at the organizations’ websites.

In the News: Tuesday, March 2