1 week ago 0 1 min read
We use cookies to provide a personalized experience for our users. By continuing to browse this site, you give consent for cookies to be used.
Got it!
Home > Business > Small Business > Parkdale Night Market has become a welcome ‘lifeline’ for local distilleries and breweries 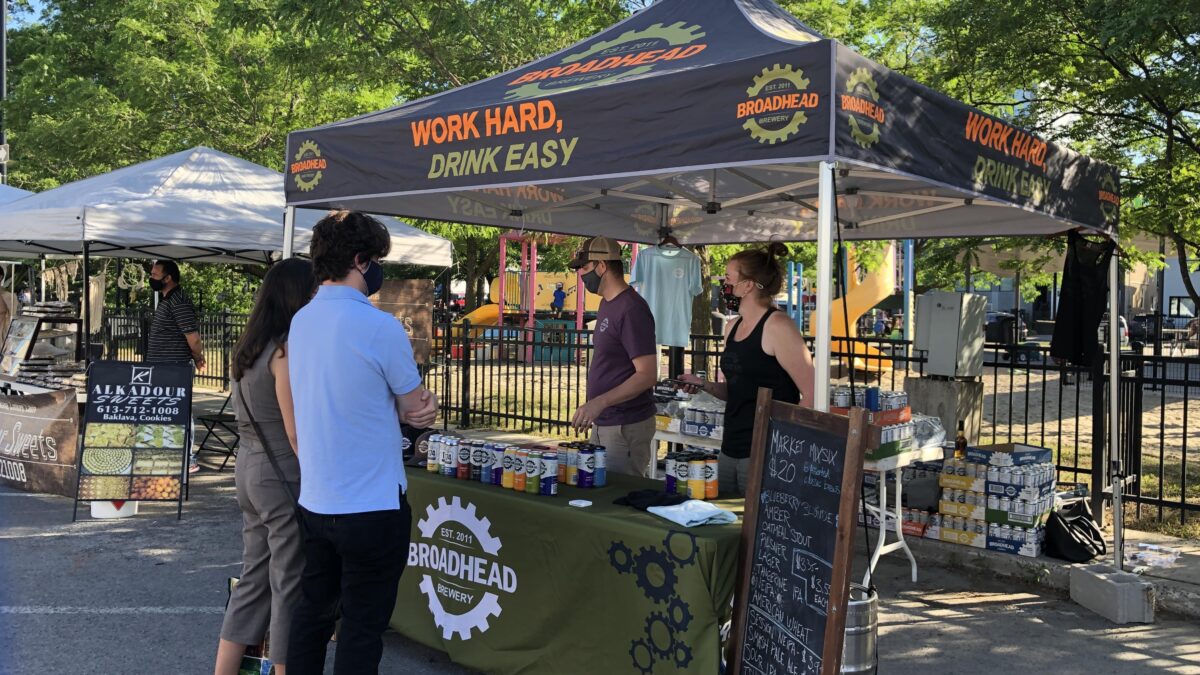 The line for craft beers and seltzers at Dominion City Brewing Company just kept getting longer as the sun set on the Parkdale Night Market Wednesday.

The market has been a staple in Hintonburg since 1924. But the market’s first night market opened last week, giving vendors more opportunities to reach customers. Parkdale now also hosts a variety of local distilleries and breweries after a change in regulation made it possible for alcohol to be sold in markets.

“Our liquor laws were pretty archaic going into this,” says Bolduc in between customers. “It’s nice to see them liberalizing a little bit.”

The Ontario government amended a regulation under the Liquor License Act in April allowing breweries and distilleries that have their main production sites in Ontario to sell products at farmer’s markets. The change has come as many of these businesses have struggled under COVID-19 restrictions.

“Especially after the year that we’ve had, we’ve been able to create a new way to bring our brand to consumers,” says Ross Muir, the director of sales and marketing at Broadhead Brewery.

The night market gives the 10 year old company a chance to catch the evening rush.

Dominion City Brewing Company opened seven years ago in Ottawa’s east end. They specialize in seasonal brewing, and their summer beers and seltzers have been flying off their outdoor shelves. After moving their business to deliveries earlier in the pandemic, being out in the community, dealing with people more directly, is a welcome change.

“It’s been cool to finally talk to people again,” says Bolduc. “I’ve been doing deliveries and stuff for the past year.”

Having access to locals through farmer’s markets has connected these vendors to countless consumers who can learn about their stories.

Dairy Distillery in Almonte, Ontario takes the by-product of distilling milk and, by adding yeast, turns it into spirits. The environmentally friendly process that creates Vodkow vodka is one they get to tell consumers in the market.

“It’s been nice to be able to explain our story, because it’s an interesting one,” says Alex Sirois, from Dairy Distillery.

Breaking into the market has also helped to boost sales.

“The people here have given us a lifeline during this pandemic that we weren’t privy to before,” says Adam Malmberg, co-founder of Dunrobin Distillery.

They only started selling spirits four years ago when they saw a gap in the market for unique distilleries. Since then, local support has been overwhelming. The night market has been another way for them to connect with community members, and boost morale among the vendors.

“The outpouring of love from the community has been outrageous,” says Malmberg. “Local patrons are willing to support local, and it’s been absolutely breathtaking.”

As the province continues to reopen, the vendors at the Parkdale Night Market are excited to see even more patrons.

“It’s actually nice to be able to host people outside their homes for the first time in a long time,” says Sirois.

With this change in regulation, Muir hopes to see even more breweries in markets across the city.

“I think that it’s important that there’s rotation of these breweries through farmer’s markets, to expose different brands that people haven’t heard of.”