2 days ago 0 2 min read
We use cookies to provide a personalized experience for our users. By continuing to browse this site, you give consent for cookies to be used.
Got it!
Home > Health > Struggling in the shadows: Pandemic leaves backstage workers facing financial, mental health crises 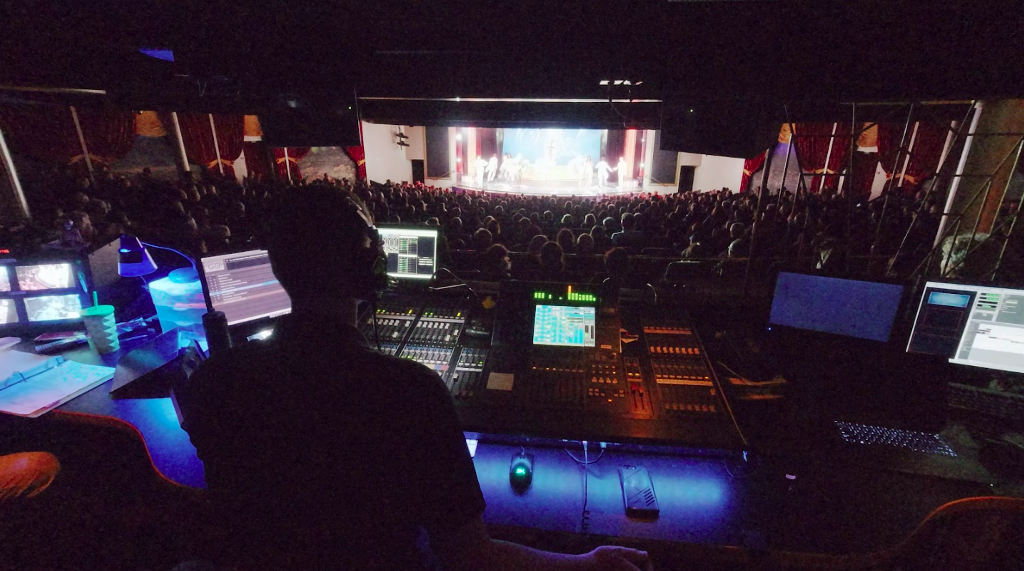 Lydon Thorpe is seen here in happier times, mixing the sound for a show with a cast of singers and dancers aboard Norwegian Cruise Lines’ Pride of America in January 2020, off the coast of Hawaii. [Photo courtesy Lydon Thorpe]
Arts & Culture

Backstage workers in the country’s live entertainment industry are struggling with mental health issues, but little research exists to highlight their predicament.

Lydon Thorpe produced sound for live entertainment on a cruise ship starting almost every day at 9 a.m. and ending work around midnight for six months. After that, he would take his semi-annual vacation on land.

Since last April, the audio technician has spent most of his days in a shared three-bedroom apartment in downtown Toronto, surviving on the Canada Recovery Benefit and sporadic freelance work.

“At most, I will work two or three days a week,” said the 23-year-old Thorpe. “It’s not enough income to support myself.”

According to Statistics Canada’s  report on labour force characteristics by industry, information, culture and recreation workers, which includes Thorpe, faced a 15.1-per-cent drop in employment between February 2020 and February 2021. That represents a loss of nearly 117,000 jobs from a pre-pandemic labour force of about 773,000 people. Statistics from May 2021 shows an increase in employment in the sector.

Justin Antheunis, president of IATSE Local 58, the union representing about 500 stagehands in Toronto, says 95 per cent of the nearly 30,000 stagehands across Canada lost their jobs when the pandemic hit.

Besides job loss, mental health pressures are taking a toll on the community.

Thorpe, who had worked in the live-entertainment industry for the last six years, said he was depressed and anxious throughout last summer and fall.

“I really didn’t feel very good,” Thorpe said. “Mostly just because I didn’t know — I still don’t know — how long it’s going to be until I can find consistent work again.

“For me it is a feeling like I don’t really have a purpose right now. And I don’t really know what I’m doing,” he said, struggling to find the right words to describe his state of mind.

The loss of identity appears to be common for many backstage crew in the live entertainment industry. The business has been one of the hardest hit sectors that went into total shutdown last spring and has not made a comeback in 13 months, especially in Ontario.

While the media has focused mainly on performers, people who set the stage for live entertainment have remained in the shadows. Their suffering — financial and mental, causing many workers to leave the industry — has received little attention.

Very little data and research exists on the pandemic’s impact on backstage crew members, but some pre-COVID studies in the U.K. and Australia showed that backstage workers tend to face more mental health issues than the general population. The studies found that the stressful work environment hurts backstage workers’ mental wellbeing, even though working in the arts and culture sector provides them with a sense of belonging.

The pandemic took away not only their work but also a key part of the identity of backstage workers.

Some in the community have resorted to alcohol and drugs, said Dave Fulton, who has worked in various behind-the-scenes roles in the live entertainment industry for two decades.

“When you’re used to continually going, it keeps you occupied, keeps your brain occupied, keeps your bad habits to a minimum,” said Fulton, who was the stage manager at Aurora, Ont.’s annual Magna Hoedown country music festival before the pandemic. “But now that things have shut down, it’s been difficult for some of us, for sure.”

Kayt Lucas said she has lost at least 10 peers to drug overdoses and mental health problems in the last year.

“The hardest thing was to get anybody to pay attention to us, because the backstage community technically were born to be hidden in the darkness next to the biggest stars in the world, and that’s the whole point,” said Lucas, one of the few female Canadian riggers working in live entertainment for 20 years.

Mental health issues may prevent some from joining the industry when it returns, feared Morgan Myler, vice-president of IATSE Local 58.

“We’ve also had some suicides in the past year and a half, where people have left the industry, or (there were) deaths that looked like suicides,” Myler said.

He noted that none of those lost to suicide were members of the union.

Although there is no recent figure for suicides among backstage workers in Canada, a 2016 study by Victoria University in Australia found that suicidal attempts among lighting and sound techs and other support workers of the entertainment industry were twice the Australian national average.

Clinical therapist Errin Williams led a survey of the music industry is 2018 and found that 20 per cent of its participants reported having suicidal thoughts within the previous month. The national average in Canada, by comparison, was about 3.3 per cent in the previous 12 months, according to Statistics Canada’s 2012 Mental Health Indicator Survey.

“There is a lack of research in general about the music industry,” said Williams, “and even less, specifically (about) music industry professionals like lighting, audio techs, stage management, agents, booking agents, managers.”

Ace Piva, executive director and co-founder of Over the Bridge, a mental health wellbeing platform for the music industry, said there has been an increase during the pandemic in the number of people seeking mental health support.

Piva, also an addiction recovery coach, said he would provide support to three or four people a month before the public health crisis. Now the number has gone up to 15-20 people a week.

“In the music industry, their service is providing people with a memorable time,” said Piva. “That opportunity has been taken away — to be helpful, to be a team with one another, to work together to create these (events).”

For Thorpe, his friends were the people he worked with on the ship. The Newfoundlander does not know many people in Toronto, where he has lived for short periods during his vacations.

“It’s been difficult trying to find people to hang out with and whatnot,” said Thorpe, who tried seeing a therapist last fall but had to stop because of the cost.

Mental health counselling was covered under the medical coverage from his work, but only when he was onboard the ship, said Thorpe, who is not a union member.

Thankfully, Thorpe kept in touch with his buddies from the ship. Many of them were able to find work in theatres and other live entertainment venues south of the border. He, too, is considering moving there.