1 week ago 0 1 min read
We use cookies to provide a personalized experience for our users. By continuing to browse this site, you give consent for cookies to be used.
Got it!
Home > Community > Indigenous > Powwow dancers showcase talents during virtual Summer Solstice Indigenous Festival 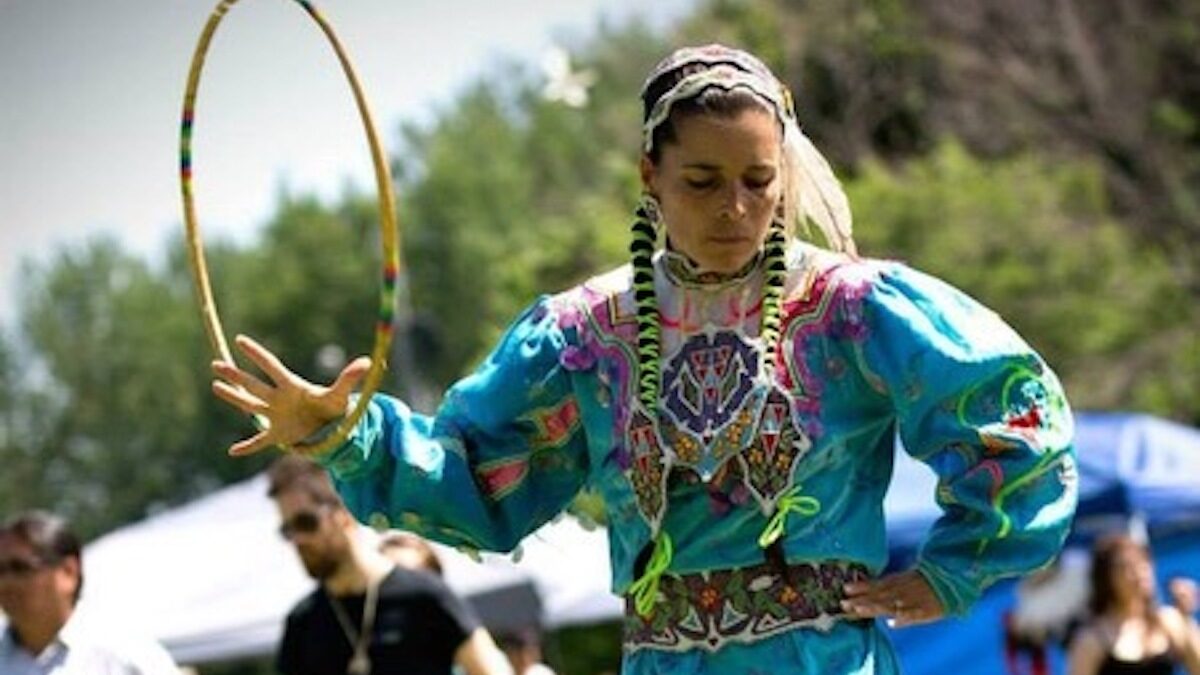 Powwow dancers from across North America virtually came together this week for the Summer Solstice Indigenous Festival (SSIF) Pow Wow to showcase their talents, traditions, and culture.

This year marked the second annual virtual powwow competition, hosted by SSIF and the Social Distance Powwow Facebook group, a page that has added almost 250,000 members since March 2020. The group was created during the beginning of the COVID-19 pandemic to move powwow celebrations online and bring Indigenous communities together.

“Powwow celebrations are social events where people of all colours, all ages, all races are invited to witness the talents of Indigenous people,” says Whitney Rencountre, co-founder of Social Distance Powwow.

‘Our culture was put on pause’

“It feels like our culture was put on pause,” he says. By creating the group, “we helped a lot of people during the time that people needed it the most.”

“I think the viewers that truly appreciate it the most are the ones that, even prior to the pandemic, could not travel, whether it’s health issues, or the elderly, or for whatever reason not able to get away to attend the actual celebrations in person,” says Rencountre.

This year, the SSIF Pow Wow competition has been extended from three days to a week-long event to showcase a variety of different powwow dances including jingle, grass, fancy shawl, hoop, and smoke.

The finalist’s dances are broadcasted on a Facebook livestream and the winner is determined through an online poll.

Celina Cada-Matasawagon, 52, placed first in the adult hoop dance category. She is from Zhiibaahaasing First Nations, located on Manitoulin Island. Currently living in Manotick, she’s been dancing for two decades, she says.

Hoop dancing, she says, is a part of her. “It was a passion that I knew was inside me and I just needed to find that.” After attending powwows and learning from others, she developed her own style, although she says she is mainly self-taught.

Cada-Matasawagon’s hoop dance is steady, focused and smooth. She keeps time to the music with her feet, continuously stomping the ground as she maneuvers her hoops into intricate shapes.

She says she recognizes the importance of health and fitness, which is part of the reason why she dances, but she also dances to keep her culture alive.

The powwow competition gives dancers an opportunity to share their talents and connect with their culture.

Bailey didn’t grow up on the Pikwakanagan First Nation. As a result, she says she wasn’t exposed to her culture and didn’t have someone to teach her how to dance.

After attending a powwow for the first time and attending a dance class for a few weeks, she says she went home and watched YouTube videos to learn the steps. Ever since then, she says she’s danced whenever she could and returned to dance in her community’s powwows.

In the video she submitted to the Social Distance Powwow competition, she proudly holds a dark shawl above her shoulders like an eagle soaring through the sky. A medicine wheel is placed boldly in the middle of the shawl. Red, white, yellow, and black fringe twirl around her as she moves, representing seven feathers and traditional teachings.

Bailey has been dancing since she was seven or eight years old, she says. Last year, she placed fourth in North America in the Social Distance Powwow competition.

“When I found out my community’s powwow ended up being cancelled, I was devastated for like a week,” she says. To have a virtual competition was “a light at the end of the tunnel.”

But for Cada-Matasawagon, a virtual powwow is just not the same as an in-person powwow.

“We hope by next near we are able to get back into that arena,” she says.

Rencountre says they are currently planning their first annual in-person Social Distance Powwow, but the Facebook group is here to stay. They will continue to broadcast powwows live on location through the page, he says.

“It’s not just about powwows,” he says. “The page brings people together and showcases Indigenous people and shows the strength and the power of the unity of Indigenous voices and talent and efforts to really help other people in the time that it’s needed the most.”

“All we hope is that people have a better appreciation for Indigenous culture after they are able to view and participate in our celebrations.”

For those hoping to attend the drive-in final event of this year’s Summer Solstice Indigenous Festival, it’s been postponed a week because of weather. The show will now be held on June 29 at Wesley Clover Parks from 7 to 11 p.m. The evening. will feature Inuit Throat Singing and Hoop Dancing and performances by Silla and Rise and Twin Flames.