2 weeks ago 0 1 min read
We use cookies to provide a personalized experience for our users. By continuing to browse this site, you give consent for cookies to be used.
Got it!
Home > Health > Mental Health > Psilocybin advocates press government for more ‘medical assistance in living’ 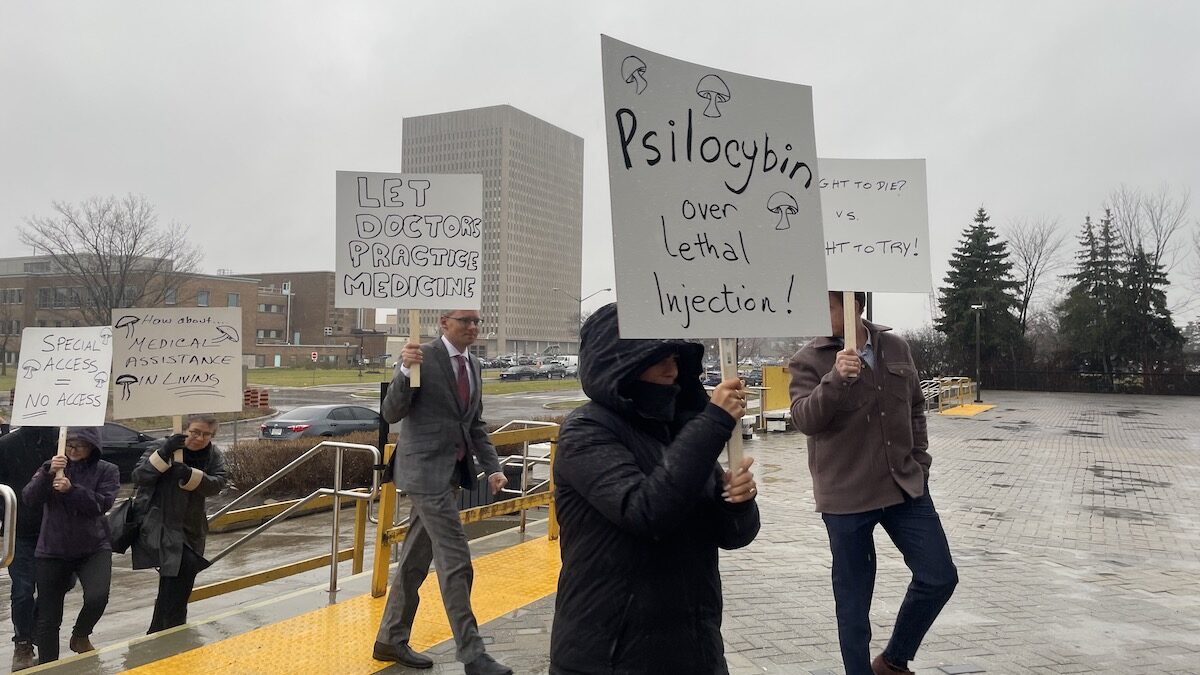 TheraPsil advocates demonstrate outside of the Brooke Claxton Building, headquarters of Health Canada, in Tunney's Pasture. They are pushing for expanded exemptions from drug regulations that would allow greater use of the magic mushroom hallucinogen in psychotherapy for patients suffering end-of-life distress. [Photo © Emily Putnam]
Health

A grassroots organization is lobbying in Ottawa to make mushroom-assisted psychotherapy available to Canadians suffering from end-of-life distress.

Members of TheraPsil, a B.C.-based group of health-care professionals, patients and advocates, are pressing federal politicians to back rules that would allow greater use of psilocybin — the mushroom-derived hallucinogen — for those facing terminal illness.

“We really just want to bring the fight straight to their door because patients are being ignored,” John Gilchrist, TheraPsil’s communications and training specialist, told Capital Current.

“To our great dissatisfaction we’ve been completely ignored by the ministries of health, which is the reason that we came here to meet with them,” he said.

He said he hoped coming to Ottawa would raise the alarm on the urgent need to expand access to psilocybin beyond its current tightly restricted availability through a federal “Special Access Program” under Section 56 of the Controlled Drugs and Substances Act.

Three magic mushroom retail outlets have opened in Ottawa this year after the Special Access Program was initiated, but the stores are operating in uncertain legal territory. Meanwhile, advocates for expanding the legal use of psilocybin have stepped up their campaign.

“When the ministers ignore you, sometimes you have to go right to their office, and they’re ignoring us again,” said Hawksbill. “It’s a great disappointment and a stain on our Canadian healthcare system.”

‘It worked for me. I had end-of-life distress, anxiety (that was) quite severe, but the psilocybin completely cured me of it. I’m no longer afraid of dying.’

The group recently gathered for a protest at the Brooke Claxton Building at Tunney’s Pasture, the west-end Ottawa campus that houses the headquarters for Health Canada.

The activists were seeking a meeting with federal Health Minister Jean-Yves Duclos for the 422nd day in a row to push for expanded federal permission to use psilocybin for psychotherapy purposes.

Psilocybin, the active psychedelic ingredient in certain mushrooms, has been shown to help with depression, substance use and end-of-life distress or anxiety.

In January 2020, Health Canada changed its Special Access Program (SAP) to allow physicians to request the drug for psychotherapy purposes.

Since then, little progress has been made on expanding medical psilocybin use.

Janis Hughes, a Stage 4 cancer patient in Ottawa, said she applied for medical access to psilocybin through TheraPsil for a Section 56 exemption, but it has remained under consideration. After six months, she decided to obtain and administer the psilocybin herself.

“It worked for me,” said Hughes. “I had end-of-life distress, anxiety (that was) quite severe, but the psilocybin completely cured me of it. I’m no longer afraid of dying.

“I’m not eager to die, so I’m doing everything I can to put that date off. But when it comes, I’m going to greet it with open arms because I’m no longer afraid.”

She says she has felt neglected by the government and hopes to put pressure on MPs to grant immediate access to psilocybin for patients like her.

Medical Assistance in Dying, or MAID, is federal legislation that allows eligible Canadian adults to request medical assistance in dying.

Facing a planned March 2023 extension of MAID to patients whose sole medical condition is mental illness, the federal government will now postpone implementation in response to calls from a number of psychiatrists calling for more research.

Hughes said there is “no reason to be denying it (psilocybin psychotherapy) to people.”

Dr. Houman Farzin, a therapist and member of the TheraPsil training committee, is supporting the cause after failing to gain permission for experiential training of other therapists.

“This is a community-type practice, and to see this community in action standing up for patients that are suffering is very rewarding.” said Farzin.

Duclos has yet to comment on the requests from psilocybin advocates.