6 days ago 0 5 min read
We use cookies to provide a personalized experience for our users. By continuing to browse this site, you give consent for cookies to be used.
Got it!
Home > Privacy > Recording device in hospital waiting room not a privacy violation, says Ontario commissioner 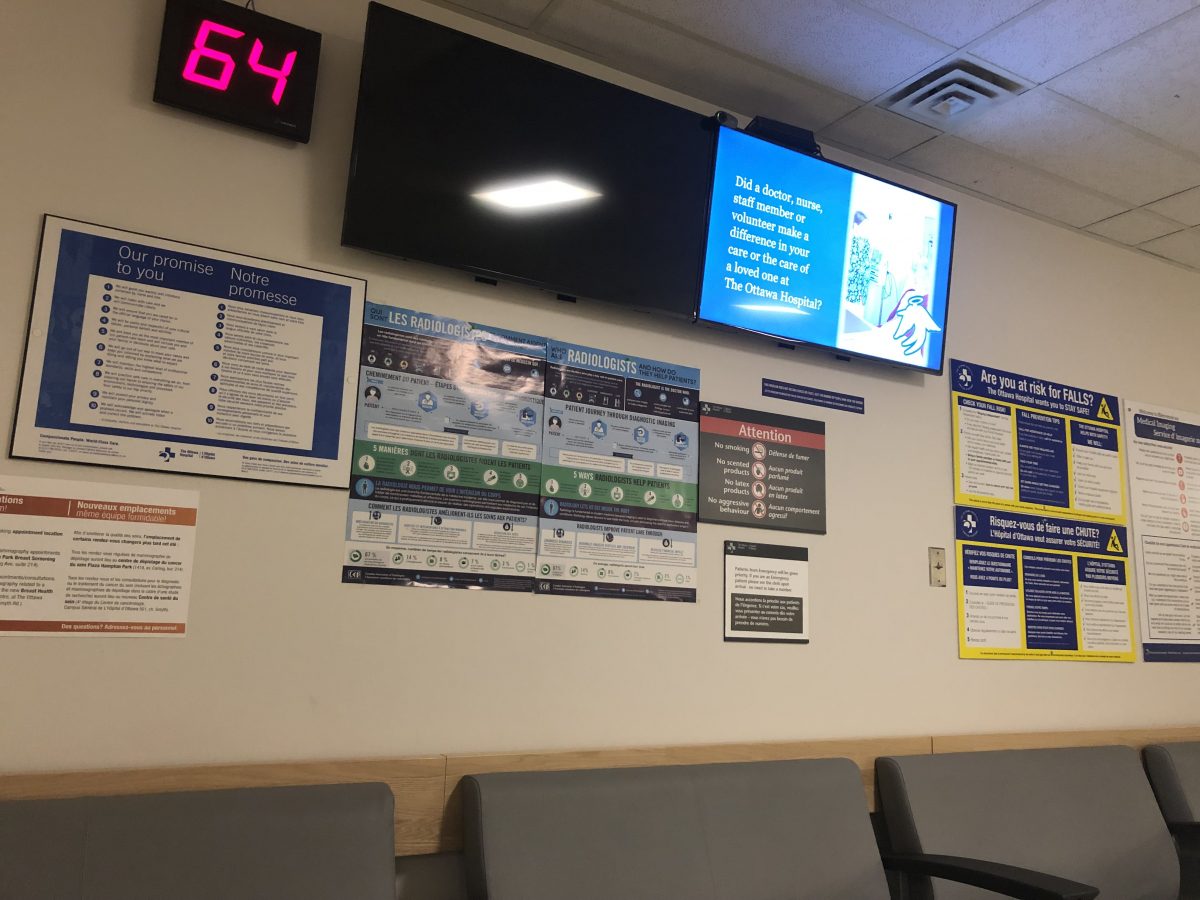 This is a photograph of the camera taken before it was removed. It is a small device sitting on top of the TV monitor. [Photo @ Cara Powell]
Health

A third-party camera placed next to a television in a radiology department waiting room at the Ottawa Hospital was not a breach of privacy, according to the Information and Privacy Commissioner of Ontario (IPC).

The camera first came to the attention of the IPC after Capital Current came forward with privacy concerns from a source within the radiology department of the hospital’s General campus. The individual asked not to be named for fear of reprisal.

The camera was subsequently removed in March 2019 after being in operation for around five months.

When asked for an update on the investigation in September, the IPC responded in an email statement saying “the hospital has advised that the sensor used in the waiting room has been removed and will not be reinstalled.”

The radiology department employee remained concerned, “we still don’t know anything, we haven’t been told exactly what was being filmed beyond it capturing our eyes whenever we look at the TV screen,” the source said. “Our concerns don’t go away just because the camera was taken down.”

As previously reported, the Ottawa Hospital said in an email statement responding to questions from Capital Current that “no identifiable patient information was collected.”

The Ottawa Hospital’s communications co-ordinator, Michaela Schreiter, wrote that the camera “was part of a pilot to deliver more relevant content to viewers.”

The IPC followed up on Oct. 9, saying that “the matter has been investigated, and it has been determined that a breach of privacy did not occur.”

According to Brian Beamish, Information and Privacy Commissioner of Ontario, “the device in question was capturing raw data about the number of people who viewed the screen on an hourly basis. It did not collect identifiable personal or personal health information, images or sound.”

“I’m obviously relieved there was no privacy issue but I wish we knew how it worked … it’s a camera, it looked like a camera, I’m not sure how it knew when you were looking at the TV but we’ve never been told that information,” the source said.

Should the hospital use similar devices in the future, Beamish recommends they “place a notice in the area that explains that the device is not collecting personal information to avoid public concern.”

A small sign reading: “This webcam does not record voices or faces, just the number of people who view the screen,” was placed beneath the camera following complaints from hospital staff.

“We expect hospitals and other public institutions to conduct a detailed assessment of the potential privacy impacts of new programs or services, before launching them, to address any risks and ensure compliance with Ontario’s privacy laws,” said Beamish.

It is not confirmed whether the hospital completed such an assessment, though Tobi Cohen, the communications advisor for the Office of the Privacy Commissioner of Canada (OPC), confirms that the camera was removed “as a result of our intervention.”

Because the camera was installed by a third-party ad company, Creative Display Technologies, jurisdiction over the concern is shared between the IPC and OPC.

Cohen confirmed that “we would have oversight over the ad company, assuming it collects, uses or discloses personal information in the course of a commercial activity.”