1 week ago 0 1 min read
We use cookies to provide a personalized experience for our users. By continuing to browse this site, you give consent for cookies to be used.
Got it!
Home > Business > Small Business > Restaurant owners cautiously optimistic about summer as patios open to customers 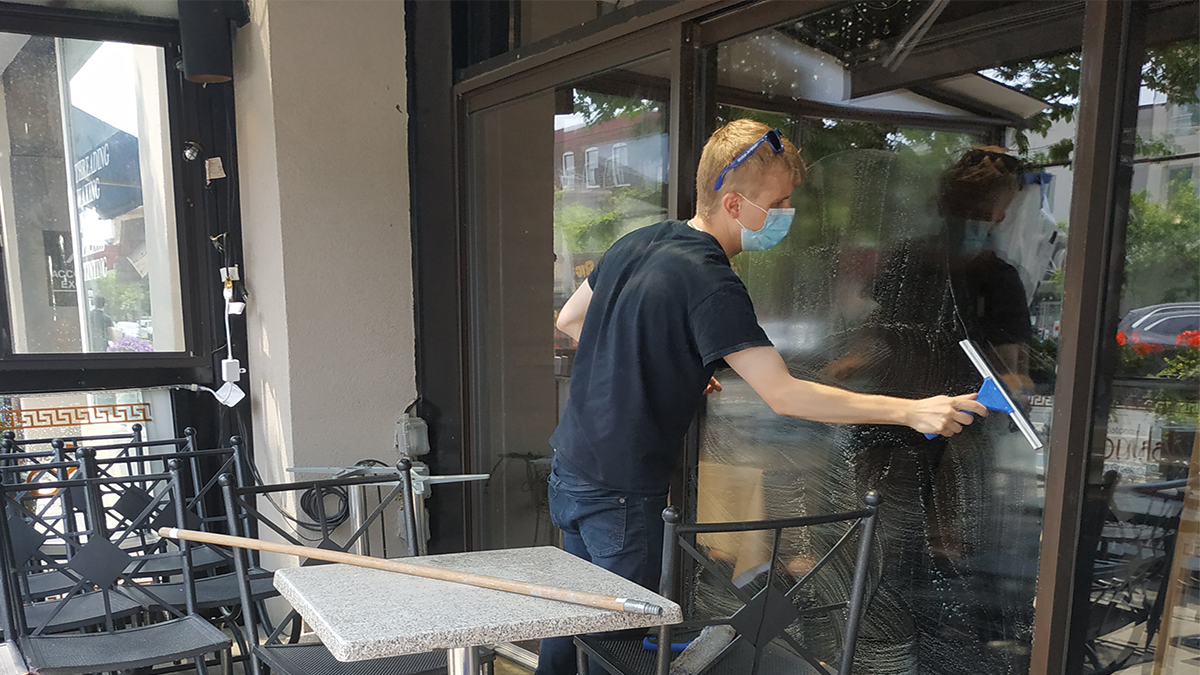 Philip Gilmore cleans the windows of Soulas, a Greek restaurant in the Danforth area of Toronto. [Photo @ Tamanna Khan]
Consumers

TORONTO — After two months of delivery and take-out, Ontario eateries are once again welcoming their customers to sit at restaurant patios and enjoy the full ambience of hospitality.

With more than 60 per cent of Ontarians vaccinated and COVID-19 case numbers on the decline, the province bumped up the Step One reopening date by three days to June 11. The provincial government has also ramped up the rollout of the second dose in certain hotspot regions where the Delta variant has taken hold.

“I was very happy, very excited that we gain one weekend,” said Chris Christodoulou, co-owner of the Greek restaurant Soulas in Toronto’s Danforth area. “That means a lot for us, after such a long lockdown.”

Sean Fleming, co-owner of the Il Fornello chain of Italian restaurants, says he has lost track of the number of times restaurants were allowed to reopen for in-door or patio-dining and then told to close again in the last 15 months.

But Fleming said he is happy that this time the reopening was announced earlier giving restaurants owners enough time to prepare.

The last time patio-dining was allowed in Toronto, it lasted for only two weeks in March. Fleming said that he had to scramble to arrange for staff, supplies and other amenities all within 24 hours only to close again soon after.

A problem both Christodoulou and Fleming face is the shortage of skilled staff.

Fleming says skilled line cooks are very hard to find because many have left the profession. Christodoulou seconded that.

“They couldn’t wait for us to reopen,” he said, “So as owners, we’re going to have to do a lot more work to cover the shortages.”

Not everyone is worried by the staff shortage though. Egyptian restaurant Papyrus’s owner Amr Elimam said he has been preparing to reopen since March.

“I knew when we open, we’re going to need staff. So, I focused on making sure that I have a good team in place,” said Elimam, adding that he did not lay off any employees.

He took notes on the challenges restaurants in Israel had faced, when their economy restarted in March and reasoned such trends were likely to take place in Canada too, as more people got vaccinated.

Restaurant owners such as Fleming are concerned about the potential for a fourth wave associated with the Delta variant.

“I do fear that, this may not be over. And I do hope that we can be smart this time around about how to prevent another widespread outbreak of another variant that would be difficult to control,” Fleming said.

Besides the threat of virus, an immediate nuisance for patio-dining is bad weather.

Lunidas Halaris was negotiating with awning contractors in front of his eatery, Christina’s on Wednesday, when he spoke with Capital Current.

“Most people won’t come if it is rainy or windy,” said Halaris, adding that in the long-run restaurants won’t survive on patio dining rules that allow four people from the same household at one table.

Despite the limitations, Elimam, said he chooses to err on the side of caution on indoor dining.

He said that the reopening should be measured and science-based.

“That’s the worst thing for business — you jump into something and then roll it back in,” Elimam said.

Despite the rhetoric, Canada lags behind other countries in joining the digital world

Places of worship in Ottawa looking forward to in-person services