6 days ago 0 5 min read
We use cookies to provide a personalized experience for our users. By continuing to browse this site, you give consent for cookies to be used.
Got it!
Home > Life > Road trip realities: Van dwellers adapt to the pandemic world 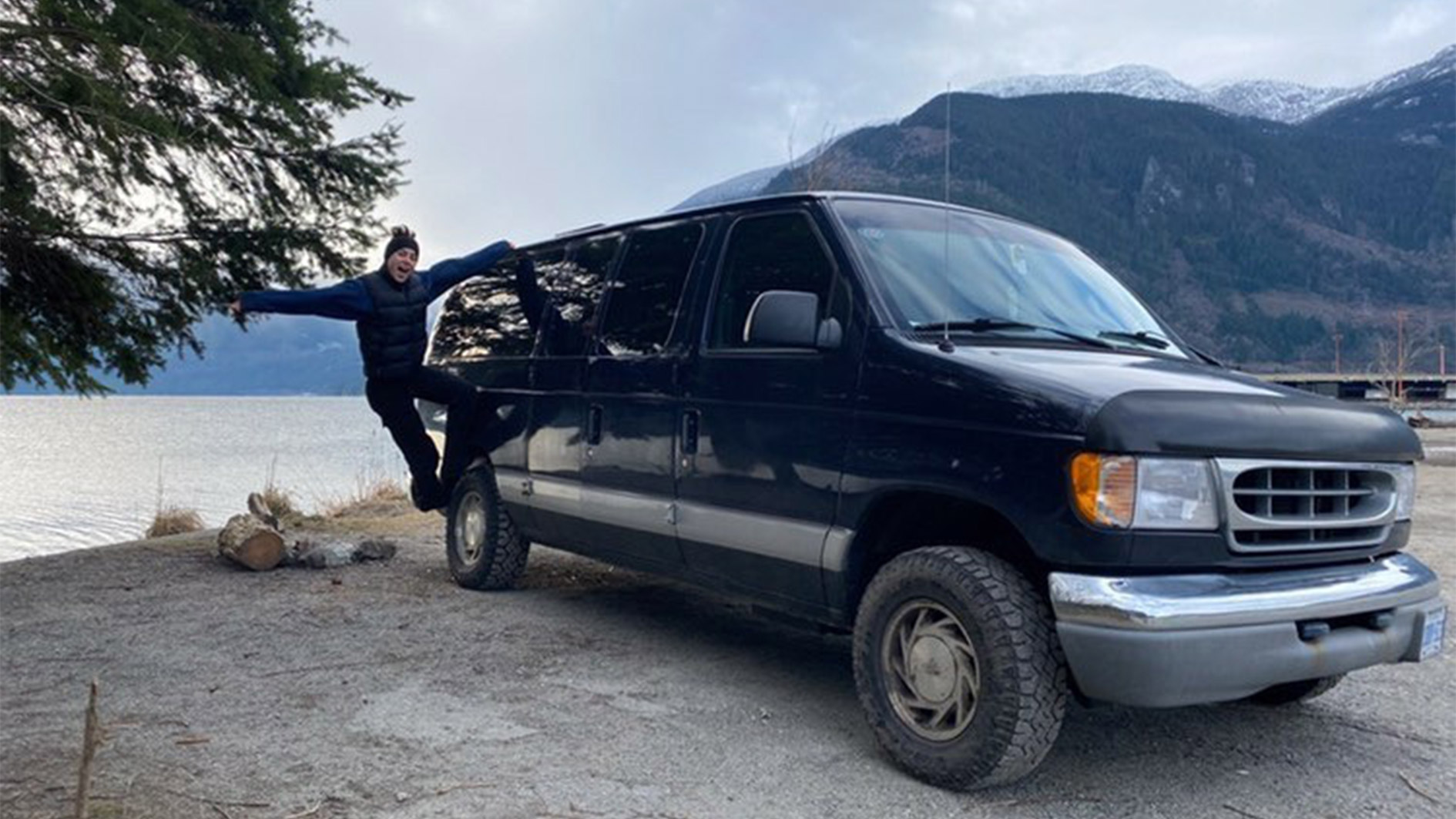 Van-dweller Jayda Saydam is seen her hanging off the side of her home on wheels. [Photo © Jayda Saydam]
Canada

By Olivia Joerges and Maya Reid, 1 year ago 0 10 min read

Since the start of the pandemic, some Canadians have taken to exploring their own backyard with trips to different national parks and cities across the country. Some of the more ambitious have hopped on board the van life — building their own tiny home on wheels to see Canada and feed the wanderlust that’s been building since last March. As it turns out, the reality of van life isn’t all Instagram makes it seem.

What is van life?

The idea of living in a home on wheels has been around since the 1960s, popularized by those who focused more on life experiences than its material goods. Van life describes the recent movement towards living in vans, allowing people to travel more while working and spending less.

Now in 2021, social media platforms are brimming with photos and videos of people living in their vans and RVs. A recent search for #vanlife yielded more than 9.1 million posts on Instagram.

According to Project Van Life, an online community hub for van dwellers, the van lifestyle attracts people for a myriad of reasons, and it tends to look a little different for everyone.

But for a lot of people, the benefits to the lifestyle are similar, including: ridding yourself of rent, escaping the ‘9-to-5’ grind, saving money and working from anywhere in the world.

What kind of people live the van life?

Jayda Saydam, originally from Toronto, lives in her van in Squamish, B.C. She is a recent graduate of Concordia University’s design program, where she studied the meaning of ‘home’ and what makes people feel comfortable in the spaces in which they live. Designing a van was only meant to be a final project for school, but she took it as an opportunity to learn more about the lifestyle and herself.

Saydam completed work on her van and started her trip in November, 2020, making the journey from Toronto to B.C. in eight days, trying to outrun winter weather.

Saydam said that she has never had a problem being by herself but the shift to van life in the middle of the pandemic has made her discover other sides of herself too.

“I’m realizing that I’m way more extroverted than I thought, and I will pick a night with friends over a night in my van by myself,” she said.

Steven Price-Williams has been living in his van in B.C. since the end of June 2020. He originally outfitted the van so he could take in the Burning Man festival in Nevada, but when the border closed and the pandemic forced organizers to cancel the event, he took his van across Canada.

Price-Williams left the Ottawa area and worked his way across Ontario making stops in Toronto, Tobermory and Thunder Bay. He then drove straight through the other provinces until he hit the Rockies in Alberta in the summer. That’s when he slowed down and started exploring Alberta and British Columbia.

Saydam and Price-Williams outfitted their own vans. Price-Williams had the DIY skills himself and Saydam got help from neighbours. Despite their hard-work, both said you don’t need a lot of fancy finishes to be comfortable.

“People will often be like, ‘Oh, I’d have to like save up for forever and get some amazing van,'” said Price-Williams. “But it’s not true, it could be done pretty soon. Just do a lot less. It doesn’t have to be super Instagram-worthy all the time.”

How has COVID-19 changed van life?

COVID-19 has changed the way Canadians socialize. Pandemic restrictions on social gatherings differ from province to territory, and so do travel exemptions, but there are no travel restrictions federally for Canadians unless flying outside the country.

In Ontario and Quebec, some fines may be given in red zones if caught violating restrictions, and residents are urged not to travel outside of province unless essential.

However, there are no clear regulations or legal fines in place to prevent Canadians from travelling between provinces, much to the delight of van dwellers.

Despite all of the restrictions COVID-19 has posed on Canadians, travellers can still drive across the country without the fear of fines. However, there’s more to worry about in the pandemic van life than being ticketed.

For Price-Williams, one of the inconveniences he’s faced is finding a bathroom. He doesn’t have a bathroom in his van, so finding a place to use the washroom and shower during the pandemic has been a challenge.

“It’s just because of COVID-19 that it’s hard to find a shower,” he said. “Normally it wouldn’t be such a problem.”

During summer, Price-Williams used an outdoor van shower so he didn’t have to worry about going into town. Instead, he spent most of his time in the woods or surfing near Tofino, on the west side of Vancouver Island.

“We actually had like a whole camp going on there, and there were a bunch of us and we all had vans and camped out sort of in the Crown land near Tofino,” he said.

For most of a month, Price-Williams spent his time away from towns and cities, and only came into close contact with his surfing group.

“We just like to wake up, go surf every day, pair off to figure out which beach everyone’s going to, and then come back and have a fire at night,” he said.

Price-Williams explained that there has been a feeling of being scrutinized and judged when travelling through towns and cities during the pandemic.

“There’s that feeling of being judged by [your] plate all the time, like more than normal because even certain towns — not everyone’s down with a lot of van life people showing up,” he said.

Price-Williams explained that COVID-19 has made some typically more welcoming cities wary of strangers and van dwellers alike, and sometimes he would hide his plates to avoid the ire of the locals.

“I just park with the plate, like in the snowbank,” said Price-Williams, laughing.

There are influencers all over the world eager to share their adventures and excitement of living in a van but they rarely show the trials and tribulations.

Saydam pointed out that the influencers promoting and romanticizing this lifestyle are living in vans that typically cost around $40,000 before any renovations are done to the inside.

Money is something that these influencers don’t need to worry about because they are getting paid to post brand deals and sponsorships. But for the average van lifer dipping into their savings is fairly common.

Saydam has decided to say in Squamish, B.C. where she has recently been hired to work as a substitute teacher for extra curricular program for kids. But because this is only on-call and she was only recently hired, she has been saving since November.

Price-Williams is in a similar boat to Saydam but he works online for a start-up out of Ottawa. Though because it’s a start-up and he only works part-time for them right now, he logs about six hours a week which is not an income to live on.

Saydam says people need to understand that there are people who can afford to choose van life, but there are also people who live in a vehicle out of necessity.

Saydam also points out that this is not necessarily a simpler lifestyle. In reality many of life’s small conveniences are taken away.

There have been many moments of trouble she has had to work through, including an accident on her trip across the country.

“There was a patch of road just across the Alberta border that was super dangerous, super bad, and there were really high winds, snow drifts that were coming like crosswinds,” she said. “And basically, I lost control and the van spun off the highway and landed in a ditch.”

Collisions aside, weather has been a major challenge for Saydam. No heat in her van, mixed with a small propane-based cooking set that can cause condensation and mould in the van means she has not been cooking home meals as often.

Price-Williams has had his problems too. The van’s transmission failed during his travels. As a precaution, he recommends having an emergency repair budget, because most van dwellers he knows experience vehicle issues at some point.

Parking is also not something Instagram bloggers talk about. Online they show waking up to stunning views of mountains and lakes, when in reality, Saydam said she has spent many nights parked in parking lots or streets.

“Finding places to park is not that difficult, but the reality is, most nights are Walmart or parked on some residential street where you have to get up early in the morning and move,” she said.

As for those cool views you’ll see on Instagram from the influencers, Price-Williams said they are few and far between.

“The spots that you see on the Internet or that are the epic super cool spots, like happens sometimes,” he said. “But a lot of the time it’s just trying to find a spot that no one’s going to get you in shit for parking.”

Saydam doesn’t plan on living like this forever, her next adventure though relies on travel being something we can do again.

“I hope that the world opens up again, and would love to travel to South America, on a motorcycle and pare down even less, just to see because I feel like because I want to work in like low income housing, architecture and design. So I feel like I’m just like, kind of slowly paring it down,” Saydam said.

Price-Williams will be headed back to Ottawa soon and making the shift from part-time to full-time with the start-up. On his return to Ottawa he still plans on living out of his van for the time-being, paying for a parking space downtown.

Saydam said that despite the challenges, she loves the freedom van life offers. As for its other benefits, she’s still working on finding those, but she is determined to keep going until she does.

“The main thing that’s pushing me through is just like an internal battle to do it, and not really be a failure,” she said. “Because if I set out on this mission … I’d feel like I’m failing myself if I didn’t give it 100 per cent or push through.”

Price-Williams and Saydam, even with the headaches, the work, the money, and the pandemic, both say this lifestyle is worth it.

“Yeah, it’s all not just sunshine and rainbows,” Price-Williams said, “[But] this is awesome, so worth all the headaches.”

In The News: Wednesday, March 10