4 days ago 0 6 min read
We use cookies to provide a personalized experience for our users. By continuing to browse this site, you give consent for cookies to be used.
Got it!
Home > Arts & Culture > Video Games > Roll With It: The digital future of Dungeons and Dragons in a post-COVID universe 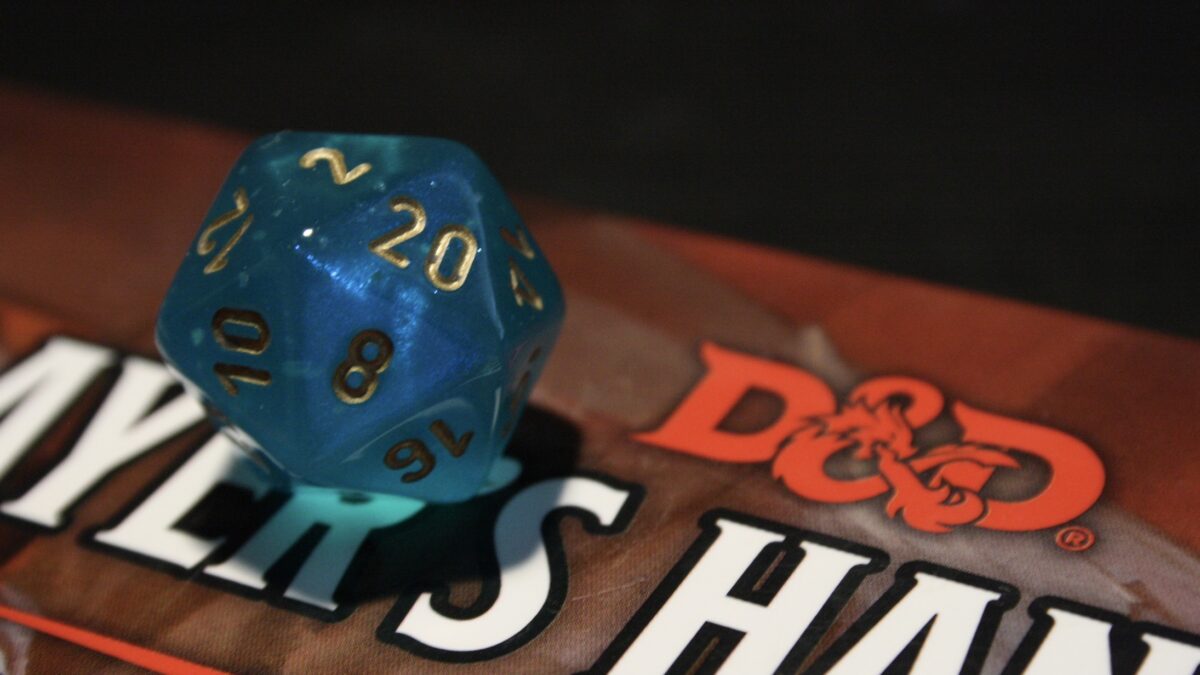 The number of people playing digital versions of the classic tabletop board game Dungeons & Dragons soared during the pandemic. Sales of digital tools used to play D&D online, such as Roll20, also spiked during the global public health crisis. [Photo © David Greenwood]
Business

You and your friends are skulking through the dark corridors of a long-forgotten castle, with only torchlight to guide you. You hear the scurrying of rats and the echo of cultists chanting from the passageway ahead. Your companions draw their weapons, itching for a fight. You rush into the next room to take the enemy by surprise, when suddenly everything dims.

“Battery level critical,” a popup notification flashes. You were so immersed in this gripping tale that you forgot to plug in your laptop. You scramble through your drawers, looking for the charging cable.

You return to your companions shortly after. The sounds of a dark corridor have been replaced with upbeat battle music. On an animated digital map, three cultists wielding daggers are poised to attack. Digital dice are strewn about the screen. And all the while, your friends are making jokes on video chat about your technical mishap.

Throughout the pandemic, players of the tabletop roleplaying game, Dungeons and Dragons, have become familiar with scenes like this one, as global lockdowns forced in-person games online.

In fact, for many people, D&D became a way to pass time during lengthy periods of social distancing. Wizards of the Coast, D&D’s parent company, saw an explosive 24-per-cent increase in sales revenue in 2020, according to CNBC.

Sales of digital tools used to play D&D online also soared during the pandemic. Roll20, one of the most popular tabletop applications, saw a triple-digit increase in the number of users from March 2020 to March 2022, according to COO Corey Rosemond.

Despite the added incentive for online play during the pandemic, however, many players find something is lost in the transition to online D&D. In a 2021 study on D&D fans’ preferred play styles by Prof. Paul Scriven of the Royal Melbourne Institute of Technology (RMIT University) in Australia, only 18 per cent of players said they preferred online. The rest responded it was better than nothing or actively disliked it.

On the other hand, “there are a lot of established communities who just play online,” and some people in those groups “were saying, ‘I don’t like playing face-to-face,’” he said by videoconference.

As we emerge from pandemic lockdowns, will the ease and convenience of slaying monsters through a computer screen supplant the joys of dungeon-crawling with friends seated around a table?

Players who enjoy online D&D like the accessibility of virtual gaming, as well as enhancements such as automated systems and digital-only features, according to Scriven’s study, which analyzed more than 1,000 Reddit posts to determine player attitudes. Players in the study said they liked the convenience of online play, which allowed participants to meet more consistently, as well as game automation.

These findings are echoed in research by Joanna Liu. In 2020, she launched D&DResearch, a project that studies how D&D is played with new digital technologies. She’s also the CEO of Cartographr Technologies Inc., a New York City-based company behind an augmented-reality app for tabletop gaming.

The pandemic drove thousands of D&D enthusiasts online, she said: more than 90 per cent of players D&DResearch surveyed in 2020 said they had played online, compared with just over half in 2019.

And they liked what they found, she said.

“I think people are really welcoming technology. That’s a surprising element for me during the three years of research,” Liu said. “There’s a lot of people that saw the convenience of play online. They’re going to hold on to the skill.”

Virtual tabletop apps are especially popular. These include the usual staples of online and offline play, such as two-dimensional maps and tokens or miniatures to represent characters.

But they also offer features in-person tables can’t replicate. For example, Roll20 features comprehensive inline rules compendiums and character sheets for D&D, in partnership with Wizards of the Coast. Instead of opening resources in separate tabs or windows, players can access information instantly by clicking on a character’s avatar on the virtual tabletop.

Other programs feature even more attractive bells and whistles, such as a virtual reality experience with Berserk Games’ tabletop simulator, which lets players interact in a 3D tabletop environment.

Storytelling is still at the heart of digital gaming technology such as Roll20, said the company’s Rosemond in a Google Meet interview.

“Roleplaying games have been around for thousands of years,” he said. “We do have these digital tools, and how can we use those to, at the end of the day, bring people back together?”

Rosemond said he doesn’t think digital experiences can or should replace in-person games, though. Rather, they’re about providing a unique experience that can’t be replicated anywhere else.

“It’s about enabling the features that bring that content to life and truly create experiences that complement what you can do in-person. But more importantly, it’s allowing the technology to enable you to do things that, for whatever reason, you can’t do in-person, and to do it in a different way.”

Many players will tell you, however, that online play is still inferior to in-person gaming.

Alex Dolansky-Overland is one of those players. A third-year Carleton University student with a passion for writing and improv, he’s every bit the average young D&D enthusiast. And like so many others, when COVID-19 hit, he decided to take his in-person games online.

There were things for him to like about online play. Dolansky-Overland learned how to create digital maps with Roll20 and access some of its more advanced features.

But at the end of the day, it just wasn’t the same.

“You know, at least for me, nothing really beats playing in person,” he said. Certain storytelling techniques, such as pulling players aside for secret one-on-one conversations, are difficult in online spaces, he noted. He also said that the social atmosphere is diminished, because players have to be careful not to talk over one another when on Zoom.

Loss of those social connections is a common complaint. A 2021 qualitative study by Wilmer Tjernberg of the University of Skövde in Sweden looked at players’ experiences with online tabletop game play. Nearly all participants identified the social aspect of D&D as critical to their enjoyment of in-person gaming.

That missing social element is of particular interest for Scriven at RMIT. He sees parallels between the social bonds created by D&D when played in-person, and his previous research into popular video games such as World of Warcraft. This research found the social bonds are sometimes the main reason people play such games, not the challenge of the games themselves.

“There’s perhaps some parallels to … games like World of Warcraft,” he said. “The motivation to play … isn’t for the sake of playing the game. It’s for the sake of… doing stuff with other people…”

With players still weighing the advantages and disadvantages of online and in-person play, some entrepreneurs and industry experts are trying to hybridize the D&D experience by combining digital tools with in-person sessions, or to create new forms of entertainment.

One entrepreneur seeking to revolutionize RPG entertainment is David Carpenter. A veteran of the live entertainment industry, with producer credits on Broadway shows such as Slava’s Snowshow, Carpenter is the CEO of the U.S.-based Gamiotics Inc., which has developed a digital interface that enables audiences to engage with live entertainment through a smart device’s web browser.

Gamiotics powers The Twenty-Sided Tavern, a live show that combines the swashbuckling adventure and comedic roleplay of your typical D&D game with real-time audience decision-making. Live performers roleplay, while the in-person audience uses their phones to influence the show’s story through the Gamiotics interface. Since the audience helps determine how the adventure unfolds, no two shows are the same.

The show is also an evolving story: each event is a new adventure in the show’s story world. That means that an audience member who caught the show’s debut performance in Philadelphia last year could see a new adventure, but in the same world, at the show’s official World Premiere, which took place in April 2022 in Pittsburgh.

“What I’m already seeing on Twenty-Sided Tavern, is that we’re providing a place for a community of people to come together and celebrate the thing that they love,” Carpenter said. Audience members get to express “their love of gaming in a live space, in a room with other people.”

Researchers say this sense of community is a key factor in D&D’s popularity, which has been on the rise over the past decade, after a long period in which the game was stigmatized for its dark themes and fantasy violence.

The game has undergone a resurgence, thanks in part to popular online shows that have improved the game’s image, according to a 2020 study by Premeet Sidhu and Prof. Marcus Carter of the University of Sydney in Australia. In their research, they point to the impact of shows such as Critical Role, a popular web series in which professional voice actors play D&D.

Some entrepreneurs are blending home games with digital tools in new ways. Using the data gleaned from D&D Research, Liu saw a future for D&D in augmented-reality technology and began developing Cartographr, a phone app that situates AR monsters and environments on the everyday tabletop.

“The cool thing about Cartographr is it’s meant not to completely replace pen-and-pencil play, but enhance it,” Liu said. The app uses the phone’s camera to scan the environment for two-dimensional planes, such as a tabletop. A 3D model, such as a monster, then appears on the phone screen, automatically adjusted for data like size, orientation, and distance.

As lockdowns begin to lift around the world, D&D players are beginning to return to in-person games, and all the spell-casting, roleplaying, and dice-rolling that entails. But many are not planning to ditch the digital tools they began experimenting with during the pandemic.

Dolanksy-Overland said he’ll continue to use Roll20, even when his games go back to being in-person.

“I like that Roll20 lets you create maps. It sort of lets me do more: it lets me convey the space of the players by supplementing what I’m actually using to describe the scene,” he said.

Rosemond said the digital tools and other enhancements players discovered online during the pandemic era will have a lasting impact.

“To me, where online will play such a pivotal role is helping people experience something in tabletop that they can’t in physical-only play,” Rosemond said, adding that he is excited about the future of D&D and other role-playing games.

“This is a real watershed moment in tabletop role-playing gaming.”