4 days ago 0 4 min read
We use cookies to provide a personalized experience for our users. By continuing to browse this site, you give consent for cookies to be used.
Got it!
Home > Coping with COVID 2021 > Rolling with it: Ottawa’s Dungeons and Dragons community thriving online 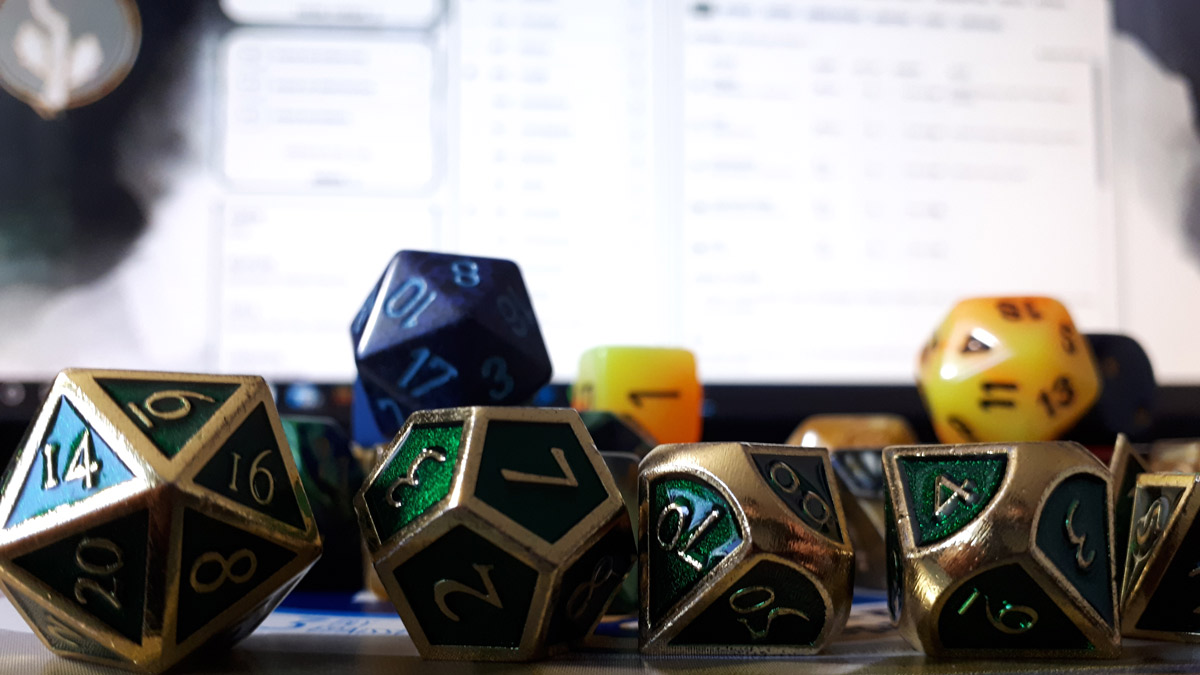 A dungeon master’s collection of dice used in popular role-playing games. The pandemic has sparked a major upsurge in the popularity of Dungeons and Dragons. [Photo © Leif Growen.]
Arts & Culture

You blow on the dice in your hand and pray: one missed roll and this could very well be the end of you. The dice rattle across the table as your heart beats faster. Then an outburst of excited shouting, the defeat of a strong foe and a strengthening bond with your peers over the tabletop. How could this moment possibly be replicated online?

Despite the pandemic’s impact on in-person activities, U.S.-based game maker Hasbro has reported a 33 per cent increase in sales of Dungeons and Dragons, adding to the classic tabletop roleplaying game’s six-year growth streak.

By all accounts, the atmosphere of tabletop role-playing games (TTRPGs) is tense and exciting. And, despite the in-person nature of the game in normal circumstances, players in Ottawa see D&D’s successful move from the tabletop to the laptop as no surprise.

Mike Hopkins, owner-operator of The Loft Board Game Lounge in Ottawa, said he’s witnessed the remarkable success of Dungeons and Dragons in his own business. He has observed that it’s better suited to online adaptation than other strategy games.

“Most of Dungeons and Dragons is played just sitting around a table, looking at the other players and referencing a sheet, which you can do through these apps,” he said. “It’s a fantastic way to go on a Zoom call, still see everybody, and interact with them on a personal level, which is what role-playing games really excel at.”

Hopkins said he was not surprised at the game’s continued relevance. He recalled how much energy the game would bring into The Loft in pre-COVID times and said staff often had to isolate boisterous players to avoid disturbing other customers.

Hopkins added: “If I had a prediction back in March of 2020 of what game would get very popular, … Dungeons and Dragons would have been a good bet.”

“People have been playing it online since the beginning. They used to have e-mail games, and even play-by-snail-mail games,” Carkner said.

“I know in the context of a 20,000-person student body that sounds kind of small, but I have seen other clubs, like a music club, have a significantly smaller following,” said Carkner.

Together with co-leader, Max Besner, the club has been hosting Dungeons and Dragons sessions since late-2019 for new and experienced players alike. Carkner says in Monday-night casual sessions, the first hour is dedicated to asking questions and teaching new players.

Despite the non-stop growth of the game, not all who are interested have been able to play. In the past year, Luisa Werneck, a third-year biology student at Carleton University, has been attracted to Dungeons and Dragons thanks to streamers who broadcast their playing online. However, she said she felt there is a social stigma around playing the game, making it more difficult for her to gather a party.

“Even though (shows) like Stranger Things and Critical Role gave a lot of people more knowledge towards the game, and I feel like the judgment is a little bit smaller, there’s still some judgment around it, which makes it even harder to find people to play,” said Werneck.

As well, Werneck says because she discovered her interest during the pandemic, it feels harder to find a way to play.

“I know there are a lot of (virtual) programs that are supported and can help playing a lot, but it’s not the same feel of playing it in person with people around a table,” she said.

Carkner agreed. He said he believes it’s harder to respond to social cues when you are reacting to a “camera showing you the person.”

“In my opinion, if there was a tier list of preferred formats, online play would be at the absolute bottom,” Carkner said. “You lose a certain quality of interacting with human beings over the internet.”

Hopkins agreed that an element of Dungeons and Dragons is lost when hosted online and he said he believes those who played their favourite tabletop game in The Loft will be back soon after the pandemic is over.

“I think players really like to roll dice in front of other people. I think they like to look at 3D models of their characters,” said Hopkins. “They like sitting around a table, having a drink or some food or just shooting the shit with the other players.”