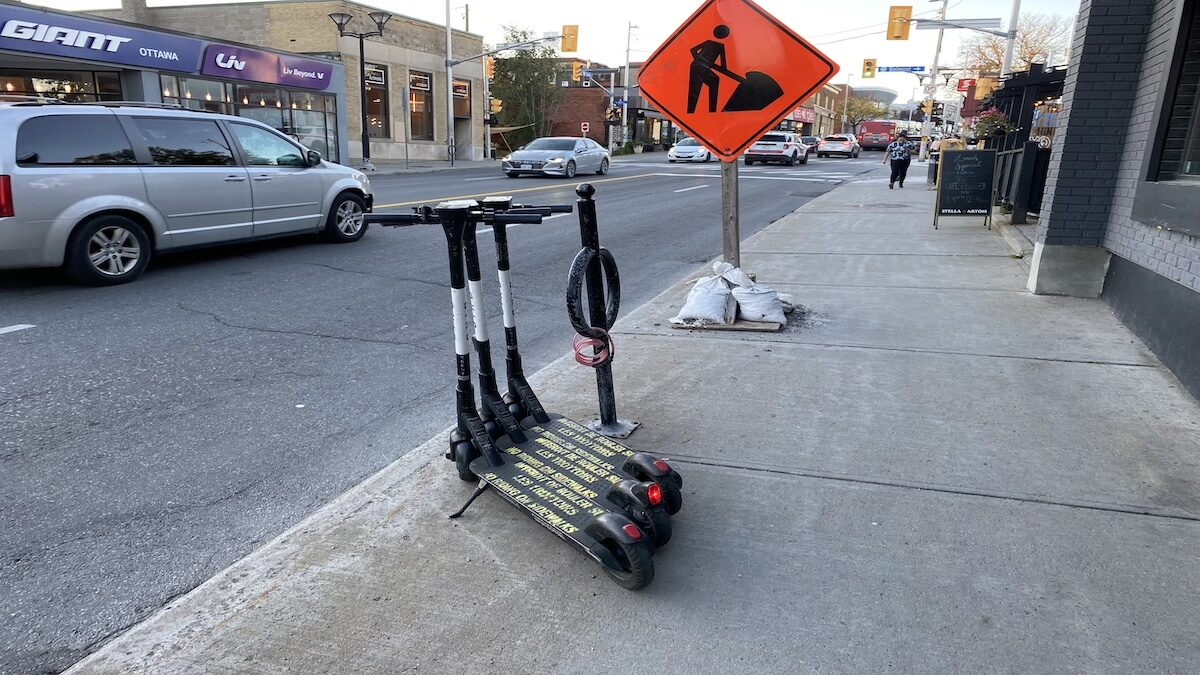 These e-scooters from Bird are properly parked in the furniture zone of the sidewalk along Bank Street in Old Ottawa South. [Photo © Sarah Malina]
Community

The impact of e-scooters on sidewalk accessibility has been a source of frustration for Ottawa residents during the city’s 2021 e-scooter pilot program. People have been concerned about the increase in sidewalk obstructions caused by e-scooter users.

“It’s a maze, it literally is,” said Ryan Lythall, who uses a wheelchair.

Lythall said he has had his path on a sidewalk impeded by e-scooters many times during the pilot program. This past summer, for example, he had a run-in with two teens riding on an e-scooter down the sidewalk.

“They pulled over to try to give me room, but I ran into a pole. There was simply no room for me to get by,” he said.

Lythall says people with mobility concerns (such as physical disabilities and visual impairments) can have a harder time navigating sidewalks at the best of times and e-scooters bring an increased risk of collisions and obstruction when ridden or misparked on sidewalks.

People have shared their concerns on social media. Twitter has been full of photos of misparked scooters blocking sidewalks and expressions of frustration about having to move scooters out of the way — something that people with disabilities or limited mobility, like Lythall, might not be able to do on their own.

The city promised in its announcement of the pilot that there would be a focus on reducing sidewalk riding and improper parking.

Willem Klumpenhouwer, a transportation researcher and postdoctoral fellow at the University of Toronto, said that pilot programs often see issues such as these.

“There’s a lot of testing out what works and what doesn’t. Hopefully, the City has access to the data, has access to certain measures of how these things are doing and then can react to that, and make sure companies are trying to find ways to improve.”

Austin Spademan, the assistant general manager at Bird Canada, says the data the company collects on e-scooter rides in the city suggests that Twitter complaints don’t represent the reality on the ground.

A press release that Neuron Mobility shared with Capital Current on Oct. 21, included data from a recent rider survey the firm conducted in Ottawa. According to the findings of the survey, 82 per cent of riders believe e-scooters have had a positive impact in the community. It should be noted that this finding is specific to the e-scooter riders and not the general Ottawa community. No data was shared on misparked scooters.

Spademan said there are kinks to work out. E-scooters are a new technology in Ottawa. He said that Bird is working directly with people with disabilities to whom these accessibility concerns directly apply. Bird Canada has been working with the Canadian National Institute for the Blind and the Canadian Council for the Blind. Lythall, among others, was an early stakeholder consulted by Spademan and Bird Canada.

“Those are the people I’m listening to,” said Spademan.

The city, which shares the right way to park an e-scooter on social media, says proper e-scooter parking is in what is called the sidewalk furniture zone, which is “the area closest to the curb in line with trees, benches and bike racks and out of the way of pedestrian travel.” But, not all city sidewalks have such zones. Ottawa has also created the “Electric Kick-Scooter Bylaw” to regulate and enforce proper scooter use. Offenders are liable for a substantial fine.

Bird Canada has set up an email created initially for people with disabilities based on feedback from the Canadian Council for the Blind (311_ottawa@birdcanada.co). Messages go directly to the phones of Spademan and his operations team, allowing them to get to a site faster to move misparked e-scooters.

Neuron Mobility and Bird Canada are testing e-scooters with noise-emission technology to better alert pedestrians, particularly those with vision impairments, that an e-scooter is approaching. Neuron Mobility has also introduced braille identifiers and raised lettering on their e-scooters to help vision-impaired pedestrians to identify and report misparked e-scooters, and

Bird Canada is also piloting a new model of e-scooters would prevent operation of the devices on sidewalks.

“Since we’ve implemented this program at Lansdowne, [we’ve had] zero cases of a scooter being parked outside of the digital coral,” said Spademan.

Gwen McGuire, Neuron Mobility’s senior communications leader, said Neuron will be making an “exciting safety-focused innovation announcement” in a couple weeks. That timing is aligned with the end of the 2021 e-scooter pilot, which is set to finish at the end of the month.

Lime did not respond to Capital Current’s inquiry on the measures they are taking to alleviate sidewalk accessibility issues.

Klumpenhouwer thinks that the root of the issue lies more so in Ottawa’s lack of infrastructure for active transportation, such as parking options and bike lanes.

“My worry is that people will label the whole project as a big mistake when a lot of the problems that we’re seeing with scooters are because there’s not the right kind of infrastructure.”

Klumpenhouwer said he thinks if the proper infrastructure is provided people will use it, decreasing the obstructions to sidewalks and improve accessibility for people with disabilities and limited mobility.

“People are more inclined to park in a spot if it’s available and convenient. … So I think if you provide a little more of the infrastructure people will start to park them in better spots.”

Spademan, who is also a biker, agrees better infrastructure is necessary, and suggests that e-scooters are a good business case for more bike lanes in the city.

“Being in this job, I can actually make compelling data-driven arguments to the city. … We’ve now got a bunch of new people in the active mobility space and we’ve got the data to back it up to be like, ‘hey, you need a bike lane right here, or you need e-scooter parking on this street.”

Despite this, Lythall said he believes there are still too many irresponsible users for the e-scooter initiative to be worthwhile. He wants the city to end the program, as is the case in Toronto.