2 days ago 0 4 min read
We use cookies to provide a personalized experience for our users. By continuing to browse this site, you give consent for cookies to be used.
Got it!
Home > News > Transit > Study underlines that air pollution a leading cause of premature death worldwide 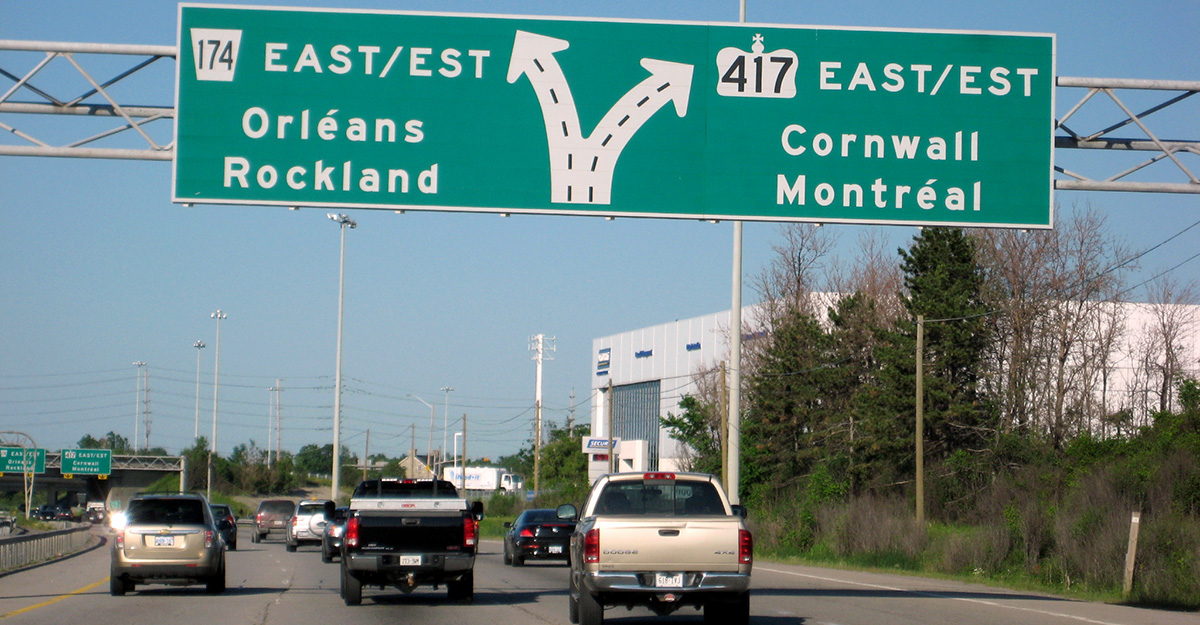 A City of Ottawa study found the highest concentrations of nitrogen dioxide at the split of Highway 417 & Regional Road 174. [Photo courtesy bobbsled of Flickr]
Canada

By Elyse Robinson and Lauren Stokes, 2 years ago 0 3 min read

Air pollution is the leading cause of premature death and is shortening average life expectancy internationally by an average of 2.9 years, a recent study from the University Medical Centre in Germany has concluded. And while Ottawa tends to have relatively good air quality, researchers warn against complacency.

“We understand [air pollution] as a leading cause of climate change, but we don’t always think of it as a major threat to health,” said University of Ottawa biology professor Jules Blais, who studies the consequences of environmental pollutants on natural systems.

By comparison, it is estimated that in 2015, smoking tobacco killed 7.2 million people, HIV/AIDS killed one million, parasitic diseases killed 600,000 and violence (including deaths in wars) killed 530,000 people.

Blais said the health effects of air pollution are difficult to study because it’s hard to pinpoint their exact cause.

“We don’t think of cause of death as being long-term exposure to common air, we talk about people dying of cancer or old age and it’s hard to attribute to something,” Blais said. “Because air pollution is so familiar, we don’t think of it as the threat it is.”

The Ontario Air Quality Health Index is an online service that monitors pollution in Ontario municipalities. It measures levels of pollution from low risk (1-3) to very high risk (10+) with an online graph and forecast. Downtown Ottawa usually sits at low risk (1, 2 or 3) but occasionally spikes to moderate risk (4), as it did several times in 2019.

A City of Ottawa study released in 2009 found that on days with poorer air quality, pollution from as far as Montreal and from the Ohio Valley in the U.S. were factors. However, the report also found that the highest concentrations of nitrogen dioxide, one of the ‘pollutants of concern,’ were are found at the split of Highway 417 and Regional Road 174 and at major interchanges to the 417.

“People who smoke for their whole lifetimes may lose four years of their life. To put that change of life expectancy into context, one year is a pretty big impact,” he said.

Villeneuve said governments at all levels play an important role in reducing pollution and Ottawa is no exception. He said light rail transportation is a good place to start.

“If we’re interested in reducing long-term impacts, we need governments and constituencies to come together,” Villeneuve said. “That means that everybody’s air pollution [intake] is going to be reduced and that’s going to be the final benefit.”

“There will have to be large scale changes to the way we do things … and we’re going to have to create the political will to shift things that way,” Blais said.

The study says if fossil fuel use is phased out in North America, over a year could be added back to overall life expectancy. In East Asia, three years of loss in life expectancy could be regained.

“Five and a half million deaths worldwide a year are potentially avoidable,” said Thomas Munzel, a professor and researcher involved in the study.

In the News: Monday March 30