6 days ago 0 5 min read
We use cookies to provide a personalized experience for our users. By continuing to browse this site, you give consent for cookies to be used.
Got it!
Home > Politics > Canada Votes 2019 > The Bigger Picture > The elusive narrative in Election 2019 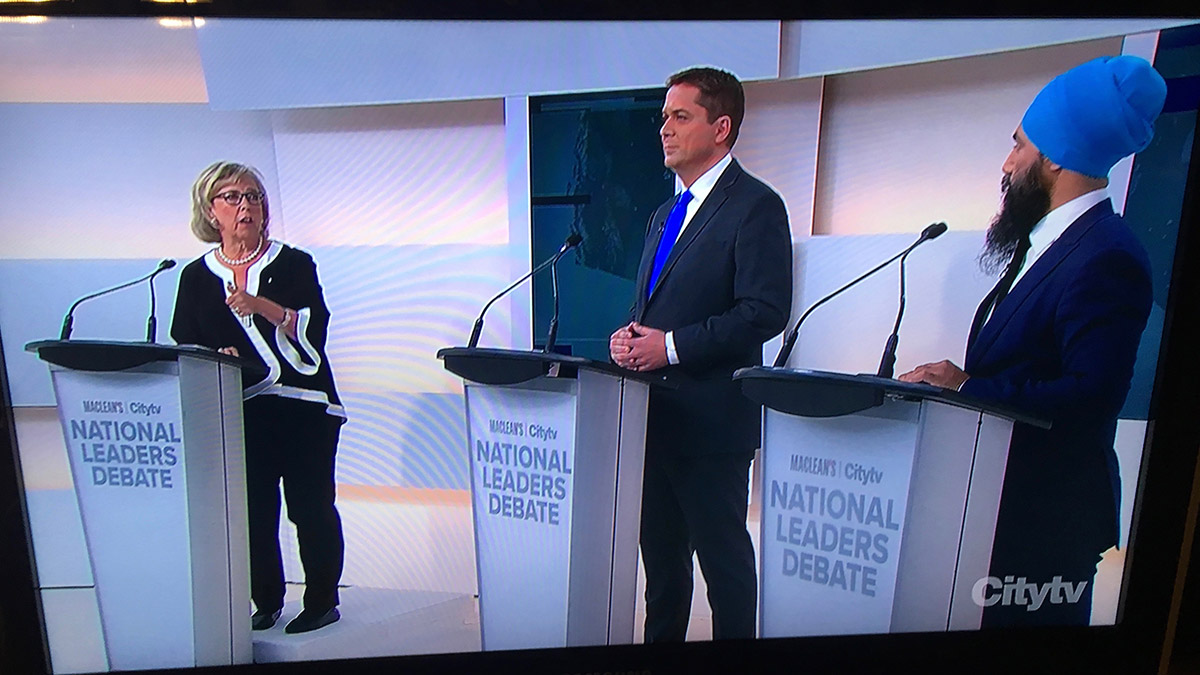 The performance of the three leaders in the Maclean's debate shaped the initial media narratives around their campaigns. [Photo © Christopher Waddell]
The Bigger Picture

In the current media world, as so many critics have said, the interesting often crowds out the important.

Current media culture favours story telling as its primary vehicle for organizing and delivering information. It tries to create story arcs to situate facts, events and personalities within compelling dramatic narratives to make them more understandable and attractive to news consumers, an overwhelming requirement in the existential struggle for survival among journalistic organizations. To be an acknowledged expert storyteller is more prized than to be an expert dogged reporter.

In an election, there is little argument about the importance of democratic choice. The challenge for media is how to make that interesting and compelling because they do not think its intrinsic importance is sufficient to generate the level of consumer interest they require.

Media approaches that task in predictable ways. It favours “news” (and its implied immediacy and urgency) despite elections being more about repetitive and incremental exposition of policy and promise by the candidates and their parties. Hence the focus on trying to force errors or establish absolutes in a world of complexity and ambiguity. The constant reporting of “bozo eruptions” despite their routine quick resolution and often irrelevance to formal party positioning is another news staple.

The more significant strategy though is the imposition of media narrative to frame the exercise and imbue it with compelling features to generate interest. In recent Canadian elections, that media narrative has two dominant components —  the state of the competition (the horserace) and as has been true since the days of Greek drama, the story arcs that characterize the personalities who are the leading actors in the overall drama.

This election, media have not had to work very hard to find one of the main narratives. Polling has established that currently the outcome is too close to call and may not even produce a clear result. It has legitimized that most prized story line: the horserace or sports event with all of the opportunity that creates for focusing on strategy, performance and momentum.  And in a two for one special, there isn’t just the race for first, there is the race for third between the NDP and the Greens.

The Maclean’s debate media analysis was as much or more about that race as it was about the performance of the one candidate (given Mr, Trudeau’s absence) with a legitimate chance to become the Prime Minister. And to the delight of many of those weaving the fight for third narrative, Mr. Singh appeared ready to challenge the prevailing assumptions of his unreadiness and the NDP’s weakening prospects, keeping this storyline alive and well.

As Week One ends, the attempts by leaders and parties to frame their ballot questions and policy announcements have taken a decided back seat to horserace handicapping.

What hasn’t yet solidified is the other leg of the media narrative stool – the story lines defining the leaders, although some are emerging.

In 2015, Mr. Trudeau was the “new politics” insurgent promising an end to the dour Harper years. Obviously, that is well behind him now. His efforts to have the electorate look ahead have been blunted by media (and Opposition) insistence on looking back. As the weeks wear on, he might become the hero who overcame significant difficulties to once again be the peoples’ choice of safe hands to take Canada into the future. Or he might represent the classic fall from grace of a leader struggling for redemption and a second chance. Less dramatic and perhaps most likely, would be the simple story of contrast – becoming the default choice among a set of leaders who fail to inspire.

Media has struggled as well in trying to find a consistent way to characterise Mr. Scheer. At this point, the most common framing is that he is quite low key and has yet to define himself or be defined by others. The Liberals have worked hard to portray him as a hidden social conservative with designs on turning back the clock on abortion and same sex marriage. They have also tried hard to link him with Doug Ford and Stephen Harper suggesting he has a hidden agenda to sharply cut back on the role of government and its spending. Media has reported on those themes but thus far at least seems unpersuaded.

Mr. Scheer himself is promoting the narrative that he is the leader who will make life more affordable for Canadians.  Although it is early days and the Conservative platform is yet to come, there are few proof points for that claim and general cynicism about the capacity of government to make a difference create a high bar to its acceptance.

By defining his overall framing that narrowly, Mr. Scheer leaves open the questions about how he would manage the economy in uncertain times and how he would represent Canada on the world stage. Some observed that he looked “prime ministerial” in the debate but also suggested he was defensive on climate change and indigenous issues. Polling results have thus far legitimized Mr. Scheer as a plausible contender for Prime Minister. That will give him and media time to sort out his story arc. Whether he or they can generate excitement about his personality and candidacy is an open question.

Jagmeet Singh’s debate performance has made a difference in media narrative largely because of the inappropriately low expectations of him they held. Although the audience for the debate would have been quite small, the media analysis would have had much wider reach and was quite broad and consistent. The emerging story line for Mr. Singh seems to be the clearest of all at the moment. Pending some significant set back or diminishing poll results, he has become the 2019 election turnaround personality – exceeding expectations, performing well and rejuvenating the NDP’s chances. The feel-good story is being enhanced by his being the first visible minority leader to contest a national election. And of course, all of that preserves the horse race for third story line.

Ms. May’s first week has suggested that she faces a lot of scrutiny and hard assessment as media try to take her measure. She’s been party leader for more than a decade and her media narrative was consistent over time – a deeply committed environmentalist activist who was a straight shooter, unscripted, spontaneous and determined to force accountability on the other parties’ climate change policies. That may be the media base line but the fact that the Greens are more competitive and may hold the balance of power has turned their attention to her policy set, team and set of personal convictions with decidedly mixed results. She has delineated some positions that seem impossible to implement. She has created ambiguity about her party stance on abortion. She has shown a willingness to support any government given enough concessions. And some of her candidates have become controversial. In one short week, media framing of her has shifted to focus on her vulnerabilities not her core proposition.  There is no doubt of her authenticity, fluency and comfort debating. Those may yet surprise people who have not been paying attention and that possibility and the race for third will keep her buoyant for a while.  But the first week has shown she is in danger of being marginalized by media with a narrative of overreach and being not quite ready for prime time.

All of this may seem like a sociological tour of media culture to no apparent purpose. But research has clearly demonstrated that media framing is important to shaping the world for people who are not deeply partisan or ideological. Media cannot tell people what to think – they are more than capable of deciding for themselves. But it does provide clues about what is important for them to think about. And media narratives tend to become conventional wisdoms.