10 hours ago 0 1 min read
We use cookies to provide a personalized experience for our users. By continuing to browse this site, you give consent for cookies to be used.
Got it!
Home > Politics > Canada Votes 2019 > The Bigger Picture > The growing gap between public and media perceptions 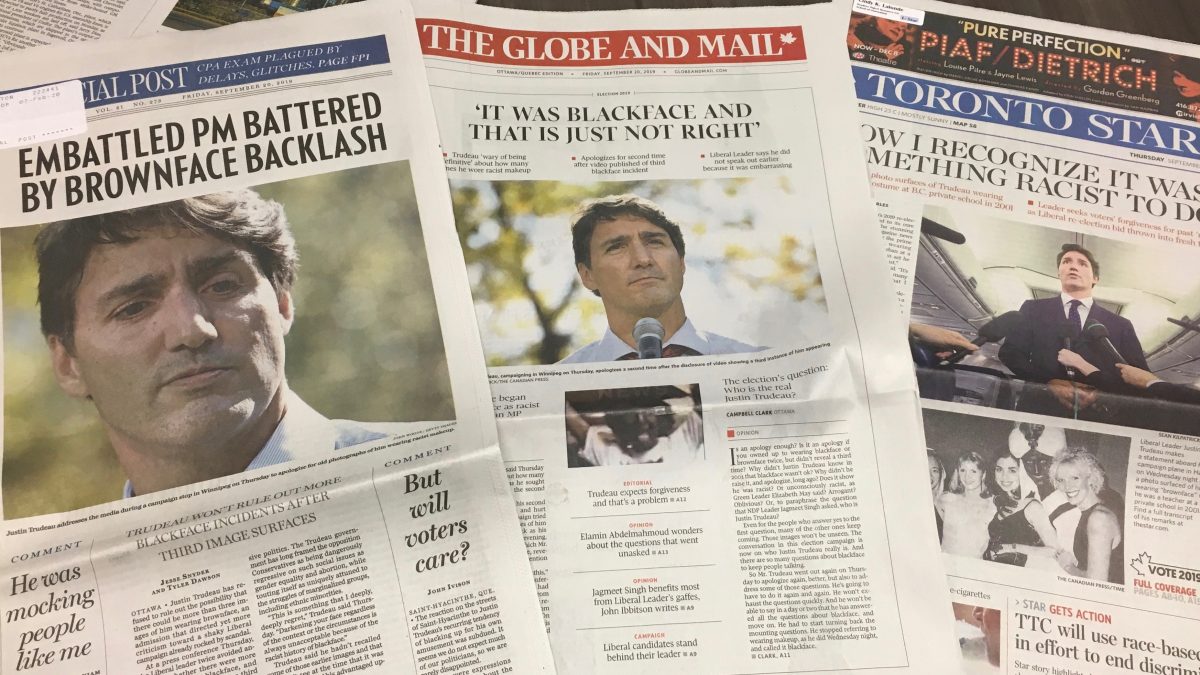 Wall-to-wall coverage of some issues don't match public perceptions of what's important to them. [Photo © Christopher Waddell]
The Bigger Picture

The growing gap between public and media perceptions

Three recent examples in the federal election campaign highlight what appears to be a growing gap between how the public and media perceive issues and what each considers important.

That’s a concern for several reasons.

It suggests media’s traditional role as a marketplace of ideas where issues are debated, thereby helping to shape public opinion, is fading.

It also seems that little has been learned from the US media and campaign experience in 2016 by the Canadian media about the importance of listening to voters as opposed to telling them what to think.

Finally one of the reasons only nine per cent of Canadians say they are willing to pay for news online may be that the news they receive seems so foreign to how they perceive the world. They no longer find it valuable or necessary in helping them with the decisions they make that shape their daily lives.

There’s a common thread between the media fixation and multiple-day coverage of the federal ethics commissioner’s recent report and subsequent suggestions the RCMP may be doing something surrounding Justin Trudeau and the SNC Lavalin issue; Liberal party efforts to drag up Conservative leader Andrew Scheer’s 15-year-old statements about abortion and same-sex marriage; and Justin Trudeau’s 20 and more year old dress-up appearances as Aladdin and Harry Belafonte.

None of that coverage changed public opinion in surveys of Canadians about their political leaders, and in the context of an election, who they will support.

In the days after the Trudeau pictures were published, news organizations went to the streets and found Canadians, including many visible minorities, were disappointed, thought it was stupid and insensitive but they also said it happened 20 years ago and is not going to change what they do on October 21. A media search for public outrage came up empty-handed, yet that didn’t seem to affect coverage. If anything it led to those who were outraged, including those in the media, being outraged that more people weren’t outraged as highlighted by seven pages of coverage in the Globe and Mail on September 20.

The same thing happened when the Liberals highlighted Scheer’s 15 year old comments. There is nothing that suggests whatever he thought then will govern his actions now, a point the public made when asked and Scheer himself said. Polling reflect that view that this wasn’t really relevant as opinions of leaders did not change after several days of coverage.  That was then, this is now. Move on please.

Whatever impact the SNC Lavalin issue had on Canadians was established much earlier in the year and the conflict of interest ruling didn’t change that. Subsequent surveys showed no significant change in perceptions of Trudeau and Andrew Scheer.

When the Reform Party arrived in Ottawa in the mid-1990s there was a small but vocal group within it that could be best described as ‘perma-mad’. They were angry about everything from every decision by the Liberal government to their perceived unfair treatment by the media to cultural and social policies and immigration and everything in between.  Before their feet hit the floor in the morning they were mad, they were angry about everything all day long and the last thing they thought of before falling asleep at night was how mad they were.

It was incongruous largely because it lacked perspective. Not everything is a 10-alarm fire. When everything is, then very quickly nothing is.  Others in the party moved the ‘perma-mad’ crowd to the fringe, where they would erupt on occasion attracting attention. But the mainstream of the Reform party assessed political issues on their individual merits with a degree of perspective the ‘perma-mad’ gang never had.

An ironic legacy of the Reform Party, which always claimed that the media was Liberal and part of the establishment and therefore part of the problem in Canada, is that it’s now much of the media that seems ‘perma-mad’, where everything is that 10-alarm fire.

It is egged on by the cesspool of social media that captivates journalists even as the general public pays little attention, by those who are either paid to be permanently outraged or may have adopted it as a lifestyle and perhaps by the media’s increasing frustration at its marginalization in the eyes of the public. The result is campaign coverage that increasingly lacks perspective.

That also makes the coverage as incongruous to most of the audience as the ‘perma-mad’ Reformers were 25 years ago.

Canadians bring perspective to bear every day on the large and small decisions they make in their lives and families. Some things are more important than others. A few things may change minds. Others are interesting and others are just trivial. There are not many Canadians who don’t regret some things they did in their past. The skill is in differentiating what is consequential from what is not.

The media has traditionally played a valuable role in helping its audience sort out the consequential from the inconsequential or less consequential. The media makes that argument in positioning itself as an essential pillar of democracy.

Allowing that to slip away when its economic future is threatened and audiences are already disappearing, seems both shortsighted and a self-inflicted marginalization when the media can least afford it.

Christopher Waddell is a Professor in the School of Journalism and Communication at Carleton University, a former CBC Parliamentary Bureau Chief, executive producer of news specials for the CBC and Globe and Mail Ottawa bureau chief.