6 days ago 0 5 min read
We use cookies to provide a personalized experience for our users. By continuing to browse this site, you give consent for cookies to be used.
Got it!
Home > Sports > There be Dragons: The weather smiled on the World Ice Dragon Boat Championships in Ottawa 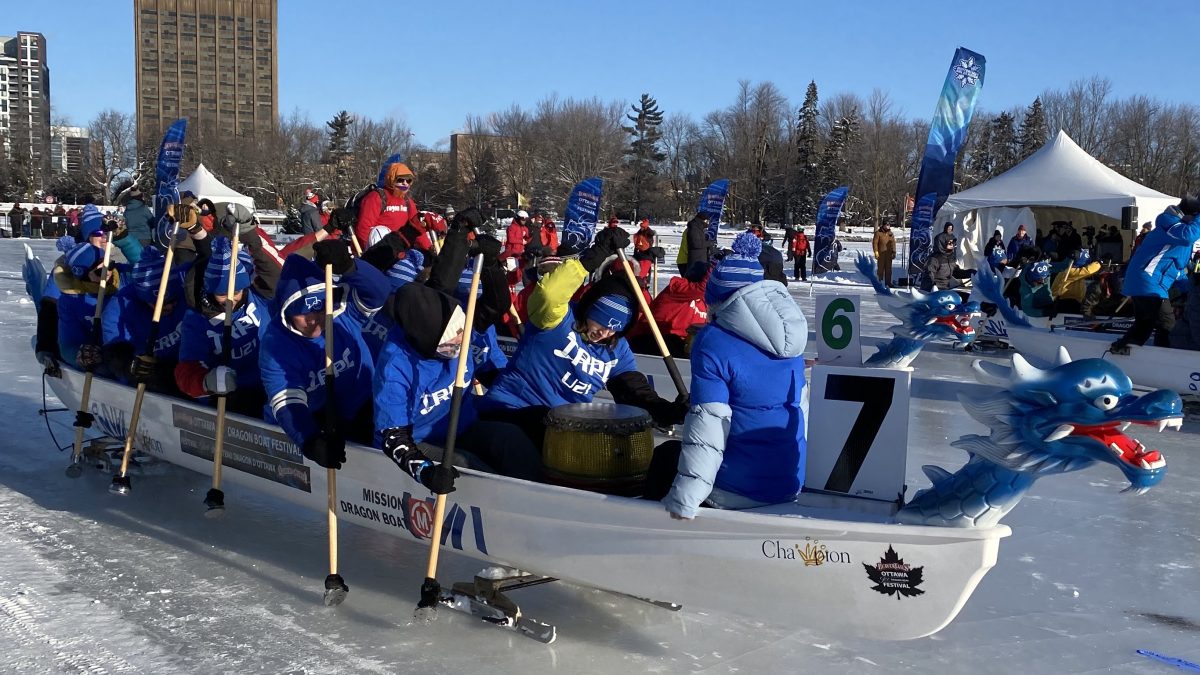 Crews were on their mark during the IIDBF World Ice Dragon Boat Championships held on the Rideau Canal Skateway during Winterlude. [Photo © Camryn Patterson]
Community

The wrath of a Canadian winter was in full blast on Dow’s Lake when the crews picked and grunted their way down the Rideau Canal Skateway in -29-degree weather. Almost every one of the dragon boat teams finished the 200-meter race in under two minutes. For Antony Cooper, Director of Operations for the Ottawa Dragon Boat Foundation, this was the kind of weather he was hoping for during the event.

Elizabeth Wasson, 61, from New Jersey, was bundled in six layers of clothing and her Team USA jacket. “My sister convinced me to do it, I’m never listening to her ever again,” she said standing with her team, the Scallowags, as they waited their turn. She wasn’t expecting the weather to be as cold as it was.

The first world championships were held in Mongolia in 2017 and featured more than 300 athletes from 23 countries. This year Canada hosted for the first time. It was held on a strip near the Dow’s Lake Pavilion on the Rideau Canal Skateway.

Cooper said the decision on where to hold the world championships is based on where the sport is having success around the world.

Ottawa’s annual festival has been a “massive success” each year it’s been held, Cooper said.

This year’s competition sold out two days after registration opened in October. “It’s about 1,200 competitors and then people bring their families and friends,” Cooper said. It’s a big event for a lot of the competitors, especially for the 62 per cent that come from outside of Canada, he said.

Registering as a team for the championships cost $750 and registering as an individual was $75. Donations and the money made during the event went to the Ottawa Dragon Boat Foundation, who raises funds for charitable organizations.

At the championships, the Ottawa Dragon Boat Foundation had “Shiver and Giver” races where those who competed and raised the most funds won a reservation and meal at Dow’s Lake Pavilion. The winners in the other divisions won the chance to be named an international champion aka bragging rights.

Athletes from around the world registered. There were teams from India, England, Japan, New Zealand, Ireland, Australia, the United States and Canada.

Ottawa’s Richard Martin, 59, participated in the championships this year after doing the Ottawa Ice Dragon Boat Festival in the previous years.

“We come here because of the people,” Martin said, “the competition is secondary to coming out here and raising money for great charities with good friends.” Martin and his team, the Chinatown Snowboat, said Dragon Boat racing is a big part of their lives.

“There’s amazing people that are really about community and wanting to donate to the community,” he said.

This year hasn’t been the best for the skateway because of the fluctuating weather. Some days it’s freezing and other days it’s above zero – leading to relatively poor ice conditions.

Corey Larocque, a strategic communications advisor for the National Capital Commission, said it’s their job to make sure as much of the skateway is open for as long as possible.

With big events like this, the National Capital Commission hopes the organizers have plans in case the ice isn’t safe. Cooper said the fallback date for the race was Sunday, but in reality, it probably would have been cancelled if it hadn’t gone ahead on Saturday since so many competitors from out of town already had travel plans.

Cooper is confident that the championships will be held in Ottawa again because of the great partnerships in place and the Ice Dragon Boat Festival’s success rate.

“[Ice Dragon Boat racing] is spreading and growing worldwide,” he said, “it helps us attract everybody to the Nation’s Capital.”