3 days ago 0 4 min read
We use cookies to provide a personalized experience for our users. By continuing to browse this site, you give consent for cookies to be used.
Got it!
Home > News > Ottawa > They came, they SAW and they are conquering: Gallery renovations have changed artist-run organization 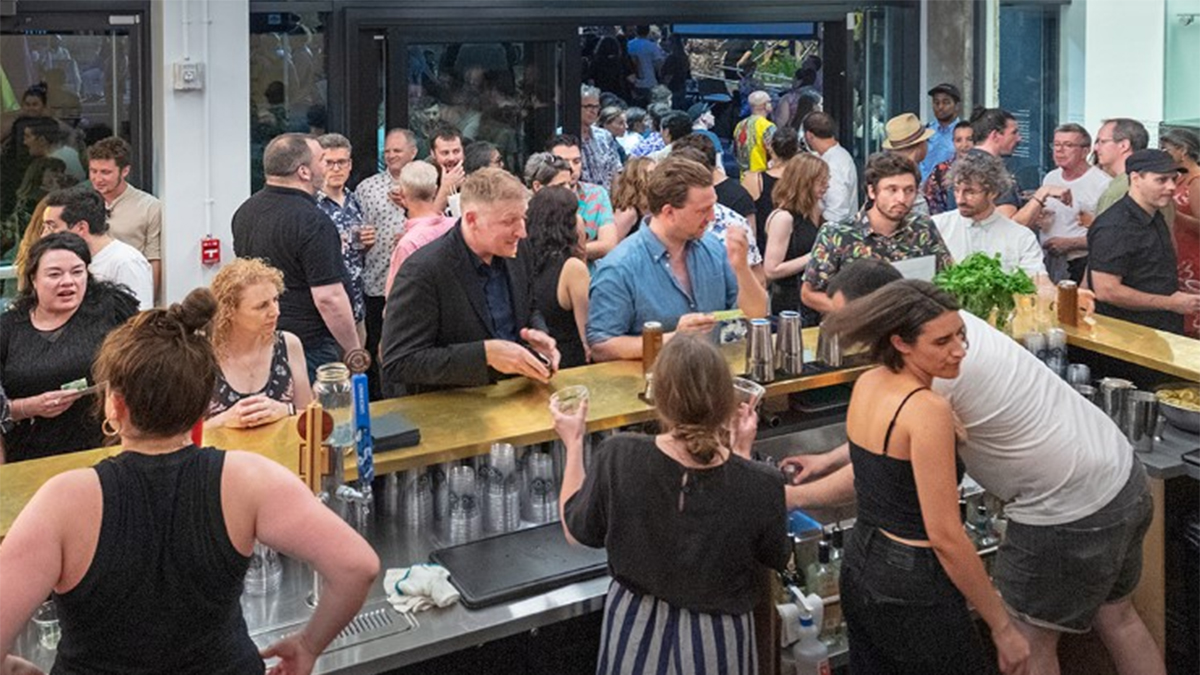 Before COVID-19 closed the facility, the renovated Club SAW was a much busier place. [Photo provided by SAW Gallery]
Arts & Culture

They came, they SAW and they are conquering: Gallery renovations have changed artist-run organization

The artist-run SAW Gallery and Club SAW have been seeing the benefits of a major renovation to Arts Court and their own facilities.

Before COVID-19 closed the space, the organization had been accommodating events and exhibitions on a scale that they couldn’t have done before. And the gallery is now in the process of developing what is being called the Nordic Lab, which will open up new avenues to help artists in Ottawa and beyond.

In a good year the gallery would draw about 38,000 people to exhibitions and events and before the pandemic hit, was having visions of reaching 55,000 this year.

SAW Gallery Curator Jason St-Laurent says, “the renovations have allowed us to turn SAW into a more state of the art centre.”

The old SAW, had more of an “underground feel” says director Tam-Ca Vo-Van.

“The addition of the courtyard was a major improvement that changed the atmosphere of SAW. It has created a free flow between the outside and the inside for events, which has, “impacted the quality of the experience for visitors,” according to Vo-Van. It served as a festival hub over the summer, she said, hosting notable events such as the Ottawa International Animation Festival on a scale that was not possible before.

Vo-Van says the added space has allowed larger attendance at art events. “We would sometimes have 350 people show up at our old space, when the gallery and the club combined could only accommodate 150 people,” says Vo-Van. The capacity now can hold just under 300 people standing, plus an additional 200 with the outdoor courtyard.

Although they are not able to disclose exact figures yet, Club SAW Co-ordinator Alex Noreau, says that the club’s profits have “doubled” since the renovations, and “Where we were able to accommodate around 150 events per year, we are expecting to more than double our numbers.”

St-Laurent believes the new facilities have allowed SAW’s exhibition program and events to become more ambitious. “Just from a professional standpoint, the standards went up all over the place,” he said.

The gallery now possesses the same lighting system that the MOMA in New York uses, along with twice the ceiling height. It can now accommodate much bigger works and exhibitions.

It’s also opened up the type, and scale of artists SAW can work with. SAW’s inaugural exhibition in the new space featured 11 different local and international artists together, an exhibition St-Laurent describes as, “something we couldn’t have remotely envisioned in our old space.”

Club SAW has also been able to participate in the city’s music scene more than ever before since the renovations, attracting numerous local and internationally recognized artist groups. JUNO winning A Tribe Called Red is one of the many acts to hit the stage at Club SAW. “From film screenings to punk rock shows, we’ve been able to do it all now,” says Noreau.

Before the COVID-19 crisis, the renovations had given the artist-run organization more freedom. “We aren’t so reliant on grant money essentially to fund our projects anymore,” says Noreau. SAW’s renovations enabled them to fund upcoming projects more independently, and given them more control over their programs.

One key venture is the gallery’s Nordic Lab which was expected to open in June.

The lab will be a research and production space for artists from circumpolar nations. In addition to programs in Ottawa, the Nordic Lab will forge collaborations and promote exchange between Indigenous and non-Indigenous communities in the North and the South along with partners in Scandinavia and other circumpolar nations.

It is also intended to grow the scope of SAW’s programming by expanding research and production for artists. As part of the Nordic Lab, SAW has acquired state of the art screen printing equipment. This means that SAW will be able to work with artists who do screen printing.

This program will allow SAW to, “support artists in a more meaningful way,” according to St-Laurent.