3 days ago 0 4 min read
We use cookies to provide a personalized experience for our users. By continuing to browse this site, you give consent for cookies to be used.
Got it!
Home > News > Science > Those bright white streetlights are part of Ottawa’s conversion to LED 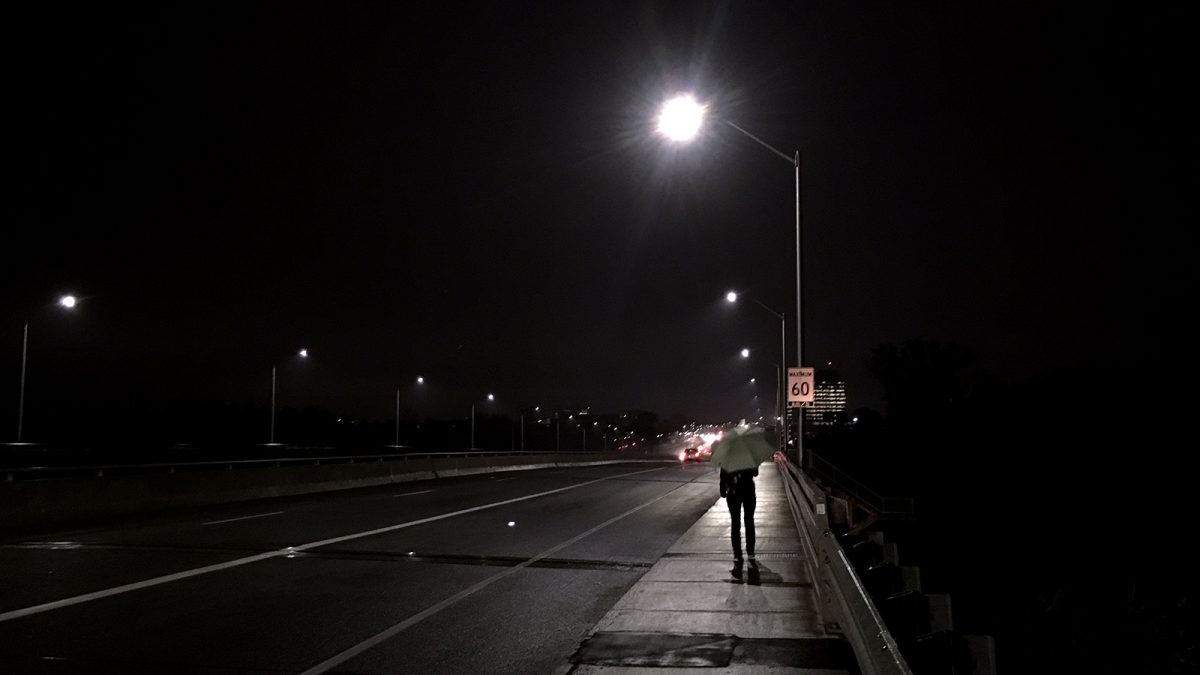 Heron Road has already been converted to LED, so the road is lit bright white. [Photo © Louisa Simmons]
Environment

When night falls in Ottawa the street lights turn on and now most of them are a much brighter white.

The City of Ottawa is partnering with Envari (a business affiliate of Hydro Ottawa) to convert 58,000 street lights to energy-saving light-emitting diode (LED) technology by 2020. While the project is well underway, there are concerns that the blue-white light produced by the LEDs is not the right choice to illuminate the city.

Adnan Khokhar, chief energy and infrastructure services officer for Envari, says that they are on track to complete the LED conversion on time. “I’d say 55 to 60 per cent of our lights are now converted,” he says. “The city’s happy … with the maintenance. They’re very happy with the conversion total.”

According to a report by Envari, the project will reduce the annual cost to operate and maintain city street lights by $5 million. It will also reduce the amount of energy required to operate the lights by 60 per cent, reducing the city’s carbon footprint by more than 1,000 metric tonnes of carbon dioxide every year.

Vi Bui is the Managing Director for Ecology Ottawa, a non-profit organization concerned about climate change and sustainable communities. She says that the organization is “supportive of any initiatives the city takes to reduce greenhouse gas emissions.”

In addition to energy savings, LEDs significantly reduce the city’s electricity costs. In a 2015 pilot project on Carling Avenue, the city managed to shave $72,000 from its annual electricity bill.

According to an analysis by Capital Current, LEDs are expected to last 17 years if running 12 hours each night, whereas HPS bulbs would only last about four and a half years, and metal halide bulbs only about three years.

As more streetlights are converted to LED the city saves consistently more on the costs to illuminate them, but also in the costs to maintain them. Some of the maintenance savings come from the reduced materials required, as the LED bulbs outlive their counterparts significantly, but also in the labour charges associated with sending crews to change bulbs once they die.

Mayor Jim Watson has said in a media release that he is “thrilled that the city is able to reduce its energy consumption and costs,” but others, like Robert Dick, say that the bright white LEDs have some potentially adverse effects.

Dick is the president of the Canadian Scotobiology Group, and the CEO of The Canadian Lighting Company. He says that warmer LEDs could alleviate the impact of white light.

“The mantra of the industry is really for bright and white [light],” Dick says. “Once you get away from that … you can have considerable savings and also a reduction in the ecological impact and the impact on human health.”

Bright white lights, Dick says, are created by mixing yellow and blue light. The blue component is what can be harmful.

When it gets dark the body releases hormones that fight infection and disease, and store or forget the day.

“If you have bright light throughout the night, and particularly blue light, then the hormones that do all these rejuvenating tasks are suppressed,” Dick said.

The City of Ottawa is using slightly more yellow LEDs registering at 3000 Kelvin on the colour temperature scale in residential areas, while arterial roads use more blue 4000 Kelvin LEDs.

Dick says, “what the city asks is that the consulting company [selects] and designs the lighting system with white light,” which limits their choices. He says that there are LEDs that can imitate older, yellower lights better than the current ones, but to do that the city would have to rethink its lighting strategy and replace its lights again.

While Dick says he thinks the city could choose better LEDs, he says the conversion project is a step in the right direction: “I believe from the studies and the work I’ve done, LEDs are the future.”