8 hours ago 0 4 min read
We use cookies to provide a personalized experience for our users. By continuing to browse this site, you give consent for cookies to be used.
Got it!
Home > News > Ottawa > Tim Hortons drive-through riles neighbourhood 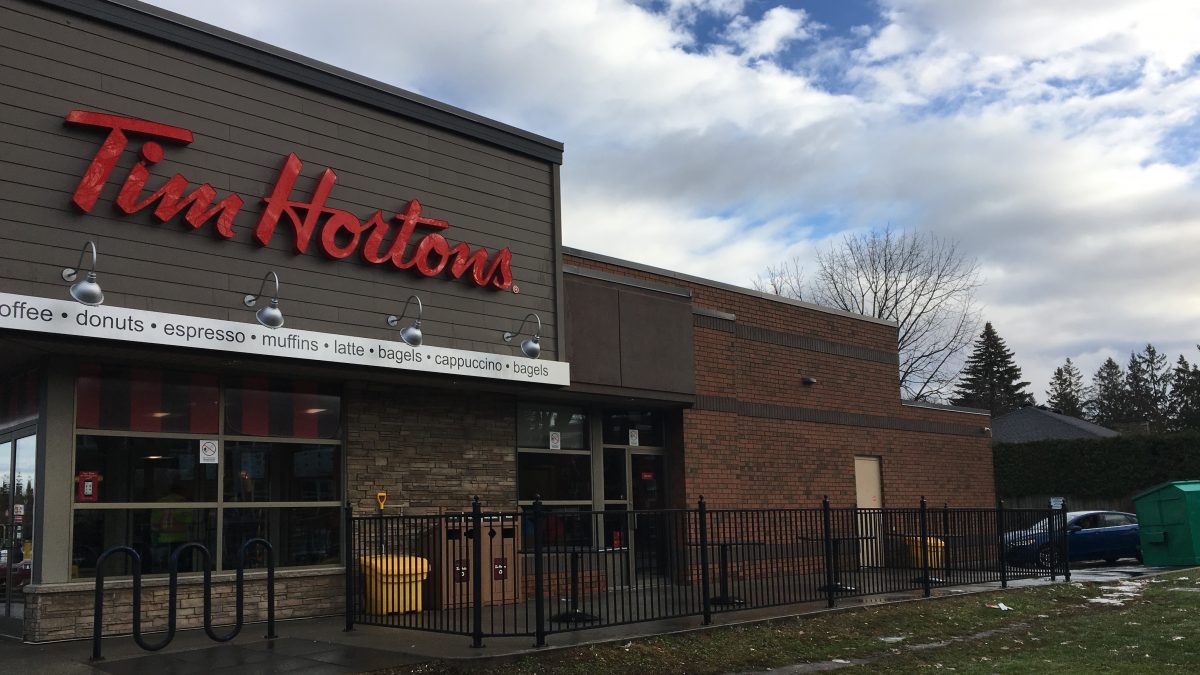 Residents of nearby communities are bothered by the renewal of the lease for the Tim Hortons located at the corner of Alta Vista Drive and Dorion Avenue because of the safety hazards related to traffic congestion at the entrance to the drive-through. [Photo © Rachel Morgan]
Community

It was described recently, when controversy flared in Fredericton, N.B., as the “most Canadian traffic issue” the country faces: congestion caused by a Tim Hortons drive-through.

Now the residents of Ottawa’s Riverview Park neighbourhood, just east of the Rideau River, are concerned about a traffic hazard caused by a Tim Hortons located at the Alta Vista Plaza.

Concern arose in July when a sign announced a proposal to extend the lease for the Tim Hortons, its parking lot and its drive-through for the next 21 years.

Residents say they’re frustrated over the use of Dorion Avenue as an extension of the drive-through when traffic builds up at peak times at the busy coffee and donut shop.

“The issue is safety,” said Riverview Park resident David Knockaert. “What happens is, if someone just wants to use the road for the purposes intended — to drive — when you encounter the line of vehicles, your natural tendency is to drive past them.”

He added: “You treat them as if they were parked cars, but because it’s a relatively narrow street, when you pass them, you are driving into oncoming traffic.”

This is not the first time that the Canadian coffee chain has faced zoning issues in the capital. In 2006, the City of Ottawa was planning to ban the construction of any drive-through Tim Hortons on certain main streets because of spillover cars blocking roads and sidewalks.

“They (idling cars) straddle the sidewalk,” he said. “Which means pedestrians can’t get by, bicycles can’t get by, and it creates a safety hazard, particularly in the winter.”

A similar issue arose in Fredericton this fall. City council there proposed a $40,000 solution to create a “turnabout” leading into the Tim Hortons drive-through. However, construction was put on hold after a debate over whether the business owner or taxpayers should be responsible for the cost. The issue is still unresolved.

In the case of the Tim Hortons in Riverview Park, the city’s committee of adjustment recently granted the 21-year lease extension. Ultimately, this allows the continued use of Dorion Avenue as an extended drive-through.

But the problem doesn’t end there.

The restaurant was built in 1996 and, at the time, was in accordance with city bylaws.

However, said Cloutier, “if there were an application today, it would not be compliant.”

Cloutier said he is not a big fan of drive-throughs as they contribute to many traffic problems.

The manager of the Tim Hortons declined requests for comment about the controversy.

Knockaert recently wrote an editorial in the Riverview Park Review, the community’s newspaper, contesting the decision made by the committee. He said complaints about the drive-through from residents of the community weren’t given an adequate hearing.

Cloutier said there are still problems to be addressed.

Before the decision made by the committee of adjustment, at least three letters were written opposing the proposal. Another two residents attended the hearing in person.

“Is it going to be resolved?” Knockaert asked himself. After a pause he responded, “I don’t think there’s a will to resolve it.”

Although Knockaert said he thinks his chances of changing the committee’s decision are very low, he wants to ensure that the community is aware of the issues at stake.

And his October editorial, he said, was written to keep the controversy alive.