3 days ago 0 4 min read
We use cookies to provide a personalized experience for our users. By continuing to browse this site, you give consent for cookies to be used.
Got it!
Home > News > Transit > Trees get the chop as construction of Stage 2 of LRT proceeds through Carleton campus 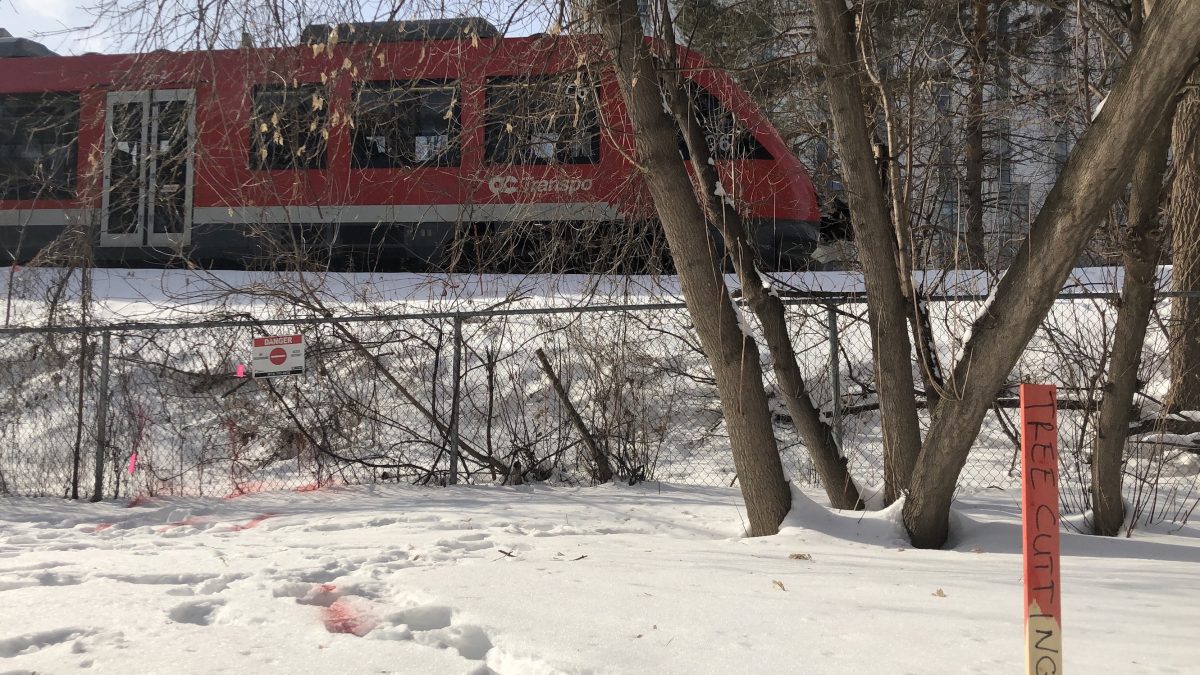 Alongside the Trillium Line that runs through Carleton’s campus, trees have been marked and are waiting for the axe to fall. [Photo © Kimberley Moriarity]
Development

Pink spray-painted lines in the snow and wooden stakes marked the spot where some 50 mature trees were to be felled on Carleton University’s campus along the Trillium train line in preparation for Stage 2 of Ottawa’s light rail transit (LRT) expansion.

And trees are also going down elsewhere, says Juan Pedro of the Greenspace Alliance of Canada’s Capital. He says he sees heavy machinery and toppled trees while driving along Highway 174 on his way home to Orléans.

“It was heartbreaking. I remember one weekend seeing beautiful trees covered with frost and snow alongside Highway 174 and then a couple days later there were these big machines lined up and they started to literally mow them down,” Pedro said.

Pedro has been living in Canada for more than 30 years and got involved with Greenspace Alliance when the Minto Group cleared a small forest in Orléans to build 500 townhouses.

Construction along the Trillium Line will be done by TransitNEXT, a subsidiary of SNC-Lavalin and is to start May 4. It will add a second track.

Members of the Carleton community were notified of the tree cutting plans in a group email sent out Feb. 10 by Michel Piché, the university’s vice-president finance and administration.

“The City of Ottawa has issued a notice to residents confirming plans to remove some trees between the Greenboro Station and Carleton University. This work is required before construction of Stage 2 of the new light rail transit (LRT) line,” the message said. “Some trees and shrubs on Carleton land will be impacted. A second phase of tree removal from city land is also planned for fall 2020.”

Piché said Carleton will develop a restoration plan to replace the trees and shrubs after the LRT expansion is completed in 2022.

About 50 trees were to have been removed on campus between Feb. 17 and 21 within the rail corridor right-of-way which is 30 metres wide, Michael Morgan, the director of the rail construction program for the City of Ottawa, said in an email exchange.

The chair of Greenspace Alliance of Canada’s Capital, Paul Johanis, said it hurts to see trees down all over the city but the LRT will be a valuable gas emissions reduction asset to the city.

Pedro said that with more planning this expansion could have been done with less damage but given a history of delayed infrastructure the city is pushing the plan through with no regard to wildlife or vegetation.

“They just want it done and done quickly,” Pedro said.

Jennifer Humphries, a co-chair of the Glebe Community Association Environment Committee, said she hopes city planners have a plan for replanting mature trees rather than saplings.

“It takes 10 years, 20 years, 30 years to grow a tree that will actually provide canopy,” said Humphries.

There are different bylaws and protocols that help protect trees during times of construction.

The Tree Protection Bylaw was approved on Jan. 28 of this year and includes a responsibility to protect trees during construction meaning there has to be the proper protection when working around trees.

Humphries said that the bylaw requires there to be barriers put on the trees and their roots in the critical root zones.

There is also a protocol for wildlife protection during construction.

Section 2.2 of the document states the impacts of site clearing will be greater during sensitive times of the year. For example, during the winter “hibernating wildlife may be physically unable to escape from the site or may freeze or starve to death if forced to leave their dens and food caches.”

“I don’t think there has been much respect that has been given to the vegetation and wildlife to at least minimize impact,” said Pedro, “it could have started six months later.”

Morgan wrote in an email that TransitNEXT will produce a restoration plan but only once the construction of the project is complete.

“There is not enough land available on the Trillium Line to replace all the trees, as a result, TransitNEXT will undertake a Tree Compensation Plan of one to four tree replacement paired with a $1.5 million financial contribution … to support the development of Ottawa’s urban canopy in order to achieve a net value of two replacement trees for every one removed,” Morgan wrote.

Gary Nower, the assistant vice president of Facilities Management and Planning at Carleton, said the City of Ottawa is working with the university to ensure trees get re-planted.

“There is a one for one replacement of any trees that are on Carleton’s property by the city but we are hiring a landscape architect as we speak to prepare a restoration plan for the university,” Nower said.  Notably, many of the trees on campus that would appear to be on Carleton property are actually on the city-controlled right-of-way along the tracks.

Residents like Pedro and Humphries said they think a functioning transit system is critical in Ottawa but there must be a relationship of respect for both vegetation and wildlife in the process.

“This is an emblematic example that is visible and should be a big red flag of how the city operates and the need for a change,” said Pedro.