3 days ago 0 4 min read
We use cookies to provide a personalized experience for our users. By continuing to browse this site, you give consent for cookies to be used.
Got it!
Home > News > Seniors > Frustration builds in Manotick as truck traffic safety concerns persist 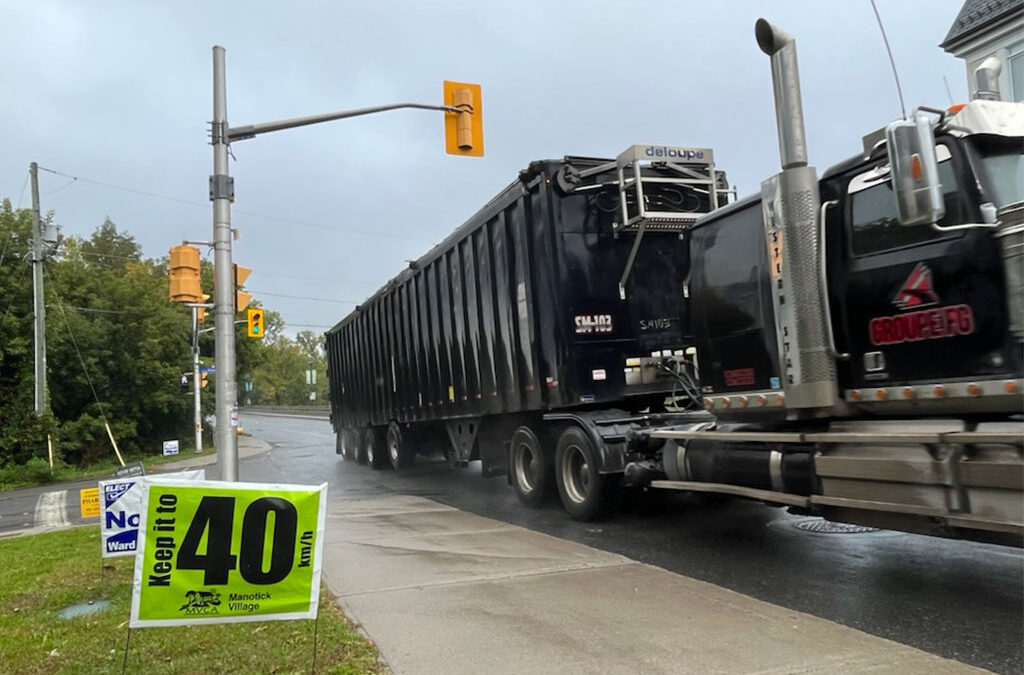 A large truck barrels down Bridge Street in the quaint village of Manotick on Sept. 26. Around 800 trucks are travelling here daily. [Photo © Madeleine Van Clieaf]
News

Manotick residents want the next city council to end the huge volume of heavy trucks crossing the Rideau River through their small, historic village. With 800 trucks daily driving down Bridge and Main streets, they say the vehicles have become a major safety and health concern.

“I actually have had to help several ladies cross because they don’t feel safe, even at Main Street with the pedestrian lights,” said Patti Bourgaise, a local resident and vendor at the Manotick Farmers Market. “The trucks are just flying through there.”

The Manotick Village and Community Association studied the heavy construction vehicles and commercial trucks on Bridge Street a year ago and presented its findings in a report to Ottawa council. Actions were discussed, but no timelines set.

The association found around 90 trucks per hour drive this two-lane route, compared to the 14 pedestrians walking the sidewalk each hour.

It also found an average of eight trucks drive over the sidewalk while turning at the intersection of Bridge and Main as the narrow and historic street makes corners difficult for longer, wider trucks with flatbeds and floats.

The area is lined with an elementary school, two retirement homes, a church and many small businesses and homes.

The proposed actions discussed included restricting traffic through the village from 11 p.m. to 6 a.m. and hiring an expert to review the intersection at Bridge and Main to improve pedestrian safety.

Recently, a group of seniors living along the truck route in the Manotick Place and Miller Seniors Apartments recently organized an anti-truck protest to voice their road safety and health concerns.

They want improved safety measures to lower the risk for seniors and other pedestrians and to improve walkability in their high-density area. Monty Doyle, one of the protest organizers, said that, in the long term, they want to remove Bridge Street’s designation as a truck route to cross the Rideau River.

Bridge Street is one of three nearby truck route designations to cross the river, south of the Vimy Memorial Bridge and Hunt Club Bridge. The road acts as a connection between Highway 417 and Highway 416 and is a designated truck route by the city. Many of the trucks are construction vehicles and are connected to new developments in Barrhaven.

“They (residents) want to go across the street to go to church on Sundays. I mean, it’s so fundamental, they want to walk to the Giant Tiger to get their groceries, pick up a quart of milk, they should be able to do that. But they can’t now because of the dangers associated with crossing the streets,” said Doyle.

Aside from the physical dangers, Doyle said that the noise and air pollution created by the trucks is constant throughout the daytime and often wakes residents up in the morning.

“The noise is terrible, like the pollution from it, the noise from it, people who live immediately on Bridge Street can’t have their windows open at any time of the year, because of the noise and the dust pollution — because of the diesel fumes that come in,” Doyle said.

It has been a year since the release of the report and the Manotick Village and Community Association hopes the new city council will be more active in addressing the issue.

“We feel the urgency. It’s starting to become something that needs to be dealt with in our community, as our community is growing. And these vehicles, they need to be routed,” said Irene Staron, president of the Manotick Village and Community Association.

The association was not involved in organizing the recent protest.

Staron is optimistic there will be change soon as she has had meetings with all of Ward 21’s councillor candidates in the upcoming Oct. 24 election — Dave Brown, Leigh-Andrea Brunet, Patty Searl and Kevin Setia — to give them background on the issue. All have listed truck traffic and road safety as top priorities in their campaigns. (For more election information please visit the Ottawa municipal election page.)

In an email to Capital Current, outgoing city council Scott Moffatt said the truck issue has a long history with “no easy solutions, unfortunately.”