1 week ago 0 9 min read
We use cookies to provide a personalized experience for our users. By continuing to browse this site, you give consent for cookies to be used.
Got it!
Home > Racism > Ottawa vigil for Atlanta shooting victims raises cry against anti-Asian racism 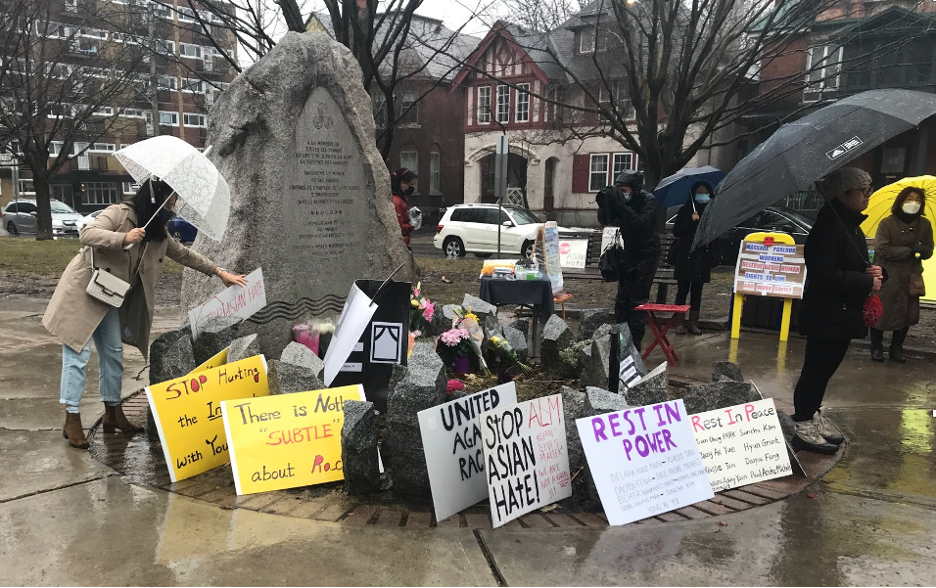 A woman places a sign at the memorial site in Minto Park, where people gathered for a vigil on a rainy March 28 to remember the victims of the Atlanta shootings and to denounce anti-Asian racism. [Photo © Erin Wai]
Canada

The rain poured down on dozens of people huddled under their umbrellas, crowded around the monument to murdered women in Ottawa’s Minto Park. A young boy left the cover of the umbrella his father was holding and approached the memorial to place another bouquet among the display of signs and flowers already laid out.

A group of young adults carried a sign that read “STOP ASIAN HATE” and an older woman stood before the crowd and spoke of her own experiences of discrimination as everyone leaned in to hear what she had to say over the patter of the rain.

Individuals of all ages gathered despite the wet weather in the Elgin Street park last month to pay tribute to the eight victims — six of them Asian women — of a mass shooting in Atlanta, Georgia, March 16.

The event was organized to mourn those lost and to rally against misogyny and the rising anti-Asian racism since the pandemic began last year.

“As an Asian-Canadian woman, and just seeing the rise in the hate crimes, and especially the shooting in Atlanta, it really hit very, very close to home — and I just couldn’t stay home and not do anything,” said Sharron Deng, one of the organizers of the event.

To avoid a large gathering because of COVID-19, the vigil was to be an event in which people were expected to come, pay their respects, then leave. People were constantly moving in and out of the park, but some stayed to talk and share stories.

“Racism doesn’t really know borders,” said Deng. “Racism happens every single day.” She said she gets looks and comments like “go back to your country” or “why are you here” all the time walking down the street.

“It makes me feel like I don’t belong,” Deng added. “I was born here; I don’t have anywhere else to go. This is home.”

Ye, a woman who asked not to be fully identified for privacy reasons, helped organize the event. She said she felt empowered and hopeful after attending the vigil.

People “come out and pay tribute, but they also stay to have conversations,” she said, adding, “and that’s one of the most important outcomes that I can see.”

“This is the first time I saw the Asian community came out to speak out together,” said Joe Zhang, a Chinese-Canadian man who also helped organize the event.

Ye said the vigil brought attention to “people who don’t usually get paid attention to. Asian communities are considered model communities, but we have to recognize that not every Asian is like those who have been established. And it’s important for them to be heard and to be seen.”

The crowd that came out to the vigil was mostly people from Ottawa’s Asian community, but others showed up, too, to pay their respects and demonstrate solidarity.

An Indigenous woman came with a sage smudge to bless those attending the vigil.

“I think it’s an opportunity for everyone to reflect on the importance of justice for the Asian community, but also for other marginalized communities,” said Alvis Choi, a Hong Kong Chinese and another event organizer. “We really have to start thinking about these issues in a more intersectional way. The issues are not single issues.”

Flyers with statistics about increased anti-Asian racism in Canada since the beginning of the pandemic, as well as resources to respond to the racism, were handed out to those attending the vigil and posted on a board next to the monument. The use of the term “China virus” to describe the COVID-19 pandemic — a phrase uttered often by former U.S. president Donald Trump — has been widely condemned as driving anti-Asian racism around the world.

Among the signs displayed around the monument were messages calling out anti-Asian hate and misogyny. And there were statements of solidarity with the Black and Indigenous communities during this time of rising awareness about deep-rooted societal racism.

“This is really the beginning. I want this to be a movement and not a moment — because it’s not just the one event, it’s part of something much, much bigger,” said Deng.

“We need to build allyship,” she added. “If there’s injustice with the Black community, with the Indigenous community, we as Asians have to stand up for them, as well. I want everyone to just be more educated and to just accept that racism is here and we need to move forward.”