4 days ago 0 6 min read
We use cookies to provide a personalized experience for our users. By continuing to browse this site, you give consent for cookies to be used.
Got it!
Home > Sports > With love: Venerable Ottawa Tennis and Lawn Bowling Club nets a major restoration 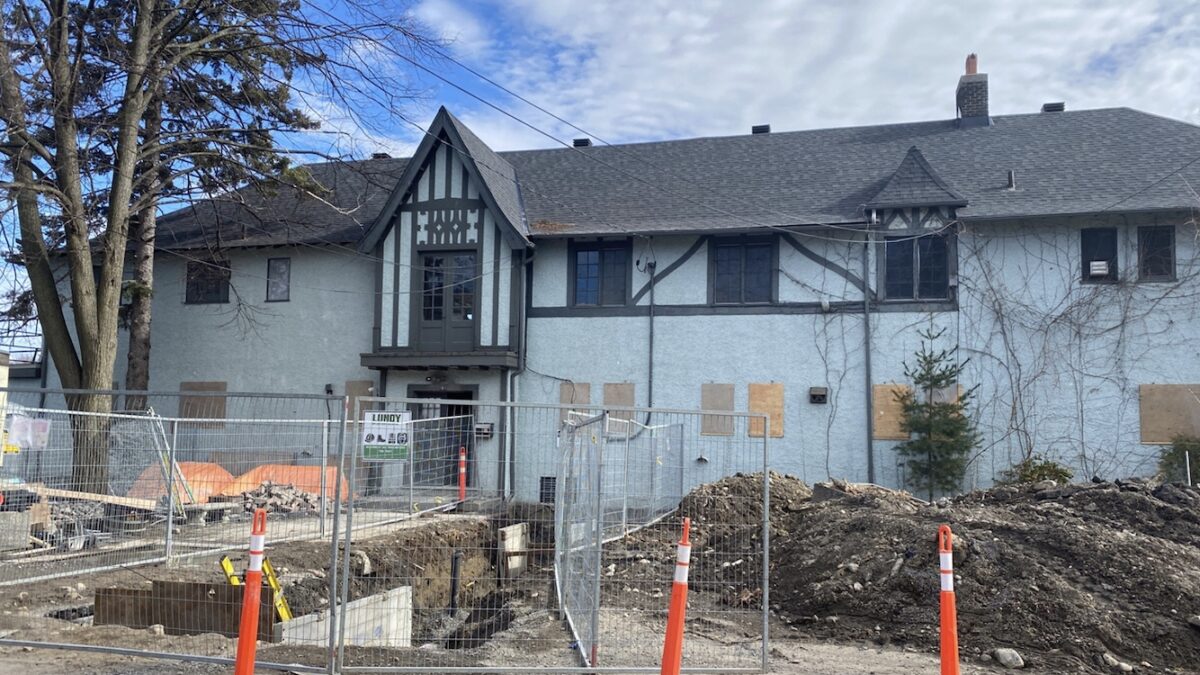 The Ottawa Tennis and Lawn Bowling Club in Old Ottawa South, recently recognized as a heritage building set to mark its 100th anniversary in 2023, is undergoing construction as part of a major restoration project. [Photo © Makayla Morgan]
Community

The Ottawa Tennis and Lawn Bowling Club’s 99-year-old building in Old Ottawa South is undergoing a restoration after coming to the end of its life cycle.

Founded in 1881 after tennis began to rise in popularity in Ottawa, the OTLBC moved to Cameron Avenue where it will have stayed for 100 years in 2023. This year marks the OTLBC’s 141st birthday, making it the second oldest tennis club in Canada.

The club, located between Brewer Park and the Rideau River, is considered a neighbourhood jewel by many in the community.

With 18 clay courts, the clubhouse operates seasonally and offers a variety of summer activities, including swimming and beach volleyball. It also provides dining and other relaxing experiences.

The restoration began in 2019 after the City of Ottawa recognized the club as a heritage building and the OTLBC received a $375,000 grant from the Department of Canadian Heritage. The club also received $100,000 from Employment and Social Development Canada to help meet accessibility requirements.

“The Ottawa Tennis and Lawn Bowling Club, 176 Cameron Avenue meets all three criteria in Ontario Regulation 09/06 for designation under Part IV of the Ontario Heritage Act. The building has design value as a good example of a well-preserved recreational clubhouse with Tudor Revival influences, has historical value for is association with the growth of sports for the middle classes in Ottawa, and has contextual value as a landmark building and important community hub in Old Ottawa South.”

“Every year, the club (would) freeze and thaw in the spring, and you can only imagine the damage that added to the building, which is also entirely wood,” said executive director Maria Pierre-Noel. “And so, every spring, it’s like a big cottage. We (have) to come back and do $30-50,000 of repairs.”

Plans for the restoration started when Pierre-Noel had to remove a ceiling tile over the kitchen and noticed how deteriorated the inside of the building truly was. So, about six years ago, “we just started creating a plan, like a long-term vision, to see (if) one day, we should be able to do it,” she said.

However, initial faith in the project and the magnitude of the task was scarce.

“A few years ago, (the club) switched from being basically a corporation with shareholders to going not-for-profit,” explained Ross Eaman, a member of the OTLBC and a history professor at Carleton University, who has written about the club’s past.

Pierre-Noel further said the not-for-profit status made it difficult to acquire funds for the project. However, once the OTLBC was designated a heritage building, there was a light at the end of the tunnel.

“I think it was such a big project that members were like, you know, ‘You’ll never get the $2 million fundraised,” Pierre-Noel explained. “So, when members knew that we had that initial commitment from the federal government, then they started to galvanize.”

With overwhelming support from the community, the OTLBC managed to meet its goal of raising $1 million in 2021 to begin Phase One which focused on the ground floor of the building.

“There’s such a strong sense of community,” added Pierre-Noel. “Grandparents bring their grandchildren and then those children pull their parents in and then it’s a multi-generational experience.”

“The club’s philosophy is to make sure that this is an as accessible place as possible for your average family, your average person,” said Eaman, looking back on his own 50-year membership with the OTLBC. “So it is wonderful to see that it’s going to be there for generations to come.”

The OTLBC is under construction and, with rising costs, is now looking at up to a $3-million budget for the entire project.

“For as long as this place exists, there will always be an opportunity for a sense of belonging,” said Pierre-Noel. “As humans, we all look for that sense of belonging to something that is greater than just a home and a job. I think this place is that meaningful for people.”